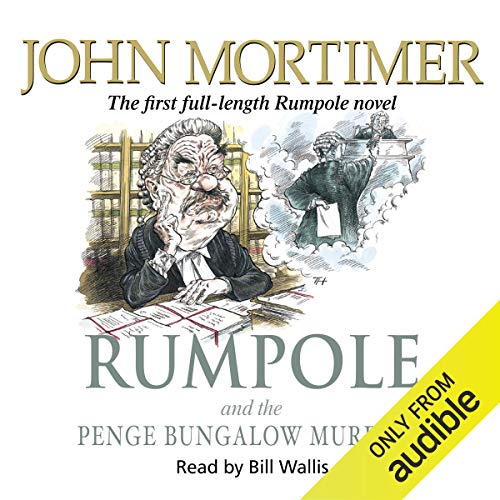 Horace Rumpole - cigar-smoking, claret-drinking, Wordsworth-spouting defender of some unlikely clients - often speaks of the great murder trial, which revealed his talents as an advocate and made his reputation down at the Bailey when he was still a young man.

Now, for the first time, the sensational story of the Penge Bungalow Murders case is told in full: how, shortly after the war, Rumpole took on the seemingly impossible task of defending young Simon Jerold, accused of murdering his father and his father's friend with a German officer's gun. And how the inexperienced young brief was left alone to pursue the path of justice, in a case that was to echo through the Bailey for years to come.

What listeners say about Rumpole and the Penge Bungalow Murders

This is John Mortimer's beloved character's quintessence. The case Horace Rumpole did ( alone and without a leader) that was his shining star. Quite humourous at points and always intelligent, this is one of the best books in my collection.

The Truth Will Out

Finally, after decades of hearing about this famous trial conducted by the Bard of the 'Bailey, "alone, and without a leader", I know the truth about the absent Leader.
Of course, I have know nearly from the start that Rumpole hardly needed a Leader and I had guessed that SWMBO's dearest "Daddy" might be at the heart of the absenteeism, but it is another thing to know the truth. And, as every good trial lawyer will tell you, the truth will come out, no matter what we might do to impede it (albeit in "the best traditions of the Bar"). Still, like all great secrets, shrouded in the mists of myth for decades, when it outs, the truth is not always as surprising as we might hope. That's how I felt about this title.
(There is a bit of a SPOILER coming, so skip the next paragraph now if you don't want to know).
The plot is as good as ever and Rumpole is as cynically and brutally brilliant as ever. But, like all great yarns, it might have been better for this one not to be told. For once I found myself analysing the evidence, which I've never felt the need to do with Mortimer's previous excursions along crime alley. I felt a hint of resentment that the bloodstains I heard so much about, and about we knew so little, were not front and centre. However, I was pleased to learn of the origins of the relationship between Rumpole and Chateau Thames Embankment and his defence of the ever grateful Timsons.
The late Bill Wallis' characterisations are terrific, especially the women. His Hilda is wonderful, but only to be out done by his Dodo. His Rumpole is good too, but no one can capture Horace like Leo McKern, of course. That is not a criticism however, merely a fact.
Again, I am pleased that I listened to this tale, but in the end, if I did not know the whole truth, I would be only a little less enriched.

Again a wonderful listen but not his best. If you are a Rumpole fan you will have to listen to this case, often mentioned in his other works. Bill Wallis does a great job as the narrator. I highly recommend all the Rumpole books.

This is a terrific story, exceptionally well told. I listen on my way home from work, in my car. Made the traffic jams bearable! terrific storyline and great intelligence and wit.
I will listen to more Rumpoles from now on.

The story of Rumpole's first case

A really enjoyable story of Rumpole's first case - the penge bungalow murder - Mortimer did very well telling the story which is alluded to a thousand times in prior stories.

The New Voice of Rumpole

Would you listen to Rumpole and the Penge Bungalow Murders again? Why?

Not really. If you've read any Rumpole books, you already know he's going to win, but it was fun finding out how he did it.

What does Bill Wallis bring to the story that you wouldn’t experience if you just read the book?

Bill Wallis, as I implied in my title is the new voice of Rumpole, the late Leo McKern having been the holder of that title heretofore. As much as McKern embodied the Rumpole character however, I doubt that even he, great actor that he was, could have surpassed Mr. Wallis in his ability to create a voice and a distinct personality for each and every character in the book. His was a truly awesome performance.

I smirked and tittered throughout. I laughed aloud, many, many times.

A must have for all true Rumpoleans.

A little too long. Probably for Rumpole fans only

I like John Mortimer's writing and I am a great fan of the original Rumpole TV series, starring Leo McKern. However, in spite of wanting to like this book, I found it a little tedious. For me it was too long and the story line was not strong enough. It might be that I was so keen to hear about Rumpole’s most famous case that my expectations were too high, or it might have been that I have become used to more complex and fast moving stories. Either way, I would only recommend this for Rumpole fans that want to finally find out what happened in that Penge bungalow. I would however like to give great credit to Bill Wallis, the narrator, who did a great job in providing believable and unique voices to all of the characters.

pleasantly surprised at how much I enjoyed this

Would you consider the audio edition of Rumpole and the Penge Bungalow Murders to be better than the print version?

Having never found time to watch or read any Rumpole I was pleased to use a period of air travel to listen to this adaptation. I was committed to listening to the full story almost immediately.

The various voices of the different characters were excellent.

Which character – as performed by Bill Wallis – was your favourite?

Bill Wallis is a fantastic narrator of this classic Rumpole tale, he brings the story to life.

I'm a big fan of the Rumpole series which provide excellent observation of human behaviour and attitudes especially the nature of the legal profession which I'm not convinced are totally bent on justice for the person in the dock. Bill Wallis in my opinion gives the best characterisation and voice to Rumpole especially to that of Leo Mckern of the long running TV series which I've watched at least three times.

Surely a cast of thousands!

Bill Wallis gave a lesson in storytelling. His range and realism of character voices astounded.

Yes - good to get the Penge Bungalow storey at last as mentioned in all preceding Rumpole books.

Have you listened to any of Bill Wallis’s other performances? How does this one compare?

Rumpole and the penge bungalow murders

This is a great listen. I love the Rumpole stories and this gives a good bit of background to the characters many of us know and love, as well as the story of Rumpole's oft quoted first legal triumph 'alone and without a leader'. Whilst you could listen to Rumpole and the Penge Bungalow Murders as a standalone novel, I think that reading/listening to some of the other Rumpole books first would give you a more rounded enjoyment of this story.

As usual Bill Wallis does an excellent job of narration, he embodies the characters beautifully and really adds to the audiobook experience.

Bill Wallis was a fabulous voice actor, of great versatility, much missed. Most Rumpole is in the form of short stories, in keeping with his origins as a TV series but the character was too interesting to leave on the small screen. John Mortimer, luckily, didn’t let him disappear there. The ongoing enigma of the Penge Bungalow Murders (“defended alone, and without a leader”) come out of mythology into a novel.

At last, light upon the leit-motif that runs throughout the Rumpole compendium. At last, the knowledge of why Horace was "alone and without a leader". At last, an understanding as to why the Timpsons happened to use the Equity Court "old taxi". At last, the detailing of how She-Who-Must-Be-Obeyed transferred from the African Continent to the Gloucester Road. Totally satisfying!