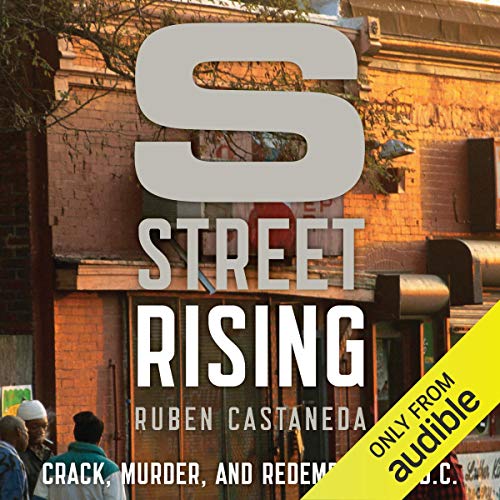 During the height of the crack epidemic that decimated the streets of D.C., Ruben Castaneda covered the crime beat for the Washington Post. The first in his family to graduate from college, he had landed a job at one of the country’s premier newspapers. But his apparent success masked a devastating secret: he was a crack addict. Even as he covered the drug-fueled violence that was destroying the city, he was prowling S Street, a 24/7 open-air crack market, during his off hours, looking for his next fix. Castaneda’s remarkable book, S Street Rising, is more than a memoir; it’s a portrait of a city in crisis. It’s the adrenaline-infused story of the street where Castaneda quickly became a regular, and where a fledgling church led by a charismatic and streetwise pastor was protected by the local drug kingpin, a dangerous man who followed an old-school code of honor. It’s the story of Castaneda’s friendship with an exceptional police homicide commander whose career was derailed when he ran afoul of Mayor Marion Barry and his political cronies. And it’s a study of the city itself as it tried to rise above the bloody crack epidemic and the corrosive politics of the Barry era.

S Street Rising is The Wire meets the Oscar-winning movie Crash. And it’s all true.

I use the metro station near the location on S Street the author spoke of, so I'm very familiar with the area, as it is now. Listening to the book while walking to or from the Howard/Shaw metro station while going along S Street is some trippy time travel. The building that housed the Wonderbread Factory is still there, but filled with hipsters who will come out on the sidewalk to buy not crack but something from a food truck. The New Community Church is there too. It isn't too hard to imagine the street in the crack years and thank the Lord that instead of annoying crackheads there are annoying millennials hooked on their phones.

The author also talks about Prince George's County, somewhere I also used to live and work and it was good to jive my memory of the place and time with the story about police abuse he worked on.

The narration is good too and this was one of those hard to put down audiobooks. Before or after this book I was listening to another audiobook on DC history, Dream City. I highly recommend pairing that audiobook with this. There are times when the books sync up regarding the personality that was "mayor for life" Marion Barry and other part of DC in the late 20th century.

I enjoyed the book and story, but the narrator isn't very good. The story is also a bit scattered.