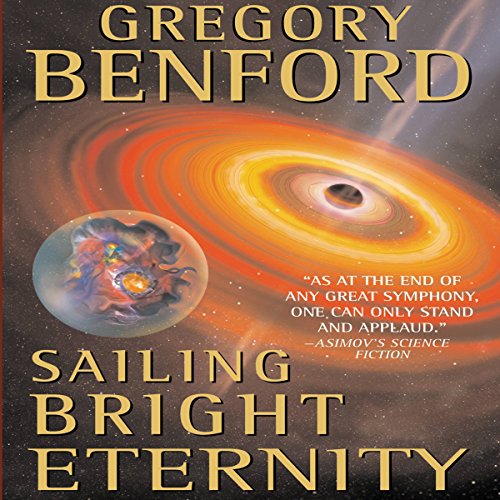 Millennia of conflict between humans and mechs have driven the human race to near-extinction. Now, as the fierce AI mechs begin their final assault on mankind, it soon becomes apparent that three men - three generations in a family of voyagers - are their targets. Toby Bishop, his father, Killeen Bishop, and his grandfather, Nigel Walmsley, each carry a piece of the lethal secret that can destroy their enemies. But hunted through space and time by relentless assassins, they have no idea that they possess the only weapon that can save humanity.

Difficult to out down. Anxious to see how it ends

I loved this hard science fiction novel. The main characters feel real, the narration is detailed and I can see in the mind's eye and feel what the characters feel. Loved every minute of the story.

What would have made Sailing Bright Eternity better?

A nice concise story not filled with irrelavent adjectivable dribble

Anything not Benford. He really turned me off to his books due to the seemingly irrelevant page filling dribble

Generally ok although, were that many narrators really required? Was that supposed to make the book better? Reminded me of the author's page filling adjectives and noncontributing fantasy "scenes".

Disappointment and some anger that it appeared like the author: 1)either had a page goal and tried to just fill the pages with irrelevant fantasy scenes and adjectives to reach the page count; or (2) that he is impressed with himself as to his command of the English language and wanted to demonstrate it by filling page after page of meaningless descriptive "fantasy" scenes.

I slugged my way though all six books with a sense of growing frustration in the hope of seeing a reasonably good ending. The ending was so-so. I thought the author did a disservice to a good concept and an good initial start in book 1. It went downhill from there. If I would have known how the following books were going to go, I would have never proceeded. Maybe it was shear bullheadedness on my part but I slugged my way through all six books. I should have stopped after 2.