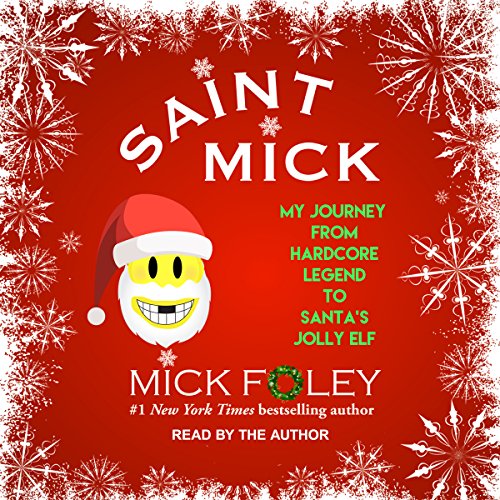 From beloved number one New York Times best-selling author and WWE Hall-of-Famer Mick Foley comes a Yuletide tale like no other.

After a lifetime of putting his body on the line to entertain his dozens (and dozens!) of fans, the Hardcore Legend is paying the price - physically and emotionally. When the final bell on Mick's career tolls, not in the ring, but in a neurologist's office, his future seems far from merry and bright. Until Mick is given the chance to become Santa Claus - not dress up, not pretend, but become Santa - allowing him to rediscover the joy of performing.

Fully committing to his new mission, Mick details the drastic measures he takes to keep the Christmas magic alive for his young children, as well as the many children he meets in his travels who are in need of some Christmas Spirit. In order to fully embrace his new red-suited responsibilities, Mick enters the fascinating world of the Santa subculture, where he hones his Christmas craft while worrying he'll be excommunicated from the Santa world for, among other things, his Santa character being run over by a motor vehicle on Christmas Eve on WWE television.

But with the help of an unlikely elf - eight-time Grammy Award winner Norah Jones - Mick learns valuable lessons about the real power and responsibility of wearing the red suit.

"Based on personal experience, I assure you that if Santa Claus and Mick Foley are not one and the same, they're at least closely related. Don't believe me? Then read Saint Mick, a beautifully written book by a man with a holiday-filled heart." (Jeff Guinn, New York Times best-selling author of The Autobiography of Santa Claus)

What listeners say about Saint Mick

Loved the book
Beautify written shows the importance of caring for others, and the magic that Santa-clause has on children.

Saint Mick is a true Saint

I laughed, I cried, I quoted along throughout my journey into the world of Saint Mick. Such a wonderful audio book of my top 3 favorite wrestlers of all time. Job well done, Saint Mick. Thank you for being the newer version of Mr. Rogers which the world desperately needs right now. And thank you also for having a heart of gold and cherishing your children. They are so very lucky to have you as their father.

Foley Is Not only Good... But Santa as Well

I may be biased, I may have a decent sized soft soft for “Mrs Foley’s Baby Boy”. However!!! I do not give out 5 star ratings “wily nily”. A book has to really touch me, reach within me & elicit a .. “This is freakin awesome” reaction & well, this book definitely touched the olde ticker. I’ve read quite a few Foley books & after not only watching Holy Foley on the Wwe Network & I am Santa on Netflix, i feel like this is what the old Micker was supposed to do post wrestling career. Good on ya Mick for writing this book, taking the journey to truly be Santa and all the other sacrifices that you have had to go thru. In closing....Foley emits the true essence of Santa & therefore.....Is Santa

It made me smile.

I grew up watching Mick Foley as Mankind, Cactus Jack, and Dude Love. This book made me smile so many times while listening to it.

Absolutely awesome!! Excellent job Mick. Listening to the book brings back memories of what the meaning of Christmas truly is

From the modern godfather of wrestling biographies comes a book just as insightful, illuminating, entertaining and well crafted as a 'have a nice day: tale of blood and sweat-socks'. The adage "the mask does not conceal the person, it reveals them" provides one of the points of fascination here, the transformation into a character, coming out of whatever you are and becoming something else, be it a violent masochistic outcast seeking acceptance through pain in an exploding Japanese death match, a stand up comedian, or a kind hearted Santa Clause tossing magic dust, are strikingly similar, they are also a road map to living a life more full than many of us have the courage to try. This is an engaging and heartfelt work by a master storyteller, a book that makes the world bigger, better, and brings into focus the things that are most important.

I have never met Mick Foley and I don't know that it is likely I will ever have the pleasure. But he comes across as one of the kindest, most generous and decent people walking the earth today.

On Christmas Eve, I like to spend some time listening to 'A Christmas Carol' in audio. In 2018 that may be supplanted by 'Saint Mick'. This may be Foley's most heart felt book to date. Some of the stories are funny, some are emotional and all are wonderfully told in Mick's trademark fashion of grace, humor and honesty.

The saddest thing about the narration of this book is the fact that it reminds me that not enough of Mick's books are available in unabridged audio. Doing wrestling promos, it turns out, can translate well to audiobook narration because they both are about telling stories and conveying emotion. Near the end, Mick is fighting back tears and is clearly moved by what he is saying and it enhances the experience tremendously.

Man, Mick Foley just keeps out doing himself when he writes. No need to be a wrestling fan to read this one because it’s about Christmas more than anything else. It’s enjoyable for anyone.

A different look on the hardcore legend

I would suggest this audio book to everyone, whether your a wrestling fan or not, if you've heard of Mick Foley or not you will enjoy this.
After hearing this story you have have a new look on Mick foley and the Christmas season and a total respect for Mick Foley

By far the best audio book I have heard yet! Thank you Mick Foley.

A beautiful Christmas book for fans and non-fans.

Mick's heartfelt look into the world of the Santa Ambassador is both moving and joyful.

Giving cheer to those who forgot the magic

Great fun book. Mick you reminded me that the trick is to spread magic to find the magic. As said in the book if it only reaches one, that's enough. This book has done a lot for me this Christmas. Thank you and merry Christmas.

One of the quirkiest books you could read about a wrestler. Foley has managed to weave his wrestling life with his adoration of Christmas to form this brief but brilliant book. Saint Mick defines Foley's peculiar but mesmerising personality and this book is one to relax with, a story of Christmas as told by the Hardcore Legend-sounds insane but it totally works.

Incredibly well written and perfectly spoken. Professional wrestling can be REAL, as can indeed Santa.

Mick has always been a heroil for me and his love of christmas just make that feeling grow.