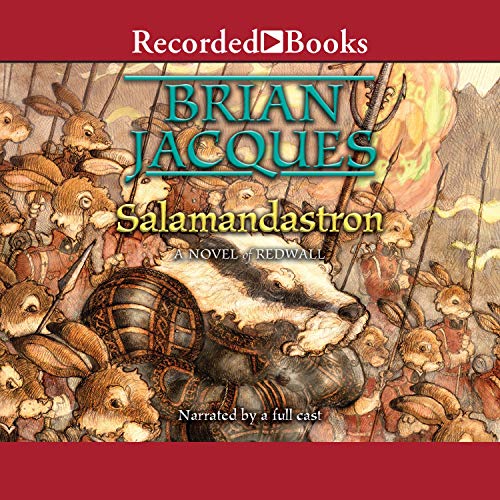 With millions of books in print, Brian Jacques' New York Times best-selling Redwall series is among the most popular sagas of all time. Now the riveting fifth book in the series comes to full and vibrant life in this extraordinary production, featuring the vocal talents of a remarkable cast of skilled performers.

While the good creatures of Redwall Abbey relax during the hot summer, the mountain stronghold of Salamandastron is under siege. Ferhago the Assassin and his band of vicious weasels throw all their fury against Lord Urthstripe the Strong, Badger Lord of Fire Mountain and ruler of Salamandastron. When a lightning bolt uncovers the sword of Martin the Warrior, young Samkin begins an adventure that leads him toward the battle...and toward the ultimate triumph of good.

"The story is gripping....Salamandastron is thoroughly satisfying!" (School Library Journal)
"The epic struggle between good and evil rages on in this continuation of the acclaimed Redwall series." (Publishers Weekly)

What listeners say about Salamandastron

All thats missing is Brian Jaques

I love this series and have read the books since I was young. One of the things that I loved about the audiobooks was the Brain Jaques read the stories himself. For some reason he isn't the narrator of this book. If you've listened to other books in this series you'll recognize most of the same actors. Still a wonderful story and well done. I just missed the voice of Brian Jaques

Would you listen to Salamandastron again? Why?

Brian Jacques works are ones I find myself returning to again and again. I always enjoy the audiobook versions of his books as they are like listening to a radio play version with all the different actors.

What was one of the most memorable moments of Salamandastron?

Too many to count!

I loved each and every moment. Utilizing a full cast allows for a greater depth of listening entertainment. I do prefer the titles that are narrated by Brian Jacques himself, and that is the one thing I was missing from this particular title. Still quality work though!

Absolutely! But who has time for that?

A siege of a mountain, going badly for the defenders.
A quest to save the abbey from the plague.
A journey to recover a lost legendary sword.
And a young girl's journey to find her place in the world.

If you haven't listened to a Brian Jacques Redwall book, you're missing out. A full cast brings to life a wide variety of characters, and the classic good vs evil epic stories are enthralling. My three kids (12yo boy, 8yo girl, and 6yo boy) love the Redwall series as do my husband and I. With so many books in a series, with the same type of characters and the classic good vs evil theme, you'd think that the books would all start to sound the same, but they're all different, there are still surprises, and the characters still delight (and disgust). My one warning is that these are violent books, characters fight and die (good and evil), might not be a great choice for some younger ears.

I originally purchased this book for our son to read because he had read one of the other Redwall books. Being an avid reader, I decided to listen too! Wow! I couldn't stop and before I knew it I had finished the book ahead of him! The full cast truly brings the book to "life" as if its a movie!

I loved it as a kid and loved it as an adult sharing it with my family! what characters and adventures each book brings to life. A masterpiece.

I read some reviews that the book was disappointing because the author didn’t narrate. Although it was odd at first, the full cast and variety of voices, the singing and music, and the clever and engaging story had me hooked just like all the other books. I especially like baby dumble and the hares.
Terribly entertaining and I can’t wait to hear the next in line. I wish I read these with my son when he was reading them.

This is a wonderful book with a bucket load of adventure!!! It takes you on a ride you will never forget.

I love these books. I read most of them to my boys when they were little and I am now listening to them for my own pleasure. Love me some long patrol,wot wot!!

One of the best red wall books

I really enjoy this story, its brilliantly narrated and highly enjoyable for all ages, I'm 26 and its one of my favourite books, the character's in this one are excellent, its a fast flowing story with lots of action and a great climax, enjoy.

Loved it, I really enjoy these Redwall stories

This is has good has the others, though slightly les of the redwallers, but has I love the hares from salamandastron I am worried.
Feel what was happening at Redwall was just a side story though it tries in at the end.
The only problem I had is there is a couple of bits where it returned at a point slightly later than where we left it & you get the feeling that you have missed something like it missed a page, you return in a middle of a battle without knowing how, but you can work out what happened, if you can remember what was happening in that bit last time you were there.
Has with all of this series of books, don't listen with large periods of time between listens, has with so many little stories all linking in unless you have a great memory you might just forget what was happening in each little group, I sometimes forget when it's only a couple of days or forgetting what creature everyone is, didn't help that for some reason I kept picturing ferargo and glitse has foxes and for getting that Aurora was a mole.