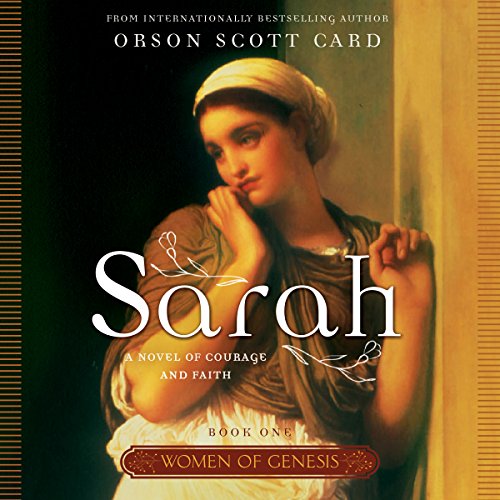 Sarai was a child of 10 years, wise for her age but not yet a woman, when she first met Abram. He appeared before her in her father's house, filthy from the desert, tired and thirsty. But as the dirt of travel was washed from his body, the sight of him filled her heart. And when Abram promises Sarai to return in 10 years to take her for his wife, her fate was sealed. Abram kept his promise, and Sarai kept hers. They were wed, and so joined the royal house of Ur with the high priesthood of the Hebrews. So began a lifetime of great joy together, and greater peril: and with the blessing of their God, a great nation would be built around the core of their love.

Best-selling author Orson Scott Card uses his fertile imagination, and uncanny insight into human nature, to tell the story of a unique woman - one who is beautiful, tough, smart, and resourceful in an era when women had little power, and are scarce in the historical record. Sarah, child of the desert, wife of Abraham, takes on vivid reality as a woman desirable to kings, a devoted wife, and a faithful follower of the God of Abraham, chosen to experience an incomparable miracle.

What listeners say about Sarah

Great bible like story from the women’s point of view

Listened to this with the whole family and we all enjoyed it. Kids: 3 daughters 11, 14 & 20, son 17 plus mom and dad. We even brought it into the house when we got home. Enjoyed the historical fiction taking a bible story from the women’s point of view. Great character development, insightful at times, exciting at times, Aldo a bit of a love story.

this is my required optional heading

The reader does a very good job. Easy to listen to. Enjoyed listening to author's version of the story of Sarah and Abraham.

Amazing story that brings to life the character's we thought we knew, but now know them better.

I really wish the second book in the series were available as an audio book. I have 1 and 3, and would love the set.

That’s biblical fiction goes, Orson Scott card is just the best there is. I love all of his writing, as he is an extremely accomplished writer, but his women of Genesis series have truly touched me.

OSC brings these characters and their stories to life. Abraham and Sarah are now my friends. I highly recommend listening to the afterward as it addresses specifically what others on here have criticized in the telling of this story.

Great story, but this is my last OSC novel

Initially, I was very excited about this book. I enjoy many of Orson Scott Card's novels, and his writing didn't disappoint here.

The reason I decided to write a review was the departures from Scripture. Yes, I know that artists - authors included - take liberties to make a story more dramatic. I suppose what I most took umbrage at was Card's afterword, where he quite unashamedly said that he doesn't believe the Bible to be without error. That stories don't make sense. Well, Mr. Card, "All Scripture is given by inspiration of God, and is profitable for doctrine, for reproof, for correction, for instruction in righteousness;" and the Bible also gives clear warning to anyone who should remove "one jot or tittle." So, if someone changed the Bible from fact to fiction at some point - I do believe God would have caused that error to be struck from history. Otherwise, if the Novie is wrong in some areas, it should not be followed at all. I do believe the Bible to be without error.

Knowing that Mr. Card believes the Bible to have errors in it, and that he also believes the stories written therein to be mainly embellishments or perhaps campfire ghost stories, has decided this reader against purchasing any more Orson Scott Card novels, especially those that take their basis from supposed error-strewn Scripture.