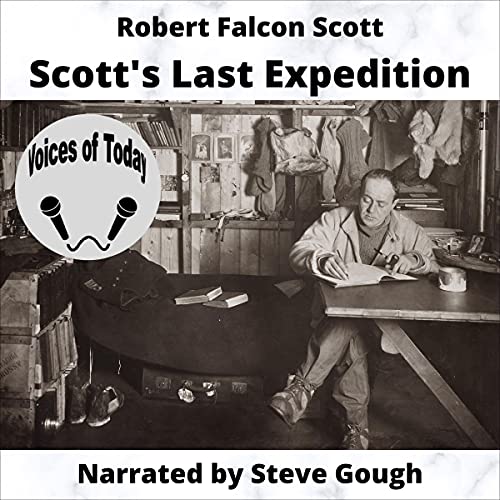 Captain Scott's ill-fated journey to the Antarctic Pole in 1911 is part triumph, part tragedy - an epic tale of heroic endeavor which has inspired books and films over the generations.

Despite the simple outline of the story, Scott and his fellow explorers emerge as richly varied characters, brought to life by the diarist's skill as a story-teller. Scott's journal reaches its moving and dramatic crescendo when the explorers reach the Pole, only to discover that the Norwegian, Amundsen, has beaten them to it by many weeks.

Scott and his comrades turn back, knowing they face not just defeat but hundreds of miles of the most dangerous terrain known to man. Facing tortuous weather, dwindling food supplies, and that gnawing sense of defeat, Scott writes that "all is lost." Yet history has decided otherwise, for Scott is today far more famous than Amundsen: his triumph secured by the story he lived through and told so eloquently to the world.

Edited and narrated by Steve Gough, this Voices of Today audiobook also features an impressionistic sound design bringing the terrifying landscape of the Antarctic alive to the listener, alongside Scott's sad story. Scott's Last Expedition also includes E.L. Atkinson's 1913 account of the finding of Scott's body in the snow, read by Ken Bradley; and music specially composed by Nadine Reddy.

Scott in his own words

Loved this book. I’ve always been interested in the golden age of exploration and this book took me right into the snow and ice. Scott is so optimistic throughout and he really does detail everything during the Terra Nova voyage right up till his death. His thoughts on his men and the animals give you a real insight who Scott really was. Such a compelling tale with brave men and discoveries but also mistakes made.

The narration and sound effects just added to the experience.