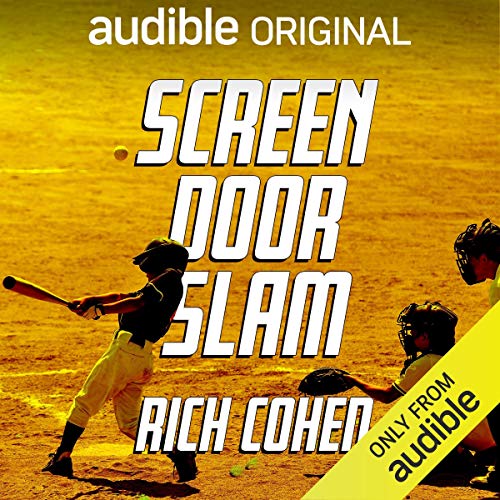 What’s the best way to spend a summer evening?

For many of us, it’s playing softball with friends, under the lights, a cooler of beer in the dugout. In the late 1980s, author Rich Cohen, then a senior in high school, assembled a team of ne’er-do-wells - gear heads, burnouts, goof balls, and the possibly gifted - to compete in what Cohen considered the best 12-Inch softball league in the Lower 48. Think Field of Dreams, but, instead of a cornfield in Iowa, these games were played behind a grade school in Glencoe, Illinois, on Chicago’s North Shore.

Cohen named the team The North Shore Screen Doors, hence the fight song, “Screen Door Slam”, inspired by 1985’s "Super Bowl Shuffle". (“We ain’t out there just to get a tan / we’re out there doing the Screen Door Slam.”) The Screen Doors played just two seasons. The first was glory, but the second, by which time the kids had begun to grow apart, was an error-filled mess, which is why, in late July, Cohen called on his father, famed negotiator Herb Cohen (“Herbie”) to fix the team. A titanic struggle followed, as Herbie, using all his grown-up shrewdness, negotiating prowess, and sports knowledge, wrested control and remade the team in time for a pennant run. Along the way, several timeless questions come up: What’s more important, fun or winning? Family or friends? Speed or power?

This is a story of perfect seasons, friends, games that only seem important, and how a long summer night ends in the cool dawn of adulthood. In it, Cohen has attempted to create a new genre of sports journalism (“Cosmic Little League”) and also add to his greater project of doing for Chicago’s North Shore what Faulkner did for Yoknapatawpha County and Springsteen did for Asbury Park. It’s got softball, fields where the dirt blows, heroes and villains, trickery and negotiation, fathers and sons, and characters, each of whom could anchor his own John Hughes movie. This is The Bad News Bears had those punks reconvened for one more run at the title.

Rich Cohen beautifully tells a baseball story
that is a metaphor of life. It is fun listening about fascinating characters.
Highly recommended.

What a Fabulous Writer

If you ever played sandlot baseball/softball as a kid, this book will take you right back there to all those memories, flubbed plays and glorious wins. His words create such great pictures. Loved it.

I just don't have any thing to say about this story. so it's difficult for me to review it.

I thought this would be a wonderful story of a game that I love. It really started out that way. Then unexpectedly it started dropping F-bombs. Why ruin a good story that I could share with my younger family with that?

Possibly cathartic for the author

This was a well-written excerpt of life over a couple summers for a suburban young adult with daddy issues. I think it only appeals to those directly involved in the story because there is seemingly nothing learned nor resolved from the tale, a d the ending is quite abrupt.
Because the author is skilled, I would have liked to have heard a follow-up to the final event and if he gained any wisdom from it.

The days of summer

Having played a ton of Chicago 16" softball about a generation before Rich Cohen, and knowing the territory where he played, I really enjoyed this story. A different sort of coming of age book, with some great insights into life and what happens to our dreams when egos (Cohen's, his father's, and several other players) get in the way.

Not a baseball story

I’m not a baseball fan, but this is not just a baseball story. It’s a story of youth, friendship, lessons learned & parental wisdom. I enjoyed it.

Very nice story. Thank you for telling us about the North Shore Beer League. Should have listened to the Old Man... 😉

Nostalgia from the 80’s

As a Glencoe resident I was glad to come across this book. As such, I’m a bit biased especially having been a baseball fan in the 80s. Really enjoyable listen, the memories for the author haven’t lost their meaning or sentiment.

Feels over written to me. Then ends unfinished. A lot of bluster and not a lot of substance.