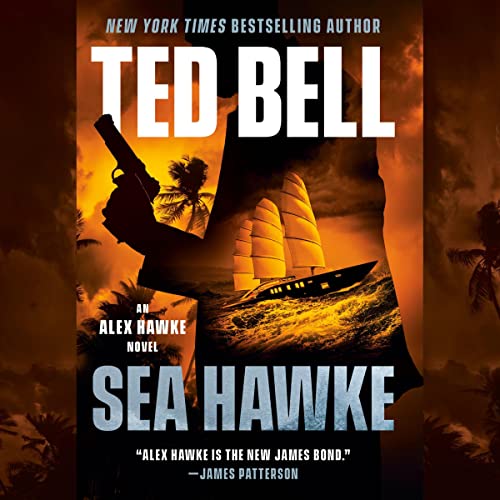 Alex Hawke is sailing into trouble when an around-the-world journey becomes a fight against terror in the latest exciting adventure from New York Times best-selling novelist Ted Bell.

After saving the kidnapped heir to the British throne, gentleman spy and MI6 legend Alex Hawke is due for some downtime. He’s got a new custom built sailing yacht and a goal: to get closer to his son Alexi during an epic cruise across the seven seas.

But fate and the chief of MI6, Lord David Trulove, have other plans.

There’s an unholy alliance of nations who are plotting to attack Western democracies. The wily intelligence leader plans to use Hawke to drive a knife into the heart of this conspiracy. From an island base off Cuba to a secret jungle lair deep in the Amazon, on the land and the seas, the master spy and his crew of incorrigibles are in for the fight of their lives - the fight for freedom.

What listeners say about Sea Hawke

Beginning to lose me

I'm afraid Mr.Bell has run out of ideas...Last 2 stories were weak. Disappointed. Sorry.Narration was great as usual for Mr.Shea.He is the only reason I was able to complete this one.Wished he would have done the last one and I might have been able to finish it.

Great to have John Shea back

The last few months I’ve gone through the entire Alex Hawke series in order. This new book was great, building on the history. Individually the books are great, but everything has so much more depth now. And this one doesn’t disappoint. I’m looking forward to seeing where Hawke goes next and Alexi growing up through this storyline.

The narrator in the previous book did a great job, but it was great having John Shea back as the voice for this entire series.

Ridiculous, even for a thriller

Way beyond plausible, Ted! C'mon. And the fascination with this kid has gotten into way too much of the books. Get back to Congrieve and Stoke being integral to the plots. They feel incidental here. The last volume had an inferior reader. I gave it a pass - publisher's decision. This time, John is back, and that's good! But the plot and execution are poor. Strike two. Giving the series one more shot, then giving up.

Tried to return this book because it promotes conspiracy that China released COVID on the world as a weapon. While I understand it's only a fictional story, I can't support an author who promotes this sort of thing. It will be my last Ted Bell purchase.

Alex Hawke does it again

Ted Bell has again captured the total essence of his story. His hero Alex Hawke remains the man we have all loved since the first book. Always von top of the situation. Bell captures today's headlines and for sees the future, writing a story so on point of today's political atmosphere. Well written and beautifully read.

I have listened to most of the Alex Hawke novels, and while not classics, they were nonetheless entertaining. This one was bad. I have a strong feeling that there was a contracted date to finish this book and this garbage was produced. Lots of small continuity issues, lacks details in the battle scenes, very choppy. The easiest error to remember was in the epilogue, stated Alexi was 7, left his mother at 3 years of age. Within 2 minutes, they say it has been a decade. Which is it, 4 years and or 10.

It is a pitty that Ted choose to coauthor this book with a ten year old! Really " bare chested and bare footed swordplay"

I've never written a review about a book cuz most books I've listened to on here have been adequate. this book had multiple inconsistencies throughout the story. The fight scenes and battles were intellectually, dishonest and far-fetched. not what I'm used to from Ted Bell. there were story threads that were not followed up upon. there is battles in this book early on that seemed to have been completely forgotten by the very end. The enemies were given no credit for anything and acted as completely moronic in their actions. I am highly disappointed and I am not sure if I will purchase the next book by Ted Bell or at least may give him one more chance, but if it's as poorly written as this book, I will cease listening to all Ted Bell books in the future.

To much pompous Hawke

Really sad how Stokely n Brock were relegated to such small roles. Glad Mr. Shea is back. A bit cartoonish with green ray gun.

I’ve read/listened to all of the Alex Hawke novels, I f this had been earlier in the series I wouldn’t have.

Forced and not believable.