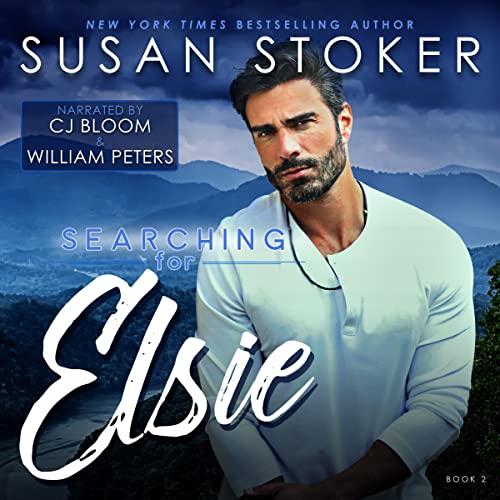 Once upon a time, Elsie Ireland thought she’d found the man of her dreams, only to learn her fairy-tale romance was just another cautionary tale. Beyond a perfect family image, her husband had little interest in Elsie and even less in their son. Years later, she and nine-year-old Tony have landed in Fallport, Virginia. She’s working two jobs and living in a motel, but Tony has a roof over his head and plenty of love. For Elsie, however, love isn’t in the cards. She doesn’t have the time to spare...or the trust.

After serving his country as a Green Beret, Zeke Calhoun was happy to get out of the military and settle into the small-town life as a bar owner. His position with Eagle Point Search and Rescue fulfills his need to serve and provides some of the best friends he’s ever known. He didn’t realize anything was missing, until it was right under his nose every day - his sweet, shy waitress, Elsie.

It isn’t easy to convince the independent, gun-shy single mom to let him in - and with memories of his own disastrous marriage still plaguing him, Zeke isn’t fully certain he’s the best bet for a healthy relationship.

But one stolen kiss in a heightened moment and he’s a goner. Vowing that Elsie and Tony’s lives are about to change for the better, Zeke is up for the challenge of proving that not all men are like her ex.... A task made significantly more difficult when a complication throws the couple’s fledgling relationship off course - then quickly spirals into a life-or-death situation no one saw coming.

Searching for Elsie is the second book in the Eagle Point Search and Rescue series. Each book is a stand-alone, with no cliff-hanger endings.

What listeners say about Searching for Elsie

I am really enjoying this series.

I am a huge fan of Susan Stoker and this book is no exception. Zeke and Elsie both have failed marriages in there past and are very wary of getting into a new relationship. Elsie especially because she has Tony, her nine-year-old son. Watching these two lonely people lower their defenses and learn to trust while still overcoming the past is heartwarming. However seeing Tony and Zeke bond and figure out their relationship is sweet. All of the action in this book is at the end so hang on. My only complaint is that even after two books I don’t really know the team very well. I feel like I know some of the town’s people better. But I will definitely continue with this series. Both narrators did a wonderful job as well.

Enjoyable and still full of twists.

As always Susan Stoker‘s story is engaging and full of excitement. Overall Eagle point is much more laid-back than any of her other series, but this is a very small town so when anything out of the ordinary happens it’s an adventure. Great twist at nearly 3/4 of the way through the story. Fantastic narration and I can’t wait to hear more from these narrators in upcoming books. Elsie‘s ex-husband is a quintessential bad guy. I wish there was a little less repeating of some of the emotional dialogs but overall a very good story and different from
previous ones to date.

So much charm and sweetness

Okay in this one we are moving along in the story. I felt it was pretty basic romance (wonderful characters and lovely romance) but then out of nowhere…BAM! I had all these strong feelings rise up in me! I was like..WAIT…what did I just HEAR?! *rewind and relisten*. I could not believe what I just heard! I was literally shocked and angered at the same time. NO, I am not going to say what it is but WOW does it pack a punch!

So the storyline is surprising and shocking. The characters are kind and man did this bring out my love for Zeke! This is the guy every woman who has a child wants! He is kind, protective, ruggedly handsome, self sufficient and caring. These qualities made me love him. He really overshadows Elsie (don’t get me wrong she is great but Zeke pulls ahead). Him getting her a caramel macchiato all the time…so sweet!

I did listen to this on audio. CJ Bloom and William Peters do an amazing job portraying these characters. I am giving a shout out to Mr Peters as he sounded perfectly as I expected of Zeke.

The Suspense Took A While

The narration was pretty good. I was happy that both male and female narrators were reading Zeke and Elsie's story.

I admit that I was surprised regarding the suspense portion of the story. While I enjoyed listening as Elsie and Zeke's romance blossomed, I kept waiting for the suspense portion to occur. I had a vague idea of what may happen, and knew who the bad guy was going to end up being, but I expected to get a buildup long before it actually happened.

I also like Tony's relationship, not only with Zeke, but with the rest of the Eagle Point Search and Rescue team.

The actual suspense part was very suspenseful, but very short-lived. One thing I also liked about Zeke and Elsie's story was that there wasn't a ton of angst in their relationship, even after they had both been previously burned.

I am looking forward to book 3 in the Eagle Point Search and Rescue series.

I loved the story and the narration made it even better! Both narrators did a great job making the characters come to life.

This book completely lacked a storyline besides being a romance. I did not enjoy this book at all. It lacked any kind of depth and was like reading a basic everyday romance. It was boring.

This second book in the Rescue Series was great! Much faster moving than the first book and I absolutely love stories with kids in the story, too. And the sex was awesome. Just a wonderful story. Can’t wait to read the next one

A little different from her usual

I really liked this story. So many of Susan's stories have active duty leads where in this series she is exploring the toll of serving our country, years after. Divorce, PTSD, homelessness, and suicide are huge issues for our retired servicemen. Heck, even getting the proper medical care through the Veteran's Administration is a nightmare. I love Zeke. I love Elsie and her son. The characters are well fleshed out, relatable, and you empathize with them. Yeah, if you meet the woman of your dreams at 35, she probably isn't a pure, white virgin. I also appreciate that this book deals with the issues without being preachy, I quit reading another of her series because I started feeling like I was being preached to. Even though I probably agree with nearly 100% of her politics, it takes away from the storytelling and becomes an infomercial. This series, so far, doesn't do this. I love the small town vibe. The three old men who play chess outside a shop make me laugh and I look forward to seeing them show up in the books. I really like the female reader, even when she is doing the male voices. The male reader is fine too, but I just like the female reader better. Overall, she got me hooked. I am fixing to pre-order the next one that comes out in November. After reading this one, I bought the first one and just finished that one too. Also good.

I rarely write a full review. But this book is an exception. The storyline is good the twist is unexpected and the narration is wonderful this is definitely worth a credit!

I loved the dual narration of CJ Bloom and William Peters

Both Zeke and Elsie have given up on ever having a relationship again. Elsie' ex believed in the belittling her . After five years of no contact from her ex, he shows up and suddenly wants her back and a relationship with their son Tony. Will Elsie and Zeke's relationship survive and they come out on the other side stronger together or will it tear them apart?

she's at it again

I'm just in awe of this woman. I've been on some awesome rides through all her series and each series and story is unique in every way...especially her heroines.
the eagle point series still has the alpha element but nowhere the military capabilities susan has written in previous books.
so this is series seems to be aiming for a little angst and suspense but more of the characters finding themselves and eachother...there is ptsd involved, tough childhoods, tortured souls, broken hearts and lots of feel good warmth.
kids, friends and eventually a good life seems to be the theme running throughout this series and all done, of course, with Susan Stoker aplomb!
her fluent plotline is always well paced and she gives us steamy scenes in conjunction with respect and admiration. it's a wonderful type of role model writing that In my opinion, is such a positive way to send a message into the world .
thanks again susan, it's nice semi non stressful series to enjoy.
I've never listened to William Peter's before but he has a nice tone and narrates well. As for CJ Bloom, what can I say, brilliant as always.