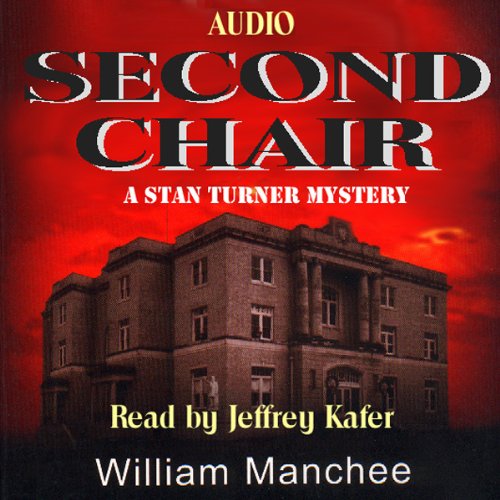 Stan is asked to defend a college student accused of killing her baby. It's a pretty hopeless case, as she has no memory of what happened. Stan knows he shouldn't even be taking the case, since he's only been in practice for a year and has never handled a murder trial. But the client's father insists, claiming "God" has sent him to Stan. Stan reluctantly agrees to take the case on the condition that his law professor assist him as "second chair" - not realizing his professor is a drunk and probably won't show up for trial.

"Appealing characters, especially in the courtroom, make this an easy entertaining read." (Publishers Weekly)
"The courtroom scenes are superb, intoxicating, the discriptions filled with power ... the novel shows Manchee as a smooth, polished master of the mystery form." (The Book Reader)

Stan Turner has never handled a murder trial, but when the father of a college girl accused of killing her baby insist he represent her, he reluctantly agrees assuming he can enlist his law professor to help out. His law professor, who is known as "Snake," turns out to be more trouble than he's worth and Stan ends up pretty much on his own. While Stan struggles to find out who actually killed Sarah's baby he is distracted by a wrongful death suit, a religious fanatic known as Doomsayer and an overzealous media. I loved the non-stop action, ingenious plot twists, and the shocking but delightful ending. And, of course, Jeffrey Kafer's reading was smooth and professonal as always.

One must be successful regarding three major elements to produce a worthy audio book. An interesting story well plotted, stylish prose with adept dialogue and a skilled reader. This book does fine with the story line. It is clever and complex enough to keep one awake.
But that is where this book ends its search for entertainment and credibility. The prose is stilted, unrealistic, as flat as the great American plain and it appears to be written by a twelve year-old. The dialogue is insipid, a(as in "un")lyrical, and as unrealistic and palatable as the creationist's trump card. Then the "reader" (sic). Mono-toned, inflections and emphasis in all the wrong places and I was certain he had not seen the book prior to recording day. In his defense, the text was about as lyrical as a bag pipe in the hands of a novice. So, other than being prosaic and platitudinous, it did not have much going for it.
Thank God (sic) it was not laced with proselytizing and sub-currents of religious blather ;-)