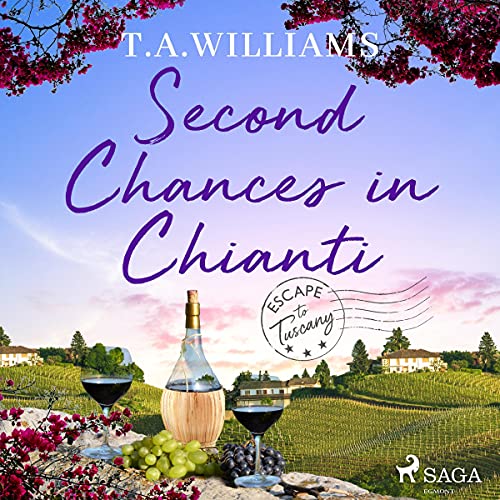 Alice thought her future was set in stone until her past came knocking...

Alice Butler starred in a successful US sitcom until tensions in the cast and crew caused the show to be cancelled. Now, five years later and working towards her dream job in art history, she’s called back for a revival of the show. It can only end in disaster, surely?

Flown to a villa in Chianti to meet with the rest of the cast, Alice must decide where her future lies - with her boyfriend, David, who laps up the Hollywood company, or with the mysterious Matt, who shies away from public attention?

A beautiful romance set against the stunning backdrop of Tuscany, perfect for fans of Sophie Cousens, Ruth Kelly and Lorraine Wilson.

T.A. Williams lives in Devon with his Italian wife. He was born in England of a Scottish mother and Welsh father. After a degree in modern languages at Nottingham University, he lived and worked in Switzerland, France and Italy, before returning to the UK. He’s taught Arab princes, Brazilian beauty queens and Italian billionaires. He speaks several languages and has travelled extensively. He has eaten snake, still-alive fish, and alligator. A Spanish dog, a Russian bug and a Korean parasite have done their best to eat him in return. His hobby is long-distance cycling, but his passion is writing.

The characters in the story really make it exceptional... Natalie is a brilliant protagonist... and I absolutely adored her journey to self-discovery to find her new identity.
-- BooksandBookends

Wow! This is contemporary romance at its best! The writing is exquisite. ... And the plot is brilliantly clever, captivating, and delightful with a little bit of drama, love, loss, and of course romance.
-- WhatsBetterThanBooks

The characters are all brilliantly written, the storyline flows extremely well throughout, and I loved every bit of it.
-- Fiona Wilson (#10 Goodreads reviewer UK)

T. A. Williams has that gorgeous way of writing a feel good story...he’s absolutely backed up that men can write chick-lit.
-- Reviewed The Book (Top 1000 Amazon Reviewer)

What listeners say about Second Chances in Chianti