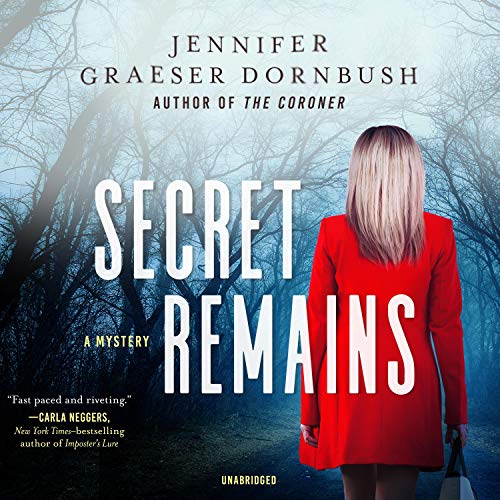 A cold-case murder, a grisly discovery, and a viper’s nest of resentment, betrayal, and dirty secrets converge in this mystery perfect for fans of Kathy Reichs and Jayne Ann Krentz.

It’s been 12 years since Sandi Parkman went missing after being dropped off at home by her schoolmate, Nick Larson, now the Sheriff of Freeport, Michigan. When a construction crew unearths Sandi’s bones - along with Nick’s letterman jacket and one of his hairs - Nick becomes suspect number one in the murder.

Dr. Emily Hartford, the daughter of Freeport’s medical examiner, is called in to investigate, but the case is about to get personal. Nick was Emily’s high school love, and now she has to either clear his name - or contend that he’s the killer. As she delves into the case, a host of other suspects emerge: a coterie of Nick’s jock friends from high school; Sandi’s sister, Tiffani, now a dancer at a local strip club; and James VanDerMuellen, a trust funder who recently returned to Freeport.

As the autumn skies darken over Freeport and the holiday season looms, Emily must sift through more than Sandi’s brittle bones to solve the case. Can she exonerate Nick - and rekindle their long-smoldering romance? The race is on to find the truth.

What listeners say about Secret Remains

With the background of Dr Emily Hartford: knowledge of her father's cases and how he handled them, her intelligence as evidenced by scholarships and recognition of talent, her years of medical training plus longstanding relationship with a former FBI agent, the author has her making many amazingly ridiculous choices. As an avid fan of detective, police and attorney books I found the situations and events poorly researched. I really dislike seeing an intelligent female character put into situations that seem outside her character just to add some new, undeveloped material to a book. To me, this took much away from a potentially good story base.

I listened to the first book and the main character got on my nerves a little bit but by the second book I was hoping she got killed off. Most selfish, self centered and dumbest know it all ever. The ending felt like it was an opening to a third book however I will not be reading it to find out what stupid situations she gets herself into that makes her man of the moment look like a bumbling idiot.

This needed an editor

There were some inconsistencies in the story. Also several times that I thought “this doesn’t make sense!”

Although I had a few issues with the first book, I wanted to give the author another chance. Disappointed.

Enjoyed this series of 2 books, and it ends in a way that others may follow. Interesting enough to keep me listening, but I do dislike authors that make women sound stupid in their actions, rather than finding themselves in a situation because of curiosity or by way of being in the wrong place at the wrong time. I think the intention is to convey a head strong, courageous will, but it isn't how I read it. Overall, I enjoyed the story, though I find myself grating my teeth when the female character has no well thought out plan prior to finding herself in a dangerous situation.

The narrator does a good job, but her voice does not seem to portray a grown woman in the medical field. Sounds very young.

hoping for a 3rd book

Not nearly as good as the first.

story was ok, but she should have been arrested of interfering in a Police investigation. and did Nissan sponsor the book? it wasn't 'I ran to my car", it was "I ran to my Nissan Leaf"...EVERY TIME! who does that? struggled to finish it

so glad I found this series.

this series is great and so is the narrator. I would suggest it to anyone

I really like the character development over the course of these 2 books. I am excited for the author to write more in this series.

I loved the 1st book very much. This one which follows on, I found myself being frustrated with Emily due to her indecisiveness then realised that she was only like that when it came to her own life choices. Still annoying but a good story if you have to give yourself a talking to about being more understanding...🤔

I'm wordless... I thought I knew the end. How wrong I was!!! I hope other books of Emily come to light and she heads back to town as the coroner. Fairly within her own right.

Brilliant story, keeps you gripped from beginning to end. Can't wait for the next books in the series. This would make a great TV drama.

A need to keep reading

Really enjoyed this story, after reading the first book in the series. Would definitely recommend

Read the first coroner and thoroughly enjoyed it but was disappointed as thought left lots of unanswered questions regarding her life. This actually is another great case and also is a continuation of her life story. On to the next one!!

Wow second book was brilliant too, loved all the forensic work I knew that Nick was innocent but I did end up doubting it a couple of times, engaging enthralling, can't wait to see if there is a third book coming, narration added to the storyline

Brilliant sequel to the Coroner, great story well read, hoping there is a next one in the pipeline

Really enjoyed the story and the narration. Kept me guessing till the very end.

I really enjoyed this book. Just right. Not too gory. The characters are believable. Nice

Enjoyed the book as it was easy to listen to, I recommend it as the storyline was good but the coroner got on my nerves a bit, she came across as a bit of a know it all but it was worth a listen.

Great story.
I was a little disappointed by the ending, but after looking up the author and seeing that more books are on the horizon for the series, I’m looking forward to where the story and characters will go.

The narrators voice is excellent and the story is strong. I Recommend this and the first book in this series.

excellent...hope there will be more