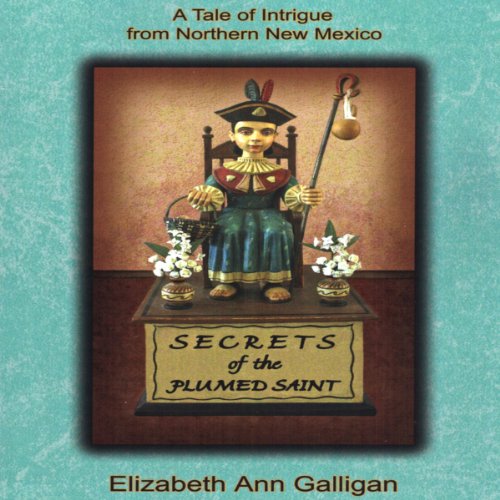 "I've never held a saint before," Ernie said as he cradled the 100-year-old carving of the Santo Nino de Atocha, the Holy Child. When the long-cherished statue of the Santo Nino de Atocha disappears, village leaders decide to keep the news from the Church hierarchy for fear of reprisal. They suspect the culprits are among local hippies, Protestants, drug dealers, Anglos, and other outsiders. But when the statue mysteriously reappears and their beloved chapel sacristan is attacked, favorite son Jay Sierra and his pal, Ernie Lucero, team up to investigate. Long-forgotten facts about the little statue take everyone by surprise and lead to the cozy conclusion of this delightful crime mystery set in an elbow of time during the 1970s, in a high mountain valley in northern New Mexico. This audiobook is filled with music, sound effects, and the northern New Mexico dialect referred to by linguists as the Rio Arriba dialect. Code-mixing of Spanish and English terms is characteristic of the area.

What listeners say about Secrets of the Plumed Saint

I love all stories of the Santos

I am from northern New Mexico. And my grandfather was a penitenti and I used to take care of all the Santos in the Moratha .It was a wonderful story and brought me back such wonderful loving memories of our history.

I enjoyed this from beginning to end! As one who lives in Arizona and spent a lot of time in New Mexico and California, I can say the author captured the real feel of the Southwest and it's Hispanic people! I am bilingual myself and love the sprinkle of Spanish in the story, which added to the feeling of being there. Loved this !

Superb story/sound set in the Land of Enchantment!

It is not that kind of mystery. It is authentic to the time period (60s) and culture of New Mexico. A very heartwarming story. You feel like you really know and love the inhabitants of the village of Villa Vieja. I hope the author writes another follow up story using the same characters!

Have you listened to any of Brian Amador’s other performances before? How does this one compare?

No. But he is excellent interpreting all the various characters and dialects of the region. A very good story teller.

There was just the right amount of music and sound effects to add to the overall feel of the culture of the village. It was never distracting.

Not what I had expected...

This book would be perfect for an old maiden aunt, or perhaps a Sunday School class to listen to. I intend no disrespect by saying that it is indeed a very sweet, uplifting story, even with interesting New Mexico native culture. But this (pretty obviously religious book) just didn't hold my attention.

It is very simply written. It involves the loss of a saint's statue from a small church, and what that means to all the people. It is narrated in a simple fashion with sound effects (which may or may not be useful--I couldn't decide). I guess I had been thinking that the plot/narration could have been more energetic. I feel a bit guilty not giving it more stars, because it might be just the perfect book for some people, and it is nice to hear something that has an inspirational bent. All of the qualities of goodness, inspiration, kindness, etc, are things that are wonderful to encounter in a book. But this one just didn't have the "spark" I was looking for. It could have been quite good, but somehow just felt flat.