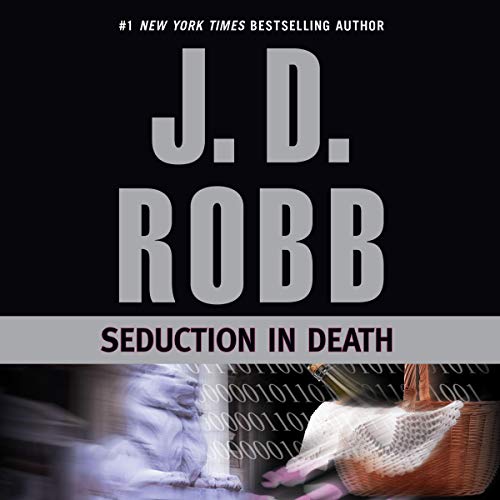 Dante had been courting his victim in cyberspace for weeks before meeting her in person. A few sips of wine and a few hours later, she was dead. The murder weapon: a rare, usually undetectable date-rape drug with a street value of a quarter million dollars. Detective Eve Dallas is playing and replaying the clues in her mind. The candlelight, the music, the rose petals strewn across the bed - a seduction meant for his benefit, not hers. He hadn't intended to kill her. But now that he has, he is left with only two choices: to either hole up in fear and guilt or start hunting again....

What listeners say about Seduction in Death

Thank you! Thank you! Thank you! When I first saw "Seduction In Death" new release date I thought it was just the same book with a new republication date... but it's not. I am passionate about the "In Death" series and am constantly blown away by J. D. Robbs /Nora Roberts genius. I think Susan Ericksen is brilliant but I have been perplexed for sometime as to why the "Powers That Be" dictated changes in the character depiction of my beloved characters in books 13-16. I didn't dare to even dream that I would ever get to hear my favorite character in these books as I have grown to love them but IT HAPPENED and I'M IN HEAVEN! All the character depiction in the Redo of Seduction In Death are back...to name a few, Peabody, Rourke, Eve, Morris, Commander Whitney etc... In the first rendition of Seduction In Death some of the characters went through major transformation, some more subtle in the Re-do they are all back, in the characters we have grown to love and expect, as they have been depicting in all the books with the exclusion of the character diversions in books 13-16. The Red-do of "Seduction In Death" in my opinion, is as it should have been the first time out. If this is your first "A-read" of Seduction in death you have a treat in store, if this is the first Re-do "A-read" of Seduction in Death you have a treat and surprise in store! Can't wait to A-read the next Re-do's. This one is a definite Winner! Major Kudu's to Ms. Ericksen!

I'm delighted that Susan Ericksen has re-recorded some of the first In Death books she originally performed several years ago. I think this was one of her firsts, and she had not yet developed all the distinct character voices that ID fans recognize today.I just finished listening to the new recording and it has really enhanced my enjoyment of this book. J.D. Robb and Susan Ericksen are a can't-be-beat combination!

The In Death Series is one of my absolute favorites, and this book is a good change of pace from the more serial-killer-oriented ones that always leave me a little uneasy. Plus, the final solidifcation of Peabody and McNab's relationship is just great. And in the narrator, who in my opinion was born for this exact series, and you have a great ride.

The character's voices are different...

The story was good, but the reader changed the way she voiced the characters in this story. They are all different and almost spoken in a dragging way. It was very distracting and took away from the enjoyment of this particular book.

I have been listening to all the books in order. This performance seemed somewhat sluggish. Story still great

Would you consider the audio edition of Seduction in Death to be better than the print version?

I heard that a couple of the books were re-recorded but I thought that they could not be that bad - so no I would not go back and get the re-recorded versions. I have the entire collection and have listened to them for years but I never noticed that the old version did not have the right voices. I was listening to the old version tonight and not even one chapter in I had to stop because it was driving me crazy. Then I found the re-recorded version. It is all better now. :-) All the right voices are there.

Keep up the great work Susan Ericksen! If you ever stop reading Eve Dallas I will just have to cry.

What did you love best about Seduction in Death?

The story line(s) including the subplots about the secondary characters. The mystery itself was well done. I enjoyed seeing a slightly different view of the "boss":Whitney. And as usual, I love Peabody.

Usually it's Eve, but in this one I liked Peabody better. It showed more sides of her character, and although she's a good cop, she's also a woman in the fullest sense and is growing and maturing. And she's able to put up with Eve's extremely bad temper throughout this particular book.

Again, I liked all the minor characters: Trina is a trip, even Somerset showed more than one face. Peabody and McNabb are getting their balance and Charles and his new love interest were well written and performed. But for some reason in this story,or maybe just the way it was performed, Eve seemed to have one mood and one mood only: Angry, aggressive, bordering on mean in her relationships with everyone. She never let down her nasty voice and angry response and by the big rant in Whitney's office I was really tired of it. I get that she's under a lot of pressure (some of it self imposed) and I get that she has flash backs to her terrible childhood. This is usually a good plot enhancer.But her softer side was totally missing in this one. If this was the first and only book I'd read of this series, I'd have to wonder why is was so popular. I was glad that she was taking a vacation at the end of the book. If not, someone would have killed her and ended the series!

I bought this because I read that it was re-released to correct the "sound" of the characters and bring them in line with the rest of the series. Maybe a little bit of Eve got lost in the translation. I want Eve back!

I can NEVER get too much of the IN DEATH series. J. D. Robb (Nora Roberts) and her narrator Susan Ericksen have made this story truly come a!ive.

Another great addition to the series! The narrator did a great job again with characters and bringing the story alive. And I was happy that there wasn’t a preview at the end of this book!

I never tire of hearing about Eve! Love the work life as well as personal life!

Where does Seduction in Death rank among all the audiobooks you’ve listened to so far?

THE WHOLE SERIES IS GREAT

What other book might you compare Seduction in Death to, and why?

ANY OF THE IN DEATH BOOKS

Have you listened to any of Susan Ericksen’s other performances? How does this one compare?

THE WHOLE IN DEATH SERIES ARE A GREAT READ

I love J. D. Robb's Death in series. I have read so many of her books. This is the first one I have listen to as an audio book and did not enjoy the experience, in fact I have given up on listening. I found the narrator so hard and abrasive.
I had never thought of Eve and Peabody as being such angry characters but the narrator turned them into these two screaming angry people. I found that I could not bear to have such angry voices in my head.
Will go back to reading the books or concentrated on Nora Roberts (the other name under which R J Robb writes) audio books instead. Love those.

I have loved every book. This one was no exception. Cannot wait to listen to the next one. Jenny

Would you listen to Seduction in Death again? Why?

Possibly not. Sometimes in this series Susan Eriksons performance is a little slower making all the voices slightly different. This is one of the times. I still enjoyed the book though.

i always listen to the books quickly but 12 hours in one sitting might be a bit much.

This was an interesting concept with Lucious and Kevin. Not your average killers. Very interesting.

love J.D Robb's in death series and this one, as usual failed to disappoint. Good narration

Great book. Love characters, storyline and the narration is spot on. On to the next in the series.

Fast pace, funny and witty in her normal publication. However, not as gripping as other books she written.