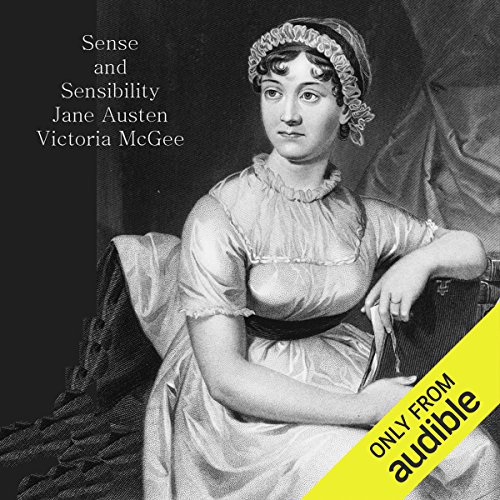 This is Austen's first published novel, from 1851, which she wrote under the pseudonym "A Lady". The story is about Elinor and Marianne, two daughters of Mr. Dashwood by his second wife. They have a younger sister, Margaret, and an older half-brother named John. When their father dies, the family estate passes to John, and the Dashwood women are left in reduced circumstances.

The novel follows the Dashwood sisters to their new home, a cottage on a distant relative's property, where they experience both romance and heartbreak. The contrast between the sister's characters is eventually resolved as they each find love and lasting happiness. Through the events in the novel, Elinor and Marianne encounter the sense and sensibility of life and love.

What listeners say about Sense and Sensibility

I'm glad it was free of charge

Terrible narration and several parts were missing. I had to get the kindle book as well to get the whole story.

To hear words, holidays, even names repeatedly mispronounced is an unhappy distraction from such a wonderful and beloved story.

A classic it may be, but wow, save it for bedtime.

I would not recommend this book to anyone.

Unedited and missing part of a chapter

There were several unedited parts and it was even missing the last page of one of the chapters. Still a great story but very disappointed in the audio.

Would you try another book from Jane Austen and/or Victoria McGee?

Jane Austen, yes; Victoria McGee, absolutely not. I'm sure she's a wonderful person but this narration is painful.

Has Sense and Sensibility turned you off from other books in this genre?

I did not get a chance to get through the first chapter. I do plan to try another Jane Austen novel.

If you could play editor, what scene or scenes would you have cut from Sense and Sensibility?

Didn't get through first chapter so I cannot answer that.

I have hundreds of books from audible. I don't recall ever leaving a review. I've had horrible narrators and amazing narrators, but none that made me passionate enough to leave a review. THIS version of Sense & Sensibility was awful. Actually sounded like a robot. After 200 audiobooks I have learned my lesson. ALWAYS listen to a sample prior to purchase. I apologize for the low rating on the story, I'm sure it's amazing - it is a classic after all. But the narrator ruined the whole experience.

The worst narrator so far

What disappointed you about Sense and Sensibility?

I wish I had read the previous reviewer's comments before purchasing. This is hands down the worse book I've gotten on Audible so far. The narrator is terrible! I'm a few hours in, and I'm not even going to finish it. I'm ordering the same book with a different narrator. This narrator sounds robotic, bored, and tired. She sounds like an alien attempting to fit in with earthlings by tackling classic lit. It's truly terrible. There are gaps between some sentences and at the end of each chapter that yawn for so long that I routinely check to make sure the Audible AP on my phone didn't close without warning. There is very little distinction in her tone between characters, if any, and often the same character speaks with a different tone within the same paragraph. It's very confusing--and I've read the book several times on my own, so it's not the subject matter that's causing my issues. Trust me, the under $3 price tag does not make this more tolerable.

With this narration, nothing at all!

Would you be willing to try another one of Victoria McGee’s performances?

This book was slow and quietly done. I generally like that but it stayed that way to the end. It's just almost boring. The narrator is the worst. She almost sounds like a computer. It ruined the book for me.

The narrators voice sounds computerized and is distracting and the story is just okay. I would recommend Pride & Prejudice before this because it is so much better

I never thought I'd find myself listening or reading a Jane Austen book, much less reviewing one. On the insistence of my dance teacher and my grandma however I found myself purchasing it. I always thought that Jane Austen would be very boring. I was wrong. This book was very lovely, and interesting. Unfortunately the narration is a little faulty and repeats itself in some places. Also a large section of the book is missing in chapter 43. I had to borrow my grandma's copy of the book and read it, especially since the part of the book missing is rather key to the plot. I recommend the book but perhaps you might want to find a different narration.

Decent, but not Compelling

I've listened to three Austen books now (Sense and Sensibility, Pride and Prejudice, and Northanger Abbey) and this one, to me, was the slowest and least satisfying. Jane Austen's writing is always technically good and pleasing in prose, but her story-telling doesn't seem well developed in this early work. Though the premise is what you'd expect from an Austen novel -- the match-making woes of young ladies -- it doesn't seem to have the same wit as works like P&P.

The narrator does a perfectly fine job, and I don't recall having too much trouble distinguishing between characters. My only complaint -- and this is pure personal preference -- is that she reads a little slow for my tastes. Though that can be good for comprehension, I found that it made the novel hard to stay focused on because it wasn't quite enough to keep my brain occupied. It also makes it much longer, and I had to listen to it in smaller bites to keep from nodding off.

That being said, Austen is always worthwhile, and when I finished it I immediately wanted to move into another Austen novel. Maybe because S&S felt somewhat unsatisfying but still left an impression, I immediately downloaded Northanger Abbey (which is about half the length but I enjoyed far more).

Recommended for fans of Austen's work (there's no reason not to add this to your repertoire) or voracious listeners, but first-time or casual readers would probably fare better with one of her other masterpieces.

this is the only option for buying without a subscription, but the horrible american reader makes me tempted to part with more cash for a more pleasent experience. obviously its a wonderful story by a wonderful ENGLISH author so its a shame this "basics" version had to have an AMERICAN wreck it.

I have listened to this narrator read the 'Little Women' series so I knew her voice and style. While it was perfect for that series there is no attempt to change it for this book. My darling Jane Austen would surely turn in her grave! It's not just the American voice, after all it's not a foregone conclusion that it wouldn't bring something new to the book but I'm afraid this author sounds monotone, drab and dreary. Having struggled through a couple of chapters I've abandoned it for a different version that I've listened to before on CD.

The Story is a classic and the author unequaled in her time but the narrator destroyed all enjoyment of this book. She sounds like a computer generated voice. The saying "you get what you paid for" is entirely appropriate in this instance!

Would you consider the audio edition of Sense and Sensibility to be better than the print version?

It is easier for me to understand the audio edition. Having sight problems is no longer a barrier to enjoying the classics.

What does Victoria McGee bring to the story that you wouldn’t experience if you had only read the book?

Victoria brings life, vitality and feeling to this book.