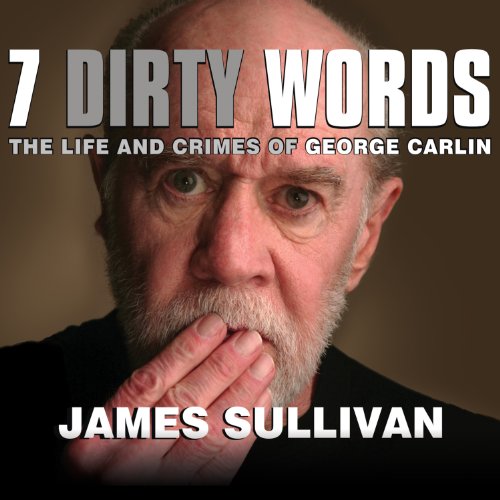 In Seven Dirty Words, journalist and cultural critic James Sullivan tells the story of Alternative America from the 1950s to the present, from the singular vantage point of George Carlin, the Catholic boy for whom nothing was sacred.

A critical biography, Seven Dirty Words is an insightful (and, of course, hilarious) examination of Carlin's body of work as it pertained to the cultural times and the man who created it, from his early days as a more-or-less conventional comedian to his stunning transformation into the subversive comedic voice of the emerging counterculture. Sullivan also chronicles Carlin's struggles with censorship and drugs, as well as the full-blown renaissance he experienced in the 1990s, both personally and professionally, when he became an elder statesman to a younger generation of comics who revered him.

Seven Dirty Words is nothing less than the definitive biography of an American master who changed the world and also a work of cultural commentary that frames George Carlin's extraordinary legacy.

"An excellent account of the life and work of an important and greatly missed artist." ( Booklist)

Carlin's CV with no Depth or Insight

There is nothing wrong with this book, it's just not what I wanted it to be. I love George Carlin and have quoted his bits my whole life (strange thing about hats -- wear one long enough, and it feels like it's not there, take it off ... and it feels like it's still there!). I was hoping to understand how he developed his unique brand of comic observation of modern life. But I discovered nothing remarkable and grew tired of listening to what amounted to a detailed long-form version of his CV.

It would have been fairly straightforward to have written in more of Carlin's actual comic bits, analyzing where in his history they came from. There are some short examples, like how he got his weatherman schtick from Bob and Ray, but not nearly enough, nor was it all that interesting. Again, nothing wrong with any of this, just nothing new for me, a big Carlin fan already familiar with is body of work as a stand-up, writer, and actor.

There is one section about halfway through that redeems the book -- the story of how Carlin developed his most famous act, the Seven Dirty Words of the title, and how that led to a Supreme Court case on First Amendment rights. That's what the entire book should have been like, achieving depth and insight into the analysis of the comedy and the fallout.

But even in that part of the book, I don't believe the author provided any fresh input directly from Carlin himself. Of course, Carlin had passed away by then, but even in quoting existing sources, or quoting Carlin's contemporaries, there is too little -- meanwhile, we get a full description of even the smallest roles in the worst movies he made, even some that were never released!

I've read similar books about other pop culture figures that I admire -- Woody Allen, J.D. Salinger, Harpo Marx, the Beatles, Paul Simon, Tiger Woods, Leonard Cohen, and others. I enjoyed all of those and anticipated a similar experience learning about Carlin's background and career. But this book feels like Carlin's sports reports -- "Here are some scores: 4-1, 3-2, 5-4, and a partial score, Baltimore 3." In other words, incomplete.

This book doesn’t really get into who George was. It’s like listening to a resume being read with a quip thrown in here and there.

Great biography!! Narrator almost sounds like a Carlin character. I've always loved George Carlin, but listening to the book made me appreciate him and miss him so much. I really wish he was around today. Maybe the fact that Carlin is gone is another sign of our world's entropy.

A Great History of a GIANT!

The author took a subject that many people think they knew and shows them that they didn't.

everything admit his life made is think, listen and notice stir we would have never pays any attention to. love the detail and insite.

the narrator was fantastic. the only thing I could wish for would be to have a quick reference set of links to the works of George Carlin so I could enjoy them for myself :)

If you're interested in a showbiz resume, this book gives the bare facts about Carlin's professional life

Has Seven Dirty Words turned you off from other books in this genre?

If a biographer does not have any special access either to the subject of the bio or to people who have inside information, then it's better to study the subject's own works.

I'm a huge fan of Carlin's work, so it was a great disappointment to find that there was so little new information about the man here.

proof listeners should be implemented