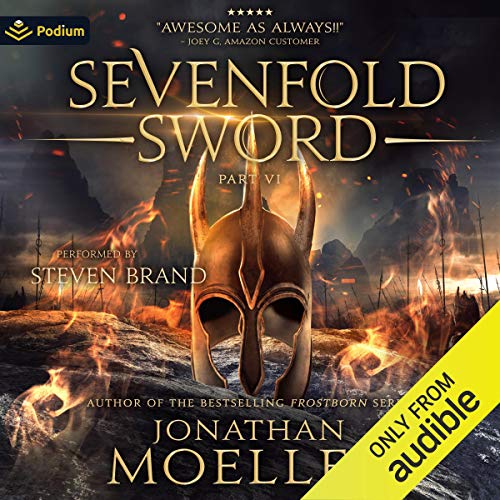 Sevenfold Sword, Part VI includes books 11 and 12 of the series.

The quest of the Seven Swords nears its end, and dark powers rise to seize the world.

The quest of the Seven Swords has been a trap all along. For the dark elven tyrant known as the Sovereign will use the power of the Swords to ascend to godhood and enslave the world for all time. And only Ridmark Arban stands in his way.

love the entire series. The narrator was excellent. The story was complete in every detail.

Great finish to the series

I thoroughly enjoyed the entire series of Sevenfold Sword. The characters really come alive and the trials that each of them have been through was incredibly detailed and so entertaining. I really felt as if I knew characters and as each book was released, I wanted to learn more about them as the story continued. The mixture of different kindred and all their cultures working together to create a truly great story of good and evil. The author is so talented at creating this world of struggle and adversity while staying true to each character's personality, strengths, and vulnerability. Thank you again Mr Moeller for the escape that was much needed and also releasing each book at just the right time. And of course, Steven Brand made the entire series come alive. Great performance as always. I look forwarding to your future pairings together.

And what was the point of GUARDIAN? NOTHING HAPPENED!!! Nothing was gained, nothing was lost, no secrets were revealed, nothing new was added. It was just one long, pointless battle that should have swayed a lot more in the Confessors favor if he'd had more than five braincells. He wasted an entire army by throwing it peacemeal into a single side of a charging army. Had he bothered to coordinate the attacks and tried to flank the hoplites while keeping Hector and the Keeper occupied from the air, he could have crushed them.

I can never recommend anyone to pay full price for any of these books. Stick to cheaper credits, cause they're not worth the money.

the general plot is good, characters have some meat but the ceaseless repetition of who they are and what they've gone through adds about 4 hours to the story. The author seems to have no faith in the readers ability to remember the plight of the characters in the book they've been currently engaged in for the last 12 hours is irritating and not necessary. The god stuff, Christ stuff, and marriage stuff is a bit rich considering the context. I like the characters. That is why I finish these books. Sometimes I grow so weary of the fluff I put the book down for days at I time. In the end I finished.

the story itself is great. the characters or well thoughts out, the world - expansive. action, not many dull moments, however some redundancy where switching character view points. explaining the same thing over and over just from different characters gets boring, for example: explaining what a sword born is three times in a row just from a different character does not add to the story, rather is just seems like page filler.

could of been much more

to much repetitive explanation I would not recommend this it's a long one I'm sure that if you're reading this far you don't need any explanation over and over . battle scenes go on a bit to much as well

Excellent ending to a brilliant story

I have been engrossed in this series and it’s characters for a long time with the added benefit of Steven Brand’s narration, it takes it to another level. The characters are excellent and the villains are equally engrossing and it wants you to know more. The story development is of a very high standard and the ending was superb.

Wow, what a great book series!
It should be a film, but it would probably go on for too long and cost too much money to produce.
Fantastic