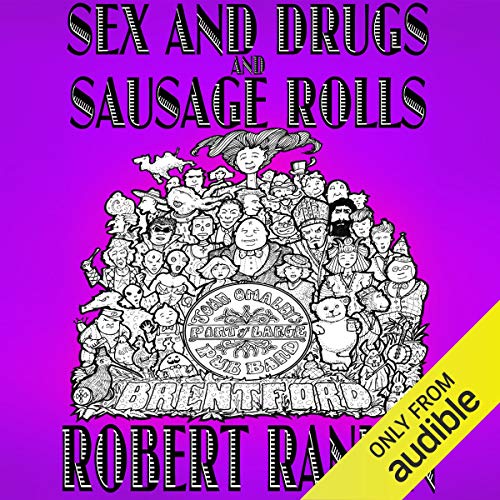 Robert Rankin’s blend of zany humor and fantasy shines through in this performance of his own comic novel Sex and Drugs and Sausage Rolls.

Rankin’s novel stars two slacker "blokes" named Jim Pooley and John Omally, who decide that their path to glory will come from managing a band called Gandhi’s Hairdryer. Along the way, they meet time travelers who create an alternate world in which the Beatles are still together and the Queen has been assassinated. Other gags in this installment of the Brentford Trilogy include a shopkeeper who invents a unicorn and a fortune teller who can divine the future by reading male anatomy.

Rankin is a delightful performer of his own work, inflecting his dialogue with comical characterizations and irreverence.

It has always been John Omally's secret ambition to become a rock star. In his youth he mastered air guitar and wardrobe-mirror posing, but he lacked that certain something. Talent. But at last an opportunity has arisen for John to get into 'The Industry'.

A band called Gandhi's Hairdryer are looking for a manager, so all John has to do is persuade them that he is the new Brian Epstein. It should be a piece of cake. But - and there's always a but - there is something rather odd about this band. Something other-worldly. It might be the lead singer, whose voice has the power to heal. Might she be an angel, perhaps? Or could she be the Devil in disguise? Because, after all, the Devil does have all the best tunes. And this is Brentford.

"Stark raving genius...alarming and deformed brilliance” ( Observer)
“He becomes funnier the more you read him.” ( Independent)
“Everybody should read at least one Robert Rankin in their life.” ( Daily Express)
“One of the rare guys who can always make me laugh” (Terry Pratchett)
“To the top-selling ranks of humorists such as Douglas Adams and Terry Pratchett, let us welcome Mr Rankin” (Tom Hutchinson, The Times)

What listeners say about Sex and Drugs and Sausage Rolls

wish I could forget it and listen/read it again same with all his books though, love them up there with my favourites and a total joy

I am a great Rankin fan, have been through a lot of his work and was revisiting an old favourite in the format of a digital audiobook for the first time,
this was a awful experience with every third word being missed out either partially or completely, just not good do not pay for this service.

Pulled off the Pooley!

Awesome, absolutely loved this! So funny and kept true to the Brentford legacy. Even playing around with the complications of time travel did not detract from the humour, but instead added to it.