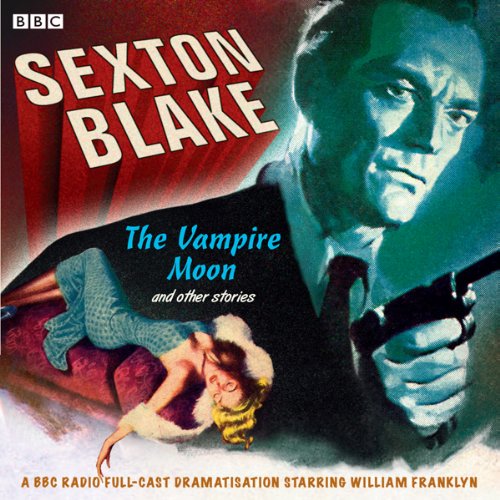 Sexton Blake: The Vampire Moon and Other Stories

William Franklyn stars as paperback hero Sexton Blake, with David Gregory as his assistant Tinker, in four original BBC Radio dramatisations from 1967. Lost from the BBC archives for over 40 years, these rediscovered episodes are presented for the very first time.

‘The Vampire Moon’: Sexton Blake and Paula Dane are out at a London restaurant, when one of their fellow diners suddenly collapses. His dying words warn of the danger of the Vampire Moon. Featuring Marjorie Westbury (Paul Temple).

‘The Fifth Dimension’: Harry Monkton wins £84,000 on the Pools. Then, one day, the phone rings and he disappears….

‘First Class Ticket to Nowhere’: Lost in the fog, Sexton Blake and his friends stumble across a deserted railway station. Then there’s a gunshot….

Plus a special bonus episode - ‘Murder on the Portsmouth Road’. In one of Britain’s earliest surviving drama recordings (from 1930), Arthur Wontner stars as Sexton Blake, tracking down a killer on a stormy night.

WARNING: Due to the archive and off-air nature of some of the source material, the sound quality may vary. Also, some of the language on this recording reflects the era in which it was first recorded.

These old fashioned 1967 sexton Blake's are great for a lazy dark Sunday afternoon of thrills spills & plenty of good old fashioned policing.
Ordered by accident, not normally my scene but glad I did for they are like a good old black 'n' white movie.

"There's nothing foolish in being murdered Charlie" This is the smooth talking Mr Blake, all suit & wit, Mr Cool.

Soundtrack is perfect no crackles or hisses, perfectly clear. The recordings can not be faulted.