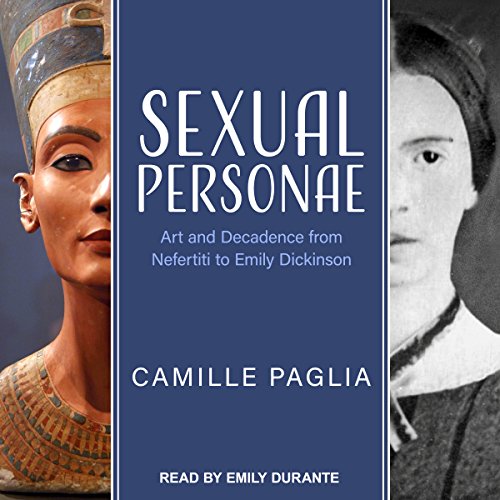 In this brilliantly original book, Camille Paglia identifies some of the major patterns that have endured in western culture from ancient Egypt and Greece to the present. According to Paglia, one source of continuity is paganism, which, undefeated by Judeo-Christianity, continues to flourish in art, eroticism, astrology, and pop culture. Others, she says, are androgyny, sadism, and the aggressive western eye, which has created our art and cinema.

Paglia follows these and other themes, from Nefertiti and the Venus of Willendorf to Apollo and Dionysus, from Botticelli and Michaelangelo to Shakespeare and Blake and finally to Emily Dickinson, who, along with other major 19th-century authors, becomes a remarkable example of Romanticism turned into Decadence.

"'Pagan' in its own pictorialism, sprawl, and unstopped prose, [Paglia's] unusual book creates its brilliant effect from an explosive fusing of scholarship and theater." ( Kirkus)

What listeners say about Sexual Personae

throughly enjoyed this. went in unsure but it was so insightful and the view point given was eye opening.
you know, things like how women dress as men to be strong like a man. be ready to do a man’s job. men that dress as women are seeking God, because they will forever envy their mothers.
and examples are given.
same with the concept of women having power. why in modern day as well throughout history woman have power over children, or those not yet at adulthood. why men mostly assault and rape women. woman can’t more than they don’t. and they do, throughout history and literature but with minors, where they have the dominance.
this lead to a quote “experience always wins against innocents” it’s just so good at feeding your mind. i really wish i had read Camille Paglia when i was back in school, i wish they had taught us this book in school.
take a bow Camille Paglia, take a bow.
*applauds*

A great book and author.
It would be great if the narrator knew how to pronounce the more complex and ancient terms Paglia regularly uses. It is obvious whoever recorded this did not know anything about the material.

A great amount of Paglia's personal and presumably internally consistent interpretations of the artists in historical poetry and literature. Especially as that art could be relayed as sexuality, or expressions of "Sexual personae".

Best book of the 21st century.

Paglia is one of the greatest minds of the century, and this book has never been more relevant.

a tad repetitive, but very thorough

Paglia's scholarship and analysis is apparent to any reader. She is much more aggressive and personal in her tone than most, but it makes the book significantly less dry and more fun to read.

The opening chapter is fascinating and must read. The rest is only useful if you need proof of the claims made in the opening.

This is one of the best works of literary criticism that I’ve ever encountered. Particularly the first five chapters. Paglia hammers her point home, but it eventually becomes predictable. Once she’s taught you to see through her lens, it becomes hard not to do so.

thanks for your work camille!

Mind expanding, a golden stitch work to become wrapped in! The authors accomplishments in this book are inspired and inspiring.

The firebrand feminist critic brings her cleverly incisive and rollickingly refreshing look at the Western canon. She shows a granular knowledge of cultural archetypes and employs a justified boldness to challenge conventional criticism. One may disagree with facets of her critique or certain conclusions, but they nevertheless make for an interesting listen and encourage a deeper look and appreciation for the West’s cultural patrimony.

Paglia is the most remarkable intellect

How anyone can even internalise the entire Canon of Western art, let alone process it so comprehensively and then so accurately discern the underlying psychological processes giving rise to it is completely and utterly dazzling.

To then so lucidly share that stunning analysis is still more impressive.

Camille Paglia is the most remarkable intellectual I have ever had the good fortune to discover. Her appearances on YouTube are all worth seeking out and learning from.

A masterwork. Paglia bends her voracious intellect to the canvas and furiously paints for us a staggering mural, encompassing the very totality of art, literature, history and the inner life of mankind. The result is a truly inspired work that weaves a tapestry connecting image, myth, language and ritual back to the very dim dawn of humanity. True to form, Paglia is at times brazen, at times lovingly delicate, and yet always seductive and playful, beckoning the reader with a knowing wink to come and see through her piercing eye to the heart of the human experience. Breathtaking in its scope and intricate in its nuance, this book is a celebration of our inner truths that could heal the world if understood correctly. As for the performance, Emily Durante perfectly captures the bright, smiling confidence and cheeky whit of Paglias voice, all while keeping the pace below the blistering speed for which the author is famous, allowing mere mortals to keep up. I have listened many times, and will listen many times again. A wonderous work, a perfect performance. Thank you for this gift.

The narrator was outstanding. It felt as if I was listening to the author herself.