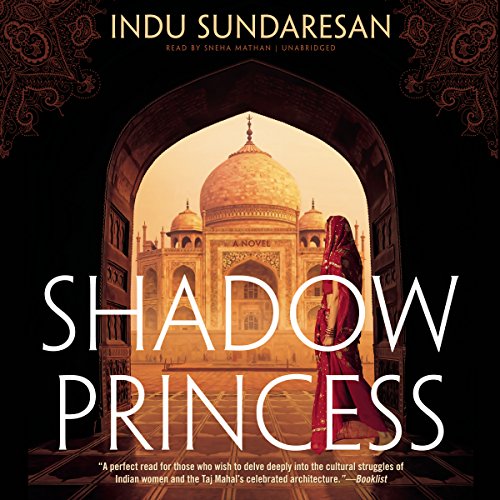 Critically acclaimed author Indu Sundaresan returns to 17th-century India as two princesses struggle for supremacy of their father's kingdom. Trapped in the shadow of the magnificent tomb their grief-stricken father is building for his beloved deceased wife, the emperor's daughters compete for everything: control over the imperial harem, their father's affection, and the future of their country. They are forbidden to marry and instead choose to back different brothers in the fight for ultimate power over the throne. But only one of the sisters will succeed. With an enthusiasm for history and a flair for rich detail, Indu Sundaresan brings listeners deep into the complicated lives of Indian women of the time period and highlights the profound history of one of the most celebrated works of architecture in the world, the Taj Mahal.

What listeners say about Shadow Princess

What a lovely book, I like this trilogy and this one in particular. Loved reading all three books. Enjoy.

it's detailed n beautifully narrated, I enjoyed the audio during to fascinating story and narration it was one of the best audio books that I throughly enjoyed

The book was interesting and loved the way story was narrated. I am sure there was a lot of imagination used while forming the sentences and dialogs, it managed to keep me hooked and listen to the complete book with full interest.

I really enjoyed this book. The author just transported me to another place and time, full of beautiful sights and sounds. The descriptions of palaces and delicacies, rich materials and jewels was beautiful! The wealth of the Mughal Empire was astounding, and the reader becomes a witness to the amazing life the Royal Family leads.
Strangely, I didn't like the main characters...(except for Jahanara's lover.)

The narration was absolutely beautiful...I could've spent many more hours listening to her beautiful voice, the elegant accent and pronunciation. Had I read the book myself, I would have struggled with the names and words that are foreign to me...instead they became enchanting sounds to my ear. I have never had the desire to visit India, until I experienced this book! Loved it.

One of the best book series on Mughal India

excellent written. this iBooks has more to offer than my claimed historical accounts of Mughals.

Great story. Hated the skips in the recording and repetition of recording in certain areas. Sneha mathan rocks. No one else can read the Indian historical stories in such a compelling fashion.

Love this book and the narrator. Employs all the senses. I hope for more from this author.

Another superb book by Indu and beautiful narration by Sneha, her voice is so captivating I did not wanted to stop listening, she brings each character to life.
The book is an excellent source of history about emperor Shah Jahan how he built the Taj Mahal and about his daughter who ruled his harem and courts.
Overall an excellent must read

I was captivated by all three books, but I did struggle at times with so many names I am not familiar with. I can't tell a person's name from a place or a sword or an elephant, and I'm still not sure about the clothing names. The reader was fantastic, and I understood enough of the story to get to the end.

Not my favorite in the series, but a good read. well written. Historical fiction is always my favorite to read. This story does not disappoint.

Based upon historical India, the author & narrator whisks us away to the Mogal Empire India. Highly recommend this series!!! Well done!!

A well written historical story. It’s sad and enlightening. I recommend it and the two books before it.

The book series has run it's course

Not as good as the earlier books in the series. A little tiresome, repetitive, and kind of boring.

Beautiful narration and a captivating tale

Such lovely narration and beautiful story . So rich and colourful captivating. Highly recommended for India buffs.