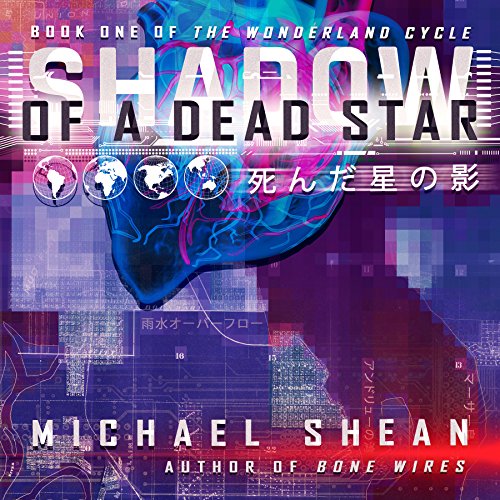 Shadow of a Dead Star

Seattle, 2078. The future hasn't been kind to the spirit of humanity; commercial obsession and technological fetishism rules the day, religion and belief has died screaming in the fires of war, and what remains is moral decrepitude.

Life in the future is hard on the soul. As an agent of the Industrial Security Bureau, Thomas Walken knows that better than anyone. His job is to keep the worst kind of black-market technology out of the hands of citizens, technology born out of the shadowy nation nicknamed Wonderland. But the kind of fantasies that come out of that place aren't for the good people of the world. Wonderland technology is like black magic made real.

Walken's newest assignment starts out simply: intercept a smuggled shipment of Princess Dolls, little girls turned into sex toys, and bring them into custody. But when the girls are hijacked from federal custody and Walken gives chase, he finds a trail of bodies in their wake. Before he's through, Walken will find himself confronted by revelations that will answer every question that the troubled lawman has ever had about himself and the world he lives in - but his mind and soul may not survive it.

A dark, brooding piece of future noir, Shadow of a Dead Star will take you down the rabbit hole on a ride you won't soon forget.

I found this book to not really hold my interest, but I kept going hoping it would get better. Eventually we get a female character who sounds like she is a middle aged waitress in an interstate cafe, but she's a totally hot "well endowed with slender frame" high tech hacker. After another while, main character and she get in a sexual relationship where he does stuff like holds his hand over her mouth, chokes her etc. I was still thinking that maybe the story could outweigh this objectionable part, but in short order, main character starts bossing around girlfriend like she is a bad child and she gets "turned on" by it. Yuck, grow up boys. This is not the way to get girlfriends, believe me. Returning book.

i did not like. i did not finish. it was a waste of my money. I kept waiting for something that would make me want to keep reading. I didn't.