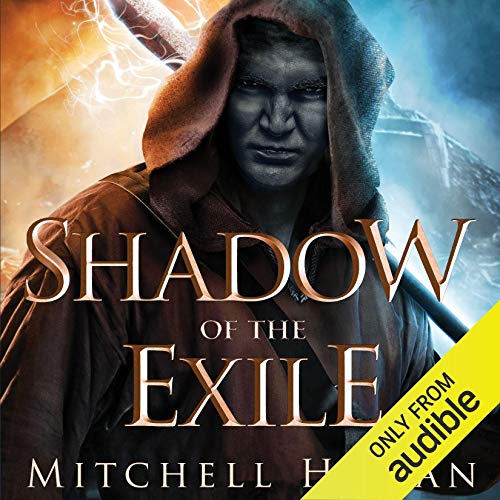 Outcast and exiled, the demon Tarrik Nal-Valim has long been forgotten by the world of humans. At least, so he thinks. But when he is summoned as a last resort by a desperate sorcerer, it seems as though his past has caught up with him.

The sorcerer is Serenity “Ren” Branwen, the daughter of Tarrik’s former master - and friend. Though she seems cold, driven, and ruthless, Tarrik can tell Ren has her back against a wall, and he is compelled by ferocious powers to obey her.

As their world sinks into a terrifying maelstrom of murder, intrigue, and insurrection, Tarrik is forced to serve Ren’s arcane designs - plans that, if they were to succeed, would resurrect unimaginable power and could destroy Tarrik’s entire race.

But as events unfurl, the lines between demon and master become blurred, and Tarrik realizes Ren is not what she seems. To prevent utter devastation, Tarrik may have to surrender what he values most: a chance at redemption and an end to his exile.

What listeners say about Shadow of the Exile

He did it again!

Hogan certainly did it again in this riveting sequence that started with his Revenant Series. I love that this book was written from a non traditional character pov. After Revenant, the readers wonder how things will turn out for the future and Mitchell doesnt disapoint. I loved the world building, going through great fight scenes, never felt a dull moment. There was a little bit of something for everyone here. Intriguing magic system, a bit of a mystery trying to be solved with the overall main character and his relationship to the mistress and what her intentions are, adventure, touch of romance. Such a great story, cant wait for the next one if he gets to continue the series, and the ending I especially loved! I did not expect it to end the way that it did and I read a LOT of fantasy.

Great fantasy. Has betrayal, forced servitude, unexpected alliance, and a common goal. I like that the two that are thrown together do not reveal all to each other but learn to trust. This imaginative story has so many twists that the next book was one I waited for. Having read the second now I can say dive in. There is more to come. The characters are well thought out and there are unlikely heros and heroines. The end of this is explosive and will be talked about in the next book by many. Enjoy. Exile is not what a demon wants but nor is a summoning.💫

Much Better Than I Expected

I was expecting a mediocre fantasy/fiction novel. I am amazed at how the author gives us another insight into demons -- which is within the realm of reason. I care about these characters and often think of them when not listening.

I am on the second book and the series is getting more intriguing with more depth in the plot and characters.

Highly recommended. I do hope these characters will make it to subsequent books.

I so loved this book! it is well written, has a great story that is still easy to follow, and just as importantly, it hits the ground running and doesn't stop! I love the lack of boring "down time". That's not to say it's non-stop action (it isn't), rather it's "lean and mean" without unnecessary filler. The narrator is also absolutely top-notch and I hope to hear more from him. Looking forward to the sequel!!

Shadow of the Exile is an enjoyable tale that follows a typical narrative.

The story does not subvert expectations and is typical of the genre.

The narrator’s ignorance of what is taking place adds to the story.

This is a book I would recommend.

Just have to say one of my favorite reads in awhile! Great characters, can't wait for the next one!

I'm waiting for what should be a third book! Love the readers voice and creativity of the author!

I can't wait to hear the next book. Look like a great start to a new Saga

Thrilling story of sorcery and demons

I really like the story and the challenges the characters had to endure. The only thing that keeps me from listening to this book again is the end. I will give no spoilers but I will say they ruined it for the next book in the series for me.

Poorly written, inconsistent, too many convinces and plot holes, characters named introduced described then dropped instantly with them having no impact or consequence on the story, what characters there are are wooden, pacing is bad. the worst bit are the protagonists relationship with each other is unbelievable. their really is an intresting world here though its just a shame we dont see more

I was expecting good things from the summary but all that happens is the main character thinking and being stupid and boring no good development ever happens and I'm over it 9.5 hours in and I'm not listening to it anymore

Sympathy for the devil.

This was an absolutely fantastic book! Set in the same universe as the book Revenant Winds, but set on another continent and a few hundred years before R.W. It follows a demon, Tarrik Nal-Valim who is summoned and bound into slavery by a seemingly nefarious sorcerer working to bring back a mad Arch demon.
set entirely from Tarrik's p.o.v, it actually manages to make a demon protagonist likeable. His struggle against the indignity and injustice of slavery was surprisingly deep and meaningful.
As a fantasy book alone, the story was compelling. I just had to keep listening to find out what happened next.
Initially, I wasn't sold on the narrator, I have to grudgingly admit that his voice grew on me. I still prefer the one who did Revenant Winds, but this one did a good job.
All in all, I really can't recommend this book enough!