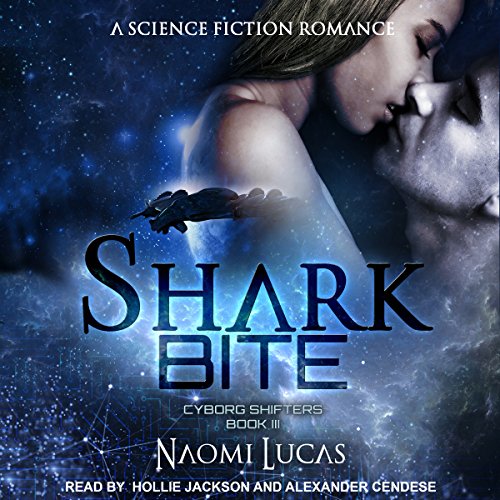 Netto was a Cyborg, a protector, and a contracted mercenary. His specialty was the water: shallows, salt water, and open oceans across the universe. He was also a freak forged from the DNA of a bull shark-blue-gray skin, a body built with power, and a double-set of razor-sharp teeth. His nomadic lifestyle came to a halt when his old employer, the Earthian Planetary Exploration Division, offered him his old job back.

Rylie was born and raised on the planet Kepler, on an agri-lot that farmed jewels from the sea. But something was happening to her family's lots and people were disappearing. When a giant Cyborg showed up at her settlement and struck a deal with her father, she was forced to follow the stranger out onto the water, into the dangers of the alien deep, and far beyond the sight of land. She feared the Cyborg. She feared his teeth. But she feared the monsters in the water more.

What listeners say about Shark Bite

There has to be more audio for this series, it's too good not to! Netto is so easy to love. Here is this big, strong male. That is insecure about a few things, which won me over.

Love the the writing. Love the characters. The male narrator does a fine job. The female narrator is ok with the characters voices but her actual narrative parts sound like she is reading a drivers ed manual. Otherwise, I highly recommended this series.

This book was highly entertaining. Really! I loved it, not so much because of the hero/heroïne, but because of their more manipulative, take no prisoners sidekicks. Especially the no nonsense Janet. She and Zeph had more personality and less self-confidence issues than the Netto/Riley couple. And am I delighted that Janet/Zeph have got their book. Will be reading it !

This was a really good book and I really enjoyed it the scenes are hot in the story is great! Also the narrative was on point

Great addition to this series!!

I absolutely love this series! It has lots of action as well as lots of steam. It is about a beautiful but socially awkward women and a disturbingly handsome half shark, half man cyborg. All his life Netto has been used as a hunter/killer and never as the protector. However, when he first meets Riley he knows he will do anything to make sure she and her family are kept safe even if it means his mission does not succeed. I listened to this book through Audible Escape and cannot wait for the next in the series.

More of the Series Please!

This is the best Series I've listened to in a while. Alexander Cendese and Hollie Jackson were great made the characters come to life. We need more of this series!

Well, I have this book on kindle,paperback and now audible that's how much I like it and I like the narrators I think they flow well but I think it is really silly to have two narrators and they are still doing the opiates part on there section.

Not one I'd reccomend.

Struggled to finish, a bit boring. Story seemed to lack romance, structure or believability. Not a books I'd reccomend, or read again. So many other fantastic Alien/cyborg romances.