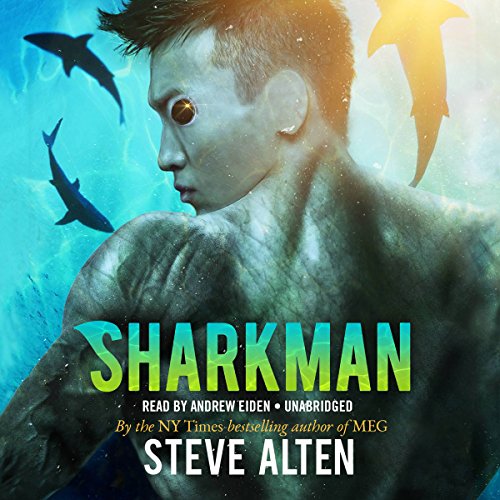 Kwan Wilson was a high school basketball star living in San Diego when a tragic accident changed his life in ways no one could predict. He only looked at his phone for a few seconds, but that was all the time it took to crash his car into a telephone pole, killing his mother and paralyzing him from the waist down.

After the accident, his father, Admiral Douglas Wilson, sent him off to live with his maternal grandmother in South Florida. Kwan's new principal, anticipating his depression and isolation, tells him about an internship at a genetics lab in Miami that is testing shark stem cells on rats in an effort to cure cancer and repair spinal injuries. Kwan declines, until he learns the beautiful Anya Patel is an intern at the lab. When Kwan takes the internship, he learns that the good news is that the stem cells are curing their rat subjects; the bad news is it alters their DNA so much, it kills them. But after a promising breakthrough is made, Kwan risks his life and injects himself with the experimental stem cells, forever altering his destiny and the lives of millions in the process.

There are a lot of fantastic books in the world,

this is not one of them. The story was uninspired, the characters were so unrelatable, the whole shark analogy was shoved down your throat before you even get to any major plot. I wanted to strangle the main character more than half the time, because no one in real life acts like that. This was obviously written by someone who enjoyed basketball because any part having to do with it was overly detailed, absurd, and just didn't need to be added. The conclusion was very lack luster, this book leaves so many things to be desired. I got it when it was on sale for 3.00$ and it wasn't even worth that. Get it if you want to have a laugh at how ridiculous and bad it is.

I didn't care for this book. It's as if it couldn't decide what it wanted to be. Kind of Science Fictiony but not. There were (fairly mild) descriptions of sex scenes that might have appealed to teenagers yet some of the language was flowery and poetic, inconsistent with that genre. It threw in random political tirades yet wasn't a political thriller. It was anti-religion but pro God. It was anti-military throughout so it was consistent on that front.

I'm not a literary expert but frankly I didn't think the writing was great either.

On the other hand, the narrator did a great job.

Would you listen to Sharkman again? Why?

It was a great performance by Andrew Eiden. Loved the story and action. Characters were great.

What was one of the most memorable moments of Sharkman?

Learning the true feelings of the father.

Overall tone of the read was great. Very easy to listen to. Just a great job overall.

Well that would be great, but never get a chance to sit there for that long of a period.

While I know it is all summed up for now, it would be interesting to see more stories come where he can use his abilities to help. I think there is an opportunity to make a series. Really loved the book, if you are a fan of Steve, give it a whirl. I think you will really enjoy it.

This book leaves you wanting a sequel. thats the worst part I coumd find with the story.

Too sudden an ending

I felt that the ending seemed rushed, otherwise good overall. Thought maybe the package going back to the abyss, with the Tigress taking care of the Admiral and friends might have been a more deserving fate.

I'm not sure which was mentioned more, God or basketball. It took a long time to get through the story, I kept taking breaks from it. The narrator did an excellent job.

This will sink it teeth into you

This book has an excellent premise, good story-line, characterizations and perhaps even some good moral lessons. I would think this will be made into a movie. The reader does an excellent job as well. It reads like a good super-hero story. Marvel move over.

Steve Alten rarely disappoints and this book is no exception. a great story that he hopefully revisits.

Really enjoyed this book. It was different but very good. Had some real twists in it.