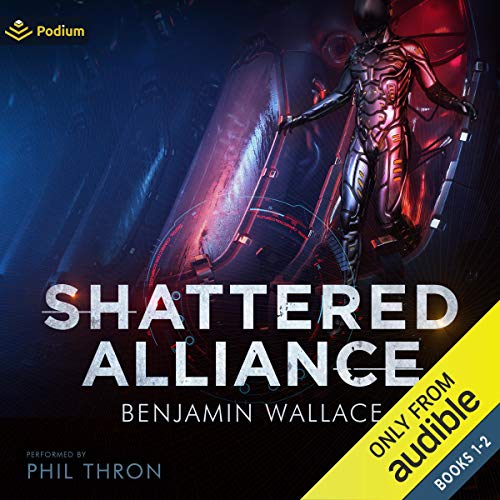 Contains books one and two of the Shattered Alliance series.

The galaxy will never be the same again. A surprise attack during a routine First Contact ceremony turns the Alliance’s flagship into a firework display over the desert planet Shandor and lands Captain Thurgood, and several of his crew, in the hands of an enemy they never knew existed.

For the first time in its existence, the Alliance finds itself outmatched and powerless to act. It falls to a corporate spy, the galaxy’s most wanted criminal, and a soldier from another era to rescue the Captain and his crew. Whether they succeed or fail, the fact remains that the balance of power in the galaxy has shifted and nothing will ever be the same.

Send in the Clones, book 2

The Hell Drivers were built for one reason: to make the enemy wet their battle pants. Composed of clowns, bears, wolves, doctors and even Death itself, this legendary squad of battle rigs was based on the most common fears in the galaxy, and piloted by the biggest bad assess the Alliance could find. Now, they’re needed once more, and Commander Blayse Vides has filled the terror weapons with the only men he can trust to do the job...a dozen clones of himself.

Along with The Oncilla, their job is to get Ambassador Decote and his family off of Mirada before the planet joins the enemy empire. It’s the clones’ first mission as a team and it’s not going to be easy. They all hate each other.

F.U.N INC! Lol No really though, this book was amazing. Lets get through a couple of the negatives first though, because there are a couple. As with every book in existence :)

Weaknesses
The Main Character is a bit... dumb... and a little unlikable. Well, very unlikable. At least in the first book yet. I haven't gotten to the second book yet, so I will update this when I do.

Strengths
The snark and sass of every person in the entire series coupled with the fact that the bad guys are the 'straight men' for the jokes makes them land very well. The premise is highly interesting, and basically a satire that pokes fun at star trek and every generic human led "Union" in space sci fi's ever. Really great stuff there.

I can't wait to dig into the second book. I suspect the negatives are going to become strengths. In which case I will update :)

OMG WTF THIS IS FANTASTIC! Holy cow. Killer Clowns murder hoboing their way through a way. I just, I just can't explain how amazing this is. Really, just buy this book.

funniest book I've ever listened to on Audible

this is absolutely the best book I've listened to in a long time. If you love Star Trek and you love satiric humor you will love this. It is absolutely fng hilarious

This would be a fun package for anyone, but for readers 'of a certain age', the pop culture references that are scattered like Easter Eggs throughout the stories are laugh out loud funny. Great action scenes, wonderful sense of humor and Ben avoids the trap of slow moving romantic subplots. AND I could listen to Phil Thron read the phone book. Do they still make those..?

This is a great listen

I have really enjoyed all of Benjamin's books. This one did not disappoint. someone else said they had them at the clown and I could not agree more.

The Shattered Alliance Publisher's pack includes the first two books in Benjamin Wallace's Shatter Alliance series, a hilarious , action packed space adventure. The galaxy is at peace...or so it seems, until a new power appears and shatters the peace by decimating Earth's flagship and basically declaring war on all those who side with Earth and refuse to bow to their power. Both books are fantastic and feature a crazy cast of characters, wild action, and Benjamin Wallace's trademark over-the-top humor. I can't even begin to guess where the story will go from here, but I look forward to finding out. As always, Phil Thron knocks it out of the park with his narration.

Phil thron nails it again with his narration. Benjamin wallace brings out yet another excellent story and beginning of another great series! cant wait for what's next.

These books are very much Benjamin Wallace. I loved them. There is a good character progression and the action isnon point. The only drawbacks to these books is: 1) The stories just end (as in they just abruptly stop) 2) The series is not complete, so I have wait a to find out what happens next..

I love all the Boom Box books and this duet of books is every bit as well done. I love it when a book can surprise a good laugh out of me and this set did that multiple times. Good story and well written.

my current favorite Wallace/Thron book series. I'm hoping these get published at least 1x a year.

Love the narrator! The second book was better than the first, imo. Both easily worth the time and credit.

I love Phil Thron as a performer he brings what is an excellent book to life.

Anyone else here Mech though?

I haven’t laughed so hard in ages. Great author plus fantastic narrator equals awesomeness, can’t wait for the next one.

Really enjoyed it, particularly book one as I loved the character, very different character actually so I did chuckle. Phil did awesome job acting and I just chilled out whilst driving to work listening to it. Obviously keeping alert etc. So just want dto say thanks, a decent listen!

Can’t wait for the next instalment.

I didn't enjoy as much as the Duck & Cover or Zombies but still definitely worth the money. Brilliantly read by Phil Thron and I'll definitely be reading the series as they are released

A fun story but I hate everyone in it

Brilliant narration from Phil Thron saves this story, but overall it lacks any great depth of character and what I do find out about them generally makes me hate the main players rather than love them. I did like the idea of the main plot, so I may give the second book a go at some point to see if it improves.

Just as you would expect from Mr Wallace

another brilliant and funny book from Benjamin Wallace. I can't wait for the next book in this series

Simply brilliant! I can’t wait for the next in the series. I can’t think of anyone who wouldn’t enjoy the series, but if you like Benjamin Wallace’s previous stuff you’ll love this.
Daniel Inwood. Christchurch NZ.