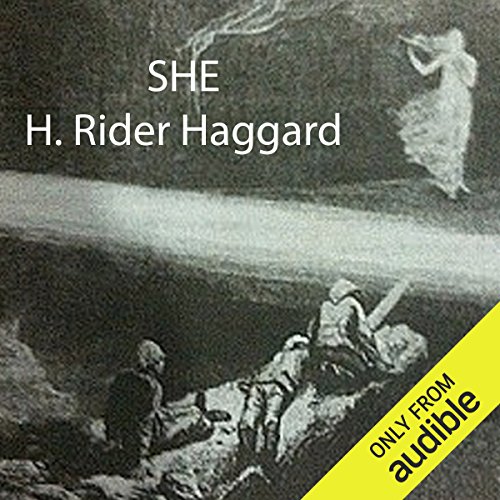 One of the best-selling books of all time, with over 100 million copies sold in 44 different languages. The novel was extraordinarily popular upon its release and has never been out of print.

Follow the journey of Horace Holly and his ward, Leo Vincey, to a lost kingdom in the African interior. There they encounter a primitive race of natives and a mysterious white queen named Ayesha who reigns as the all-powerful "She", or "She-who-must-be-obeyed". In this work, Rider Haggard developed the conventions of the Lost World subgenre, which many later authors emulated.

This is the blueprint for the Indiana Jones series.

What listeners say about She

The book itself is a fun adventure which yields exactly what one would expect from a book written in this time. I personally enjoy the narrative style, along with the slow and thoughtful considerations of various scenes and events which break up the immediate plot considerations. The story itself is good: it kept me interested.

The reader, however, was a struggle. He mispronounces several words, and one particular name throughout the WHOLE book which, for the first several hours, gave me a "nails on the chalk board" feeling every time he said it. He also struggles to give the inflection in dialogue which the narrative itself suggests. However, there are no "mistakes" per se, and his voice is very easy listening.

I love the story and was looking forward to listening. I couldn't get past the first chapter. the reader pauses ever 2-4 syllables. it's just unbearable listening.

Would you try another book from H. Rider Haggard and/or Alan Munro?

I would not buy another book narrated by Alan Munro - his poor pacing and choppy performance is exceeded only by his abysmal pronunciation. He takes a wonderful story and makes it exceedingly painful to listen to.

The story itself is classic in every sense of the word. It is a foundational work in the genre. It is absolutely on the same level as John Carter of Mars and Tarzan.

I have read the book myself and wanted try out the audible version. Very disappointed with the way the story was narrated . Terrible elocution and monotonous voice. very disappointed indeed. The guy tries to read in different accents and voices and does a terrible (and rather offensive) job of it. I hope Amazon will remove this version and get a better one.

Hard to get through as every little thing seems to have to be described in detail. Still a good story.

A classic in the truest sense of the word. Excellent story & outstanding prose. The reader did a great job with a lovely voice.

Classic of its time, sometimes uncomfortable

First of all, whoever thought of using an American to voice this most English of authors? It just sounds utterly wrong and unbelievable. Apart from the accent, the narrator's voice is dull and he makes no attempt to differentiate between characters. The sound level varies. I wish I hadn't wasted my money on this and I hope that whoever reads this will take note.