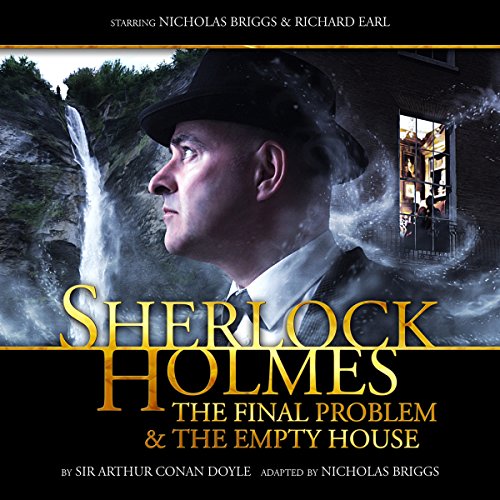 Sherlock Holmes visits his good friend, Dr. John Watson...but Holmes is not his usual composed and supremely confident self. He is a hunted man.

Having unearthed the criminal mastermind behind the greatest crimes in the land, Holmes has found himself a fugitive. But the great detective already has a plan in motion. It will not be long before his arch foe, Professor Moriarty, is in custody. If only Holmes and Watson can manage to stay alive in the meantime.

Still lamenting the death of his valued friend and colleague, Sherlock Holmes, Dr. Watson finds himself intrigued by a murder case. But as he begins his investigations, a strange old man enters his consulting room.

Could it be that Sherlock Holmes is back from the dead and, even now, working to solve a murder? The game is once again afoot!

"The real revelation is Nicholas Briggs's performance as Holmes. Confident and assured, yet understated, and shot through with just the right amount of emotion, bravado and eccentricity, Briggs has delivered one of the definitive portrayals of the character...along with Rathbone, Brett and Lewellyn." (Mass Movement Magazine)
"Briggs, who had played Holmes on stage with style and authority, takes the lead in the rest of the Big Finish productions, with Richard Earl as his stalwart Watson." (The Sherlock Holmes Miscellany by Roger Johnson and Jean Upton)
"Richard Earl is masterful as Watson, carrying the burden of the story. He sounds a youngish and bright version of Holmes’s friend and has a wonderful way of subtly bringing the action to life. Nick Briggs is a fine Holmes, enigmatic and dramatic by turns.... If you like your dramatised Holmes unadulterated, strong on atmosphere and rich in detail, this is the CD for you." (The Sherlock Holmes Journal)

Where does Sherlock Holmes - The Final Problem and The Empty House rank among all the audiobooks you’ve listened to so far?

What other book might you compare Sherlock Holmes - The Final Problem and The Empty House to and why?

Of the other Sherlock Holmes stories written by Doyle and others, these two stories bring the "death", then resurrection of a character. This has been imitated in other series books, movies, and television. Sir Arthur Conan Doyle's method serves as a template for writers as a resource.

Nicolas Briggs performance as Sherlock Holmes keeps the excellent standard for portrayals that is on equal footing with Basil Rathbone, and Jeremy Brett's interpretation of the famed detective. Briggs brings to Holmes the logical deduction and motivations that make the detective more lifelike and approachable. Richard Earl's performance as Dr. Watson is also on a high level with Nigel Bruce, David Burke, and Edward Hardwicke's renditions of the good doctor. The chemistry between Briggs and Earl can be felt as you listen. It is rare that such chemistry can be accomplished. Big Finish Productions is to be commended for this.

I had a hard time pulling away from this book because it is so compelling. I have listened to it several times already picking up details that I missed from a previous listening.

For Sherlock Holmes fans, I think you will enjoy Nicolas Briggs and Richard Earl as Sherlock Holmes and Dr. Watson. Their performances provide a "movie" for the reader's mind.

Fabulous performances with built in atmosphere, left me wanting more, it's very seldom you come across storytelling this good, definitely a favorite, will look forward to playing it again.