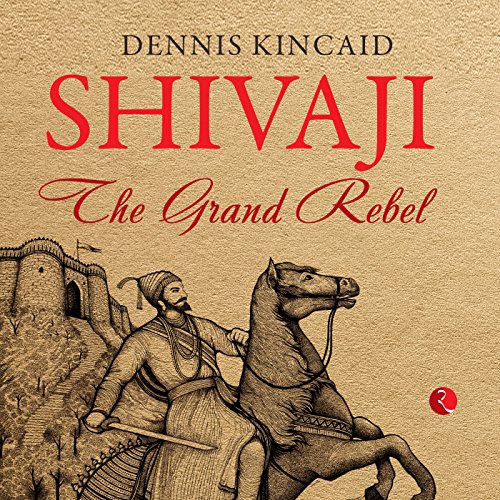 A great warrior and skilled administrator, Chhatrapati Shivaji Maharaj, better known as Shivaji, was the founder of the great Maratha Empire and one who instilled a sense of Maratha identity in his people.

At a time when the Mughal Empire was at its zenith, Shivaji was the only one who dared to challenge the might of Emperor Aurangzeb. He steadily grew his army from a humble contingent of 2,000 soldiers to a force of 100,000. Assisted by a disciplined military system, a well-structured administrative organization and a deeply traditional society, soon the Maratha force became the only military power of consequence against the Mughals in India.

Including accounts of legendary encounters like those with the Adil-Shahi Sultanate and the menacing Aurangzeb, Shivaji: The Grand Rebel is an epic saga of an Indian warrior king whose tales of victory and valour have been inspiring the nation for centuries.

What listeners say about Shivaji

Life of a great king detailed in epic prose

This is a fantastic book which gives us a very good picture of the great Indian king and the founder of the Maratha empire Shivaji. Kincaid, a British civil servant wrote this book in the 1930s when the atmosphere of India was charged with the fervour of nationalism, seeking independence from the British occupation. Kincaid's main aim in the book was to introduce to the western audience the life of this king who had hiterto been dismissed as a "brigand", a word which didn't do justice to the enormous respect which Shivaji's name commanded in the Nation. Based on Marathi sources, the letters of the East India Company, Mughal historians and then accounts of the Italian Gunner Manuchi, the book presents a detailed account of Shivaji's rise from a son of a Bijapur official pursued by Shahjahan, to the founder of the Maratha empire which at the end of Shivaji's reign had Bijapur as one of its feaudatory kingdom.

The narration is not unlike that of a novelist who maintains the tasteful tension while describing the accounts of Shivaji's mulitple escapes as a child, his capture of the key Bijapur forts, his encounter with Afzal Khan, his escape from the Abyssinian general aided by the valiant Baji Prabhu, his encounter and house imprisonment by Aurangazeb, the subsequent escape, his raids at the Surat township, and winning back of all the fortresses that he once was forced to give up to Mughal after surrendering to the Rajput Jai Singh.

Kincaid paints an elaborate picture of Shivaji's coronation ceremony done in a manner of the Hindu Kings of the yore, which lasted for over a month. Post the Rajyabhisheka ceremony, Kincaid describes the two victorious campaigns of Shivaji in the southern part of India whose many forts would prove to be key assets in the 28 year war that Shivaji's successors fought and won against the Mughals.

Narration: Sarah Garewal does a good job of narrating this book. He modulates the voice appropriately when giving the accounts of the various actors such as the Mughals, the Frenchmen, the English and the Italian Manuchi. Certain Indian names could have been pronounced correct (Jaadunath Sarkar is pronounced as Jadunath Sarkar) which is slightly jarring to the Indian ears. Apart from this minor quibble, an excellent narration

An Englishman writing about Shivaji in such glowing terms and describing the major events of Shivaji Raja's life with such accuracy and flourish is amazing.

Narration is a let down

Terrible narration and ridiculous pronunciation of names , places etc. I tried to just get through this book just for the sake of completion.

Overall content of the book is good, but seems a bit biased.

A good version of history

this is a good version from a non Indian. it is crisp and to the point

Chatrhrapathy Shivaji was a great and wise king and this book gives more details about his life and times. Thoughrougly enjoyed this book. Thank you.

interesting but not completely authoritative

overall account of shivaji maharaj's life was interesting, although some parts were different from the standard and authoritative texts like Shriman Yogi and Baba Sahab Purandar (most authentic) . also, the parts where exclusively french lines were used broke the flow of story for me personally, they should atleast have provided English translation for those . overall 4.5 star from my side , there are better books available especially the 2 mentioned above