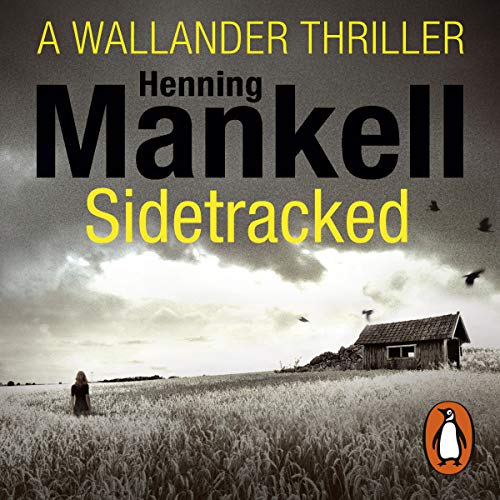 Midsummer approaches, and Wallander prepares for a holiday with the new woman in his life, hopeful that his wayward daughter and his ageing father will cope without him. But his summer is ruined when a girl commits suicide before his eyes, and a former minister of justice is butchered in the first of a series of apparently motiveless murders.

Wallander's hunt for the girl's identity and his furious pursuit of a killer who scalps his victims will throw him and those he loves most into mortal danger.

What listeners say about Sidetracked

Another top tier effort from the ever reliable Hen

An unusual story, but Wallander at his best! Enjoy, excellent 5 * roller coaster ride.

One if the best Wallender tales

This story was full of twists and turns lots of detail. Lots of cliffhangers. I thoroughly enjoyed it.

Great story, well read. Interesting book that had me hooked from the start. Recently, I've avoided the serial killer genre but glad I made an exception for this one. I liked the central character and thought the narration fitted the story very well.

So many twists and turns. You will also be side tracked for sure.
Close your eyes and listen. All your worries and thoughts are out the window, Mr Barret and Mr Mankell's spirit are about to take you on an adventure you won't easily forget...

Aspects of this story felt as if they were pushing into the realm of fantasy and were a distraction to what could have been a good story. As usual it was read so well by Sean Barratt and his turn as Wallander has become my favourite of those who have played this detective.
I think what was missing for me was a deeper dive into the back story, the plot focused on the killings and process taken to track the murderer which made it feel a little two dimensional. Still, for Wallander fans, it is another solid outing for him and his team.

This is the fifth Henning Mankell book I have read and although I have enjoyed all the previous four this was for me the best one so far. First let me say the Narration was top notch from Sean Barrett he brings the characters alive with their idiosyncrasies and flaws while leaving enough for your imagination to fill in the gaps. The story for me was excellent and well-rounded, with excitement and plot developing while building on relationships and characters, linking to the previous books seamlessly. I am looking forwards to the next on, which I have already bought!!

Best in the series so far. Gripping story, well written and narrated. Would strongly recommend

just great....if I could give it more than 5 stars I would...excellent story kept me guessing with its twists and turns and emotion ...this man Henning Mankell is up there with the best...the voice....and different voices...of Sean Barrett made this a wonderful experience..I think it's worth 6* at least

It was a joy to listen to this book. Terrific performance by Sean Barratt. And it amazed me how the themes and the thoughts in the book resonate so strongly still. Terrific book. Highly recommend.