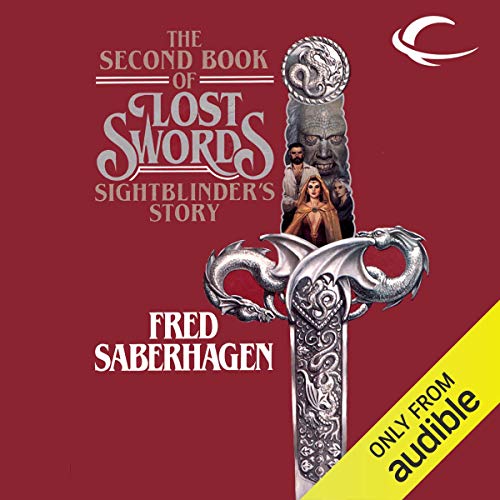 Long ago, the gods forged Twelve Swords of Power and threw them on the gameboard of life to watch men scramble. But they had forged too well: The Swords could kill the gods themselves.

Now the gods gone, the Swords are scattered across the land, some held by those of good heart...others by those whose purposes are evil...and one, Sightblinder, is held by Arnfinn, a young country boy who knows nothing of the Tale of Swords or of Sightblinder's power; to make the viewer see that which he most desires - or most fears.

The tale begins innocently enough as Prince Mark of Tasavalta, accompanied by his nephew Zoltan and doughty Ben of Purkinje, seeks out the castle of the good and mighty wizard Honan-Fu, hoping that Honan-Fu will agree to tutor Mark's young son Adrian. But as they approach the lakebound keep, soldiers set upon them, and Mark is seized by an enormous griffin, carried off to the castle, and thrown into a hellish prison of enchantment.

Honan-Fu, powerful as he is, has been vanquished by the Ancient One, a being at once reptilian and human who has slipped the bonds of time, armed not only with his personal spells and demons, but with Prince Mark's captured weapon, the Sword of Force, Shieldbreaker.

It is up to Ben and Zoltan to rescue Mark. But first they must deal with ex-Queen Yambu, and the unlikely assistance she offers; with the innocent Arnfinn, holder of Sightblinder; and with the stunningly beautiful girl Arnfinn loves - the Lady Ninazu, Honan-Fu's daughter. Not to mention the enigmatic Emperor.

Told with Fred Saberhagen's enormous gusto and narrative skill, Sightblinder's Story will delight the listeners who made The First Book of Lost Swords: Woundhealer's Story a fantasy best seller.

Only non-fives review so far

I usually only review when I love something, and I realize this is a "barn door/stolen horse" situation, but I did not love the production of this book. I'm not sure whether it was the narrator or the producer, but the reading was peculiar. Words were mispronounced, there was inconsistent pronunciation of certain names or words through the text, and there were a surprising number of timing and emphasis errors - weird pauses, or things that should have been read a certain way to provide a particular meaning but weren't. Another issue was the inconsistency of name pronunciations between this series and the previous trilogy, which was narrated by someone else. It all made the listening a distraction rather than an enhancement. I'm going to continue with the series, because I like the story, and I hope things improve in subsequent books.

A good story with well developed plots and tie ins. This is part of a great set of books.

Cynthia Barrett doesn't inspire me like some other narrators do. Otherwise, this is a great listen. Most of Mr. Saberhagen's work is this good or better.

Her resume must look something like " are your protagonists too scary? I'm your narrator. With my almost three slightly different voices I can dumb down even the most intelligent of characters, I can make even the most evil of characters sound like a Disney clown or make any character younger than twenty five sound like a pre teen. I'm proficient in talking slowly to make bigger characters sound even bigger and I can put a southern drawl on any character who needs to sound unintelligent or confused." She is the worst. I won't buy another title she narrates unless it is a children's book for toddlers.