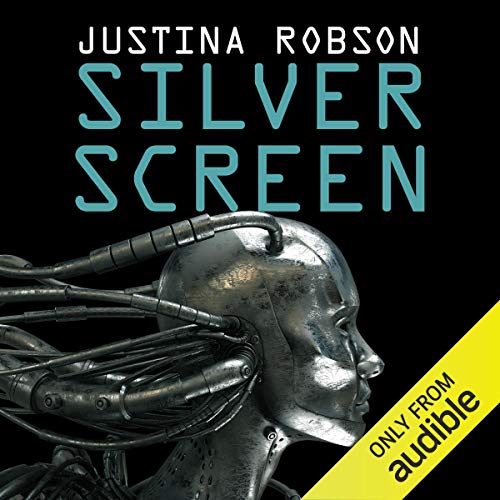 Silver Screen presents an enjoyably different, subversive slant on the science fiction themes of AI and cyberspace. Insecure and overweight heroine Anjuli O’Connell is one of a group of friends who have been hot-housed from an early age to perform in genius-level jobs. But Anjuli worries that her eidetic memory and her friendship with genuine smart boy Roy Croft has been her ticket to success, rather than any real intelligence of her own. She’s put to the test when Roy kills himself in an experiment to upload his mind into cyberspace, seeking that SF dream of bodiless immortality, which doesn’t work as expected. At the same time her boyfriend’s research has led to him harnessing himself to dubious biomechanoid technologies, which pull the user into mental symbiosis, creating hybrid consciousness – a new "I", continuous with the old, but different. "Where does life end and the machine begin?"

Meanwhile Anjuli’s grasping multinational employer, OptiNet, the owner of global communications AI, 901, is locked into an increasingly bitter war with the Machine-Greens, who preach AI liberation. As the case for 901’s humanity, or otherwise, comes up before the Strasbourg Court, expert witness Anjuli is targeted by assassins and entangled in the hunt for an algorithm which is the key to machine consciousness, and which may even be the master-code of life itself.

This story explores many interfaces between humans and their technologies, between the promises of science and the explanations of faith. It is written in a first-person style that mingles elements of detective story and confessional. Alongside its SF content, the book delves into the complexities of friendship, loyalty, love, and betrayal from an intimate human perspective.

"Silver Screen and Mappa Mundi showed intelligence, grace and a lively but humane imagination. Robson's considerable sense of humour lay in ambush, backed up by a postfeminist tendency to look the problem straight in the eye. Combined with a clean, powerful narrative drive and a cosmological sensibility, this clarity of vision now demonstrates itself as her major asset, making her one of the very best of the new British hard SF writers. But it proves her identity too, moving her on, like the Forged themselves, into a space of her own choosing.” (Guardian)
“A cerebral and absorbing novel that explores the nature of consciousness and artificial intelligence... Robson's prose is lean and dynamic, and the speculative concepts are cutting edge and ultra cool. A startlingly innovative take on the tried-and-true theme of artificial intelligence.” (Kirkus (Starred Review))
“... a fascinating peek into the development of one of SF's brightest new stars.” (Publishers Weekly)

What listeners say about Silver Screen

I've read half a dozen or so other Justina Robson books and enjoyed them so I thought I'd give this one a shot. It's a standalone tale which largely ponders the question of whether AI's are living, conscious beings at the heart of it. I'd say it's a decent (though not effervescent) listen, and I have very few grumbles about the reader who generally did a good job (though I did wonder if she didn't have a cold during part of it!).

I fully realize this is petty nitpicking.. but at one point the reader pronounces HAL as "Hach Ay El" and my jaw dropped. Readers can't know everything but I thought anybody recruited to read a sci fi about AI's might at least be familiar with one of the world's most famous/infamous fictional AI's - or at least her editor might be! Ah well, it doesn't actually detract from the story so I forgive her.