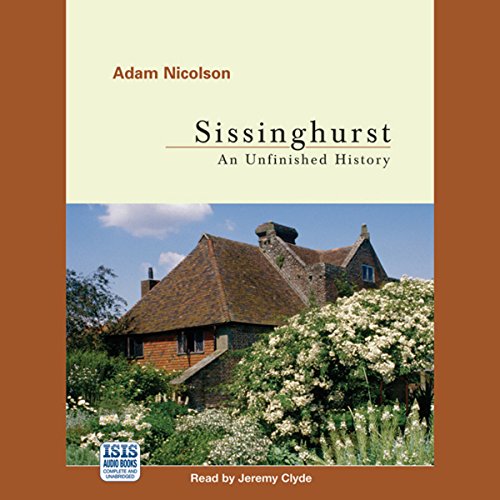 Sissinghurst is world famous as a place of beauty, a garden slipped into the ruins of an Elizabethan palace. But is it entirely what its creators intended?

Adam Nicolson has uncovered remarkable new findings about its history as a medieval manor and on to the creation, by his grandparents Vita Sackville-West and Harold Nicolson, of a garden in a weed-strewn wreck.

Alongside his recovery of the past, Adam Nicolson wanted something else: for the land at Sissinghurst to become the landscape of orchards, cattle and sheep he remembered from his boyhood. Could that living frame of a mixed farm be brought back? Against the odds, he was going to try.

What listeners say about Sissinghurst

This is really two books, interleaved chapter by chapter- one is a history of the Kentish Weald and Sissinghurst through the ages. The other book is about Adam Nicholson and Sissinghurst.

Both books are interesting in their way- but the second one became a little tiresome and -worse- Organic. The main thrust is that Adam Nicholson remembers his childhood at Sissinghurst when Sissinghurst castle stood in the middle of a mixed farm- cattle, hops, apples- and it was lovely (because he was a child, because he didn't have to do any of the back-breaking work- because he didn't have to worry about the profit and loss- and because (reading between the lines) his mother was still there.)

Times change- the 'green revolution' went ahead, in Sissinghurst as well as everywhere else and the farm essentially dissappeared into pasture and arable fields... So along comes Adam Nicholson and wants the farm once more to be alive and vibrant- it's a lovely idea- but to my mind it smacks of trying to recreate a lost eden- and an eden, moreover, that was only really beautiful to those who could sit on the sidelines and watch.

Turning back the clock- or at least making it stand still, is something of a National Trust speciality, but even they baulked at the idea of trying to fly in the face of 50years of farming progress. Adam Nicholson's tussles with the NT and the adaptations of his scheme are very interesting- but interesting in a different way from the history chapters- it's like listening to a mix of timeless history with of-the-moment journalism.

A nicely researched piece, interspersing history (perhaps a touch speculative at times, but often the evidence simply isn't to be had) with a contemporary story of life living with/under the National Trust. Nicolson's is a privileged world, but he understands the toil of those who sustained the house and farm. Such folk come out more favourably than the bitter, impoverished aristocracy who have never come to terms with the NT.