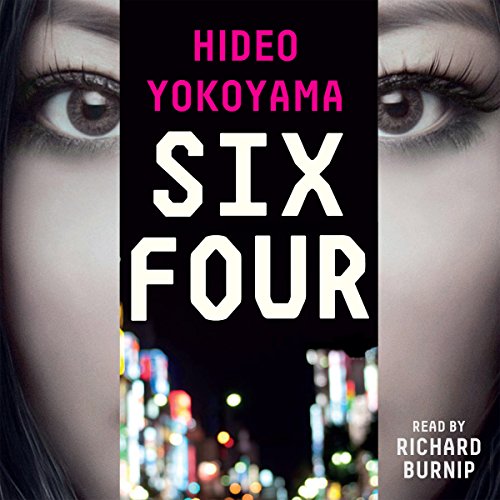 Six Four. The nightmare no parent could endure. The case no detective could solve. The twist no listener could predict.

For the 14 years that followed, the Japanese public listened to the police's apologies. They would never forget the botched investigation that became known as Six Four. They would never forgive the authorities their failure. For one week in late 2002, the press officer attached to the police department in question confronted an anomaly in the case.

What listeners say about Six Four

A surprising story about police bureaucracy

Highly recommended also (or maybe in particular) to those who don't usually enjoy crime fiction.

The writing is rather mediocre. The story is narrated in third person but from the point of view of the main character. Narration struggles to ressemble an individual's internal discourse, often instead telling this as if told by or to a third person. This reminded me vividly of high school students' short stories.

The reading by a single reader works fine in this type of narration, and the reader actually manages to breath life into the otherwise often rather toneless dialogues.

So, why 4 stars for the story? Exactly because of the story. I had never read anything quite like this before. It is unusual police fiction, for it is not primarily crime fiction. Yes, a crime has happened and it is solved in the course of the story, but this story is not primarily about it. It is a story about police bureaucracy and a man in mid life growing as a person in a chauvin professional world.

I know that it is not unusual in modern crime fiction that the police bureaucracy and main character's private life problems are also taken into consideration. But this is something different. Here the crime is in side role, the main character is not the one who solves it. Indeed, he doesn't really take part in the investigations. He isn't even a detective (anymore) and the story is about him and his colleagues growing as persons through a bureaucratic struggle.

The story in Six Four picks up fast, and keeps moving. The characters are well-drawn, often surprising. But the narrator, and in particular the way he voices the protagonist, are extremely off-putting, making it very difficult to bond in any way with the story or the protagonist. Too bad, for sure, because I think there is more subtlety of characterization than comes across in the audio version.

Six Four is not a thriller, or even a mystery. Oh, there is a mystery within the various subplots, but it isn't the core focus.

No, Six Four is an in depth look into the police force in Japan, as seen by the head of Media Relations. It is actually more interesting than it sounds, but don't go in expecting bang zoom action. This is a novel about reflection, examination and duty.

I recommend it, but with a reminder that Six Four is a slow, deep crawl.

Sweet Jesus this was boring

Narration draggy even after speeding it up, in desperate need of guide to characters, and their motivations remain a mystery. The main character is in public relations for the police and half the book is taken up with the relationship with the press. The mystery is a very small part and every bit discussed is gone over and over. While many may find the discussions of Japanese sensibilities very interesting, it made it very hard for me to understand how the characters would behave and frustrating to see their perverse priorities. it's just really, really boring, sorry to say.

It's a struggle to get into, the Japanese names and the regional British accent Burnip gives to them doesn't quite fit, it's also very dense almost an examination into the Japanese police system, however at about the 5 hour mark it clicked and turned into something quite special and unique. It also takes a direction that I never saw coming. Outstanding

Not Good At All

Far too long. Annoyingly correct and plummy English narrator spoiled it for me. Not good

What we lost in translation is found in revenge.


A very interesting book that explores many aspects of human nature, and the meaning of serving within an organization or a society that demands subservience to superiors and devalues individuality, topics that are expressed sometimes with great eloquence others with mixed success because of the demands of the story line.

The main character is bullied and ostracised in a manner that I think most western organizations would not tolerate, he is always conflicted with his duty and his personal needs and putting those needs in the background for the greater good, for a second we see him strive for a modicum of individuality but is soon stifled and put in his place.

The thriller part of the story is well developed and very interesting but stretched out for too long because of the existential angst of the main character.

A good police story with a clouded moral message that I think was lost in translation.

The reading is given in a monotone that is a bit disconcerting given all the passions in the story.

Struggled to get into it

Its read very, very slowly so first impression is that its boring. Just couldn't get in to it

The storyline itself, once untangled from all the fluff and the personal and political crisis of the man in character , was interesting and well thought out. But it gets lost amongst endless interpersonal conflict, and drawn out questions about the police as an institution.

Basically it's far, far to long. But the most frustrating part was having a bland narrator, with pompous interpretations of the characters voice with little consideration of the cultural nuances of the characters and structure. Why some of these characters sounded in part like Only Fools and Horses/ The Sweeny- I'll never understand. If this has been read by a person with an accent and understanding appropriate I would have enjoyed it far more.

If you could sum up Six Four in three words, what would they be?

It was hard at first to get all the characters names because they were Japanese.But the story was one not to put down. You wanted to know what was going to happen next. Being a true story and asking my Japanese Pen Friends it is really a big book and film. I would love to see the film too.

I loved the detective who had been given a new roll as the Press Director. The character is great all the way through the book.

I enjoyed the ending but will not say what happens. But it is not what you expect.

Yes the problems the Press Director went through with father of the kidnapped daughter and the problems he had with his own daughter.

It is hard work but worth the read. You will get into the characters and remember the names.

If you could sum up Six Four in three words, what would they be?

Mikami, whose decency and honour shone

I felt happier at the end

It's dreadfully slow and I nearly gave up, but if you can hang on through the relentless tedium in the first half, the story is suddenly intriguing and then more stuff happens and I found it hypnotic. I'm so glad I stuck with it.

I couldn't finish this I'm ashamed to say. Could be the cultural differences but I found it hard to get into the mindset and get emotionally involved with the characters. I got really fed up of the political stuff as it felt very repetitive. I also struggled with keeping track of who was who, however that could easily be down to the fact that I am unfamiliar with the style of names.

I wasn't to sure if this was for me but after only a short spell I was intrigued and interested until the end. Will read again I expect

Every chapter was like a marathon far to long . Most boating book ever. This one will be going back .m

This book appeared to be right up my alley! Love Japanese stories, usually they are fast paced and excitingly dark! This one is ponderous, far too much musing and supposingl. I've walked away at the 3/4 point, I just can't take any more. The reader was good, the story is bogged down in detail which ultimately leads nowhere. I've stopped caring whether the daughter turns up of not!

Slow and not particularly satisfying

A meandering story that lacks a sense of purpose. Not particularly satisfying in any way. I was quite dissapointed.

This was the longest book I have listened to so far, and expected to get lost. But due to the clear narration and the skillful writing I could follow it all.

A ‘slow’ novel - one which doesn’t depend on thrills or narrative twists to carry it through. Rather the development of the parallel strands finally comes together in a surprising climax. Detective work, office politics, cultural expectations beautifully explored.

Just brilliant. Very detailed but fascinating- particularly in regards to Japanese culture. A brilliant book well worth the effort.