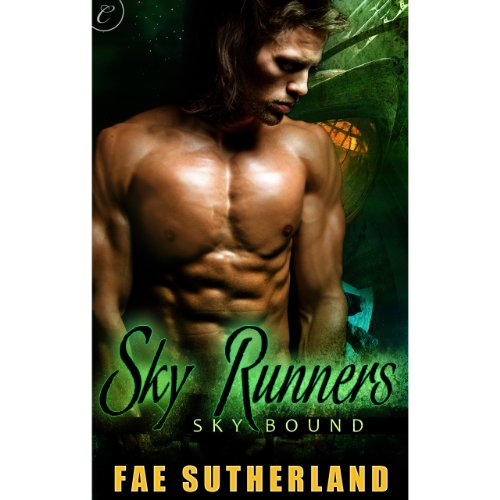 Crux Ansata second-in-command Killian O'Neal has a plan. The governor's son, Neith, has been enslaved in a high-end brothel. Killian's going to break him out, take him home and collect a reward. It's a daring mercenary rescue. What could go wrong?

A lot, as it turns out. The governor doesn't want his son back, the ship and crew are on the run from the slavers, and Neith is in withdrawal from a drug that instills in him a desperate lust.

A passionate heat flares between Killian and Neith - but is it just the effects of the drugs still in Neith's system, or could it be something more permanent? They both need time to figure out if what they have is real - but Neith has taken a valuable item from his old masters and they're not going to let him go easily. When the slavers catch up with the Ansata, Killian will have to choose between the safety of his ship and its crew, or life with the man he's falling in love with.

I actually returned book 1, then went back and bought it again and gave book 1 another try after listening to book 2 all the way through... Book 1 was actually really good. I guess I was super distracted the first time. I am so glad I gave it another try. This one was even better than book 1. Great sequal. Jack LeFleur is a really good narrator. I like the voices he used in this series because he just continues from book 1. Cookie, Jared Torrin and every all have the same voices from book 1, so I felt like I knew all the characters right away just from their voices. Great Great Job!

This is a sweet, fun, uncomplicated story with a great narration. 3.5 stars for the story and 5 for the narrator, Jack Le Fleur. He can take a mediocre story and bring it to a new level. I didn't read/listen to the first book, but didn't think it affected my enjoyment of the story at all.

Better Than the first

I liked the first Novel in this series but didnt Think it was anything special. So i didnt have great expectations for this one. But i accually liked the story better Than the first even if "cookie" was a Nothing-character in the first book and is one of the MCs in this one. The story seems better thought-though and the characters more human. Still, i like jared best in this book too - just as the in the first, and i hope the last book (with jared as MC) will be even better. You could read it alone i surpose, but the triology is three connected stories and helps Build up the characters. So - in summery - nothing absolutely devine about this story but still good enough for a listen. Narrator still good - but he is also one of the best in my opinion, so he adds to the story, as he always does.

Book 2 of the series and I enjoyed following the characters first met in Book 1. Another outstanding performance from narrator, Jack Lefleur, one of my most favourite narrators.

The listening of book 1 may not be mandatory to listen to this book 2 but it's not a bad idea. Both of these characters are introduced to us in the first one but not too much.

Killian aka Cookie is just a wonderful guy who through his friendship with Captain Torin is part of the crew on the ship that seems to look for trouble. This latest mission has Killian going into rescue someone who it turns out can complicate the lives of the entire crew.

Neath is the kind of man who may need rescuing. He gets caught up in a world many don't even knows exist. Killian is just what he needs but he doesn't know if his needs are real or affects of the drugs. They manage to muddle thru it just fine and throw some steamy sex in there as well.

Jack LeFleur our narrators just brings life to his characters you can tell which character you are listening to. Another great job for him.

Love this series and could seriously listen to Jack LeFleur read the phone book. His narration is flawless and his voice is just downright sexy! Highly recommend.