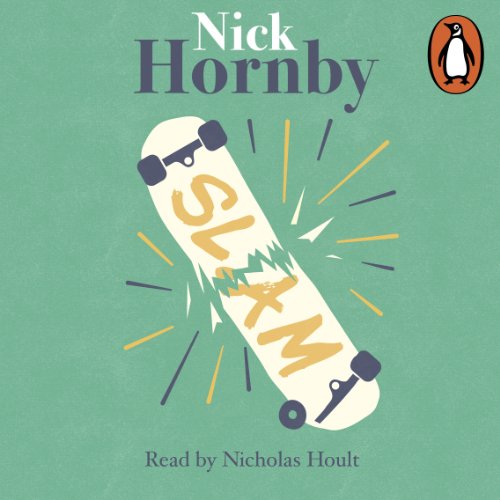 The unabridged, downloadable audiobook edition of Nick Hornby's hilarious coming-of-age novel Slam, read by Nicholas Hoult, star of the films About a Boy and Warm Bodies, as well as Channel 4's Skins.

'There was this time when everything seemed to have come together. And so obviously it was time to go and screw it all up.'

Sam is sixteen and a skater. Just so there are no terrible misunderstandings: skating = skateboarding. There's no ice. Life is ticking along nicely for Sam; his Mum's got rid of her rubbish boyfriend, he's thinking about college and he's met someone. Alicia.

Then a little accident happens. One with big consequences for someone just finding his way in life. Sam can't run (let alone skate) away from this one. He's a boy facing a man's problems and the question is - has he got what it takes to confront them?

Slam, from the acclaimed author of About a Boy and High Fidelity is a teenage novel about a boy who has to grow up in big, big hurry. It is The Catcher in the Rye for the 21st century.

"Hornby is a writer who dares to be witty, intelligent and emotionally generous at once." ( New York Times)
"He should write for England." ( Observer)
"Very funny...very real" ( Daily Telegraph)
"Hornby gets his point across with the subtlety and skill of a born novelist who always deserves to be read" ( Independent)
"A moving read for anyone" ( Elle)

This is neither an advice book for teenagers nor a story with an interesting narrative. the characters are predictable and deadly boring

What could Nick Hornby have done to make this a more enjoyable book for you?

Would you listen to another book narrated by Nicholas Hoult?

yes he is very good

Much better than I expected!

I dismissed this book when it first came out because I thought (from the blurb) that it was just a book about skateboarding, but it's really about teen pregnancy. I really got into it and listened to it in one 6-hour sitting. I could relate to Sam, even though I'm 35 (older than his mother!) and really enjoyed the 'magical' element to the story as well. The narrator did a pretty good job, but I did have to speed him up a bit as he had the habit of pausing too long between sentences, particularly during conversations. Speeding him up didn't help much to be honest because the gaps just made it sound very choppy, but I got over it as time went on and I got into the story.

this is not my usual kind of book genre but I got on sale and absolutely loved it.
would recommend this book and the narrator did a great job too.

I enjoyed listening to this book, though I did find it slightly trite at times. I have enjoyed others more.

Be careful what you wish for...

I got this book because it was deal of the day and didn't even bother to read the summary. As the story unfolded I found myself pulled in because it felt like my story, only I have a magic 8 ball and not Tony Hawks. He wanted he and he got to be with her but never thought it'd turn out like that. What do you do when you have a plan and it all changes? Thinking about options and seeing what your future will be. Trying to hide from it and trying to cope and adjust. The path is already written we just didn't know it...

Nick Hornby entry into into the YA book market. Its the story of Sam a skating/Tony Hawks obsessed London teen whose life is changed when he meets the gorgeous Alicia.

Its a slight tale that's been told a hundred times before but Hornby throws a quirky time travel spin in to the story.

The audiobook is narrated in an engaging way by Nicholas Hoult (the boy star of the film of Hornby's About a Boy) who gets across the confusion of a teen facing life changing circumstances (and time travel!) well.

Not Hornby's best work but a great way to pass a few hours.

I got this through the daily deals, without knowing anything about it, and not having read Hornby for years, and when it started I discovered it was a 'teen' novel my heart sank, but it was read well and the story flowed at a pleasant pace and the book was finished in days, this from a 49 year old! Not a classic, but worth a go.

excellently read by perfectly cast Nicholas Hoult, this is a gently amusing family saga with genuinely likeable characters and a wry realism that results to a satisfiying listen.

A good story well told about a really likeable young man and the way he deals with what life serves up!

First time listening/ reading anything by Nick Hornby and the storyline wouldn't normally be my thing at all, I got this as a daily deal title and have been very pleasantly surprised! I really enjoyed it , so much so I will be looking for another by him!

Best book I have ever listened to.