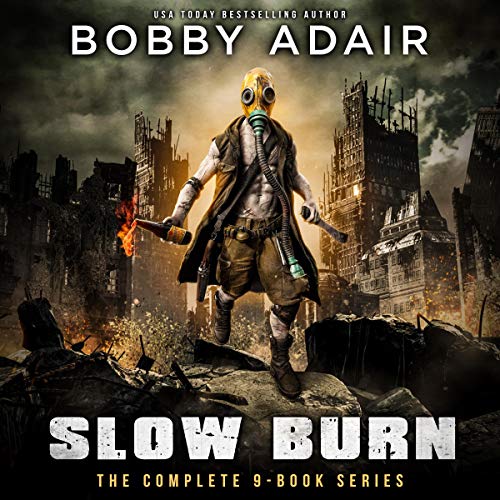 It was just a random mutation - one of a billion that happen in viruses every day. But this one was different. It exploded out of Somalia and spread across the oceans before anybody thought to look up from their cell phones to see what was going on.

The infected breathed the virus into the air around them, spreading it through the cities faster than anyone thought possible. Hospitals were overwhelmed. Police lines crumbled. Quarantine sites disintegrated. Cities started to collapse.

Through the chaos, some, like Zed Zane, discovered the virus wasn't going to kill them, but change them. Change them into something different, and leave them in a world where the word "survival" took on an older, more brutal meaning.

just a few things that just rub the wrong way.
This is coming from my point of view as a Retired Marine.
1. When narrators screw up Military terms and names of gear. examples; MOLLE it is pronounced as MAUL-EE not mol- lay.
when saying names of weapons or vehicles
military personnel say MRAP like it spelt as a word not M R A P as in separate letters. that goes for all vehicles just as when some one says HMMWV as humvee. when it comes to numbers on weapons or ammunition the number is said as a whole number not individual numbers ie M240G machine gun is said as MtwofortynineGolf. with ammunition 5.56mm is not said 5 point 5 6 its five five six or seven six two.
last thing FOB is not said as F O B its pronounced as spelled FOB ( fahhb ).
Basically if you are writing or Narrating any type of military terms research ow the military actually says it, it will immerse the reader or listener more in the story.

this has to be one of the best deals on audible right now, 9 books and it never got repetitive, the characters were great and the story always fresh and exciting, I can't recommend this enough, the narrator was absolutely awesome as well.

Give it a chance

I got this set because Phil Thron gave a heads-up about it on Twitter, and I’m a big fan of Phil Thron. I really enjoyed this story. Good main characters, lots of action, and good storyline. Take a chance and enjoy.

a must not pass up series

read it before it was awesome. listened to it and it still is awesome. Phil Thron knocked it out ths park. cant wait for book 10. ima name it for me( return of null spot). lol

A must have Just as good the second time around .

I read a review that compared this to zombie fallout. I read these books before zombie fallout and found them to be more accurate as far as weapons / vehicle names which I pointed out to the author of ZF but that was my only complaint of that series . Which is ok I like both series in their own right. I used to be stationed at ft hood texas 60 miles or so from Austin. So everything about this book was visually referenced . Down to the water station right at the corner of the airfield on ft good I just found these books to be so good! Other than the improper pronunciation of molle often referred to as Molly or a Flick everything else was solid . It was just all around heartwarming. And interesting to see the characters transformation. I believe zombie fallout got more press because of mark tufos unique protagonist . But for one credit it is a must have. Not totally unrealistic in the tactical sense . How they blend in is cool .I honestly hope this book has its second coming and makes this dude a lot of money. I think he deserves it. I always like when characters move past and never consider race as an issue as well . Just brotherhood forged in survival. Next I hope mark Tufo comes out with boxed set as I lost track of those after I thought it ended moving onto the werewolf saga. Both are essential reads for sci-fi apocalypse sagas .

love these characters and Murphy especially. The different direction taken with the infected was great and refreshing as far as post apocalyptic viruses go.

One of the greatest “zombie” books

I was slow to get into this but let me tell you. I loved it. Bobby Adair knocked this series out of the park and Phil Thron did an incredible job on the narration. Look...50 hours of this series in a box set is probably the best value on audible and you would be crazy to not get this. I wish there was more, but it ended right where it should have. Perfect pacing, fun action sequences, suspenseful moments, the tug of the heart and the existential dread worked in concert with every scene.

It should be noted that I RARELY write reviews but I absolutely had to rave about this series. Thanks Bobby and Phil for 50 hours that I thoroughly enjoyed.

I have read and listened to untold numbers of post apocalyptic novels. This is BY FAR the GREATEST OF ALL TIME!!!. Bobby Adair is the bomb and he truly captured and unleashed the characters of Zed Zain "Null Spot the Destroyer" and the "Mighty Murphy" Smalls on the naked bald horde. The depth of his characters and his ability to weave a fascinating tale of horror and delight all on the same page. I will keep this tale and go back to it often. The detail that he goes to is amazing as well.

Then the Narration by Phil Thron is out of this world. He brought the pages to life and pulled me into the action.

Fabulously written. Loved the descriptions, witty and realistic dialogue and fully dimensioned characters. He breathes new life into a tired genre. Pair this with the always impressive Phil Thron and you've got a real winner.

Definitely worth the money!

I was bored one day a few years ago. Decided to have a look at what free books are available on the kindle store and I found Slow Burn book 1. I didn’t really expect much from it as it was free but I read it from start to finish in one go. I then bought the next one and pretty much did the same. Now I own the the collection with quite a few duplicate copies as some were included in box sets. Still, it’s definitely worth the money. Zed and Murphy are great characters and I can’t wait for book 10. Bobby Adair has released some really good series of books and I’d recommend them all. Being able to listen to my favourite series whilst I’m driving for work or laying in bed being lazy is just perfect and the guy doing the narration is quite comical at times with his voices. BUY THIS, you won’t regret it! Thank you Bobby!

Loved this. Well written and good story arc. Few surprises on the way and plenty of action. So glad book 10 is on its way

Managed to listen to the whole thing to 2 weeks, just couldn’t stop. A bit lost now it’s ended.
Great narration by Phil Thron as always, and as you can tell really enjoyed the story.
So worth 1 credit, I would of happily paid more. If your sitting on the fence, just get it.

I couldn't put this down I listened from the first book to the very last. My favourite so far of any apocolypse series

I really liked the story, lots of unexpected twists.
the books where a little shorter than I would have liked but I was hooked from the start.

I loved it, it was the best box set I've listened to for a long time

I really enjoyed this boxset, the narrator was excellent and very believable with his character voices. I couldn't put the book down. I highly recommend it

Phil Thron at his best, great story which I couldn't stop listening too. lots of action, well recommend!!

I’ve listened to hundreds of books and I usually only listen to trilogies or more. To get 9 books with one credit of THIS quality is too much! So well written, well paced, great characters, 5 stars all round.

Thank you so much, can’t wait to pick up your next series. Again 1 credit for 6 books!

Awesome series. Worth more than 1 credt for sure.

Awesome series. Worth more than 1 credt for sure great story and easy to follow.

I have 117 book in my Audible library this is in my top 5. It was great. The main character is a dip shit most people his age are. Great supporting cast. Well worth a read/listen
Phil Thron was great too.
All round great time had
Cheers mate keep it up.

What a journey. Great listen

I'm going to miss listening to this story. Quite a compelling listen. Really worth the investment

seriously, do it. this is a great series. I feel empty now it's finished.

at first I was irritated by the short chapters, but I think it's what made this such an easy listen. the story is constantly moving, characters and voices are consistent.

I got totally sucked into this series.

What the f@#k...
This was a epic ride. From the beginning it was action packed, sweaty palmed savagery. The only thing lacking is the fact that it ended.
So don't be a Russell and stand there.
You must check this series out.

this 9 book set is a real pleasure to listen to. I had the intention of listening until I needed a break and then coming back to it, but I listened the to the whole book without stopping and I would do it again !!

really recommend for anyone interested in zombies and the apocalypses setting

I loved it, invested me in the characters and the story. narrator did a good job
as well

Best series of my collection..
Zed is the man.
A bad arse of a zombie killer.

Like others, the first few minutes I was unsure. The narrator seemed wrong for the character and I wasn’t sure it was a story for my. By the time I had finished the first chapter I was hooked! I have binge listened-read this because I couldn’t stop! I’ve juggled the audible with the kindle just to not stop the story going. So, so good!