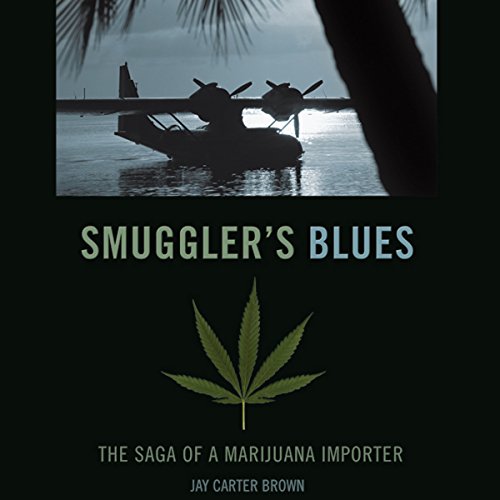 Told from the viewpoint of an impressionable young entrepreneur named Jay Carter Brown, this memoir quickly dives into the gritty underbelly of the international drug trade. The story begins with minor-league smuggling scams between Canada and the Caribbean that soon escalate to multi-ton shipments of grass and hash from the Caribbean and the Middle East. All goes well for a time, but as the stakes grow higher, inevitable setbacks occur. Drug-runners, police, jealous friends, and rival gangs all contribute to this extraordinary story of a young man who became involved at the highest levels of the drug trade and lived to tell about it.

What listeners say about Smuggler's Blues

Had to stop reading.

after about 1 hour I gave up listening. the narrator is the main problem, as he obnoxiously "ssss's" after every word that ends with an S. it'll drive you crazy or at the very least annoy the hell out of you, I promise. in addition, he talks too close to the mic. it kinda makes me wonder why no one did a test run on the mic???

Great story, and Narrator was phenomenal! Couldn't stop listening and while I'm on the right side of the law, the real life account definitely sang a siren's song of money and good living. The epilogue, however... Seemed kind of , well, without ruining it... It's easy for him to say what he says when he was worth millions. Anyway, highly recommend this title whether you are clean like me or into the trade.

What disappointed you about Smuggler's Blues?

I often look past bad pronunciation in audio books because typically it doesn't bother me - but perhaps that's because I'm Canadian, and when they apply to the US - particularly some US figures - I'm not as familiar with them and I can let them fly; but in this case I couldn't. While the narrator was acceptable in his story-telling, his pronunciation of Canadian names - particularly those around Quebec ( a hard "a" in autostade, or worse, a hard T in Laurentians, were just two examples) - was so appalling that it was a distraction - exacerbated because place names were so central in the opening parts of the book. After 45 minutes I had to stop as he bastardized every place name he mentioned. This is unfortunate because it seemed like a good story - and it's unfortunate that this doesn't come out in the audio preview. In this case, poor pronunciation was a practice that I couldn't put up with for very long; but, like me with other audio books, perhaps others who are less familiar with the names won't be as affected by the narration, and can listen to what is likely a decent yarn.

I'm not sure what benchmarks Audible uses in selecting narrators, but given that the narration of a book is so central to the enjoyment one derives, and the frequency with which one ends an audiobook prematurely due to bad narration, I really think this is something Amazon/Audible need to invest more time in reviewing before selecting a narrator - because surely their standards on narration cannot be that far off the average listener on Audible. . . yet from the number of reviews that reference "poor narration", it would seem that they set the bar pretty.

Very entertaining and I learned a couple of things

I think for every curious mind out there it will be exciting to learn about the world the author describes. It is indeed a very interesting story. While not exactly linear, what I really enjoyed was the insight into all those different kinds of criminals that are out there, how they think and cooperate with each other. And, of course, the action of the operations itself is quite exciting too.

Not only will you enjoy the story in this book, but you'll also get a couple of good insights and life advice as well. Would recommend to anyone.

This is not a story in the conventional sense but simply a collection of anecdotes, each chapter apparently focusing on a new assembly of characters. There appears to be new storyline or character development and listening became pretty tiring after a while (so I never did finish the story). Like sitting at a bar with some guy who insists on telling one pointless story after another.

Pretty Good Book. Worth the Listen