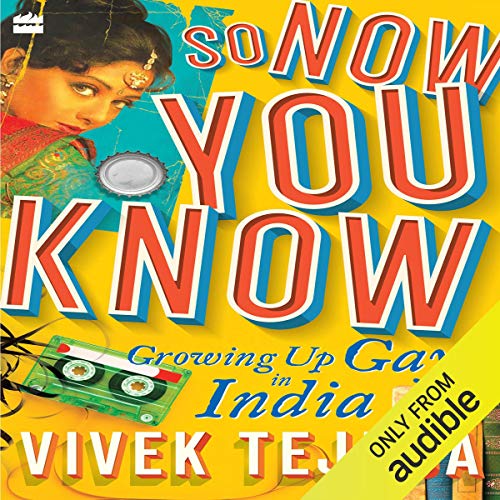 So Now You Know

The year was 1991. Vivek was eight. He realized he was gay. Only he didn't: he just figured that he wanted to be different. And that he was in love - for want of a better word - with Deepak, his best friend.

Then Mast Kalandar released, with Anupam Kher playing Pinku, a stereotypical gay character. And Vivek realized he didn't want to be Pinku. So he tried to walk differently, gesticulate differently, and speak in as gruff a voice as he could - all to avoid being Pinku.

Funny, poignant, heartwarming and heart-breaking all at once, this is a memoir of growing up gay in India in the 1990s, with Bollywood, books and the Bombay sea for company.

What listeners say about So Now You Know

Such a lovely book!

Vivek Tejuja take a bow! You are a gifted writer and have so beautifully crafted this book. I Enjoyed reading it thoroughly. Thanks for sharing the insights about your life and sharing the mind-space, it helped me understand a lot of things and will sure apply the info to change my approach in life .
One just can’t imagine the kind of struggles other ppl are facing in this unfair world but I can so relate to many instances in my life. We all can be better and inclusive.
Much love.
And,
Vivek Madan you did an amazing job of reading this book wonderfully with right emotions, and sounded so much like the author.