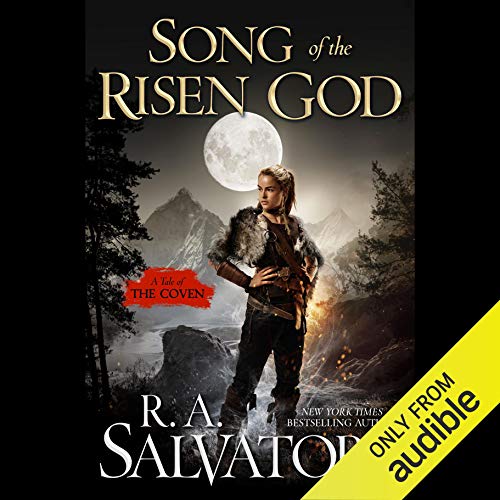 Song of the Risen God

Song of the Risen God is the climatic conclusion to the thrilling Coven Trilogy from New York Times best-selling author, R. A. Salvatore.

The once forgotten Xoconai empire has declared war upon the humans west of the mountains, and their first target are the people of Loch Beag. Lead by the peerless general, Tzatzini, all that stands in the way of the God Emperor's grasp of power is Aoelyn, Talmadge, and their few remaining allies.

But not all hope is lost. Far away from Fireach Speuer, an ancient tomb is uncovered by Brother Thaddeus of the Abellican Church. Within it is the power to stop the onslaught of coming empire and, possibly, reshape the very world itself.

Waste of a excellent character!

Can't write more without spoiling it all but my god Rob you wasted one of the best characters in a long time in your stories. Then after the death you write it off as if nothing happened. Besides that the story just felt rushed in order to end the series.

As expected, Aoelyn is ultimately victorious but not before many human cities both large and small are torn asunder. [snort-snicker]It's a good thing that humans in this world breed like rabbits since they seem to replenished their ranks and repair their cities within one generation of each large-scale destruction.[/snort-snicker]

Aydrian finally achieves his long sought-after atonement for his past villainy but at terrible cost.

Regrettably, R. A. Salvatore had constructed a story that has been a trend with other SciFi authors that I find actually detracts from the enjoyment of the novel. That being, framing most female characters as great leaders and warriors, supreme to even the men under their charge. Yes, there were some men in leadership roles but their roles were mostly of a support nature and most of those meet an untimely and, uh, shall I say, unpleasant ending. I don't mind and even enjoy books having strong female leads and secondary characters but a bit more balance is needed.

[SPOILER] wth!? even Mairen, the female Coven leader, who was responsible for untold treachery and cruelty toward Aoelyn, her aunt and the lake people somehow gets a pass in the end and continues in her leadership role.[/SPOILER]

While this book clearly end the Coven trilogy, there is a seed planted for a new hero being nurtured.

This book had a lot of the typical tempo and drama of a Salvatore book. This book kept me interested throughout. The trilogy as a whole was good in that if you never read the rest of the series in this world it’s not a problem but if you have it’s that much more rewarding. Plenty of nods to past events for long time readers I will say, having read nearly 50 of Salvatores books over the last 25 years this trilogy might be the darkest in ways. I don’t think in a bad way but is different for sure. Hoping he comes back to this world he has built. There is so much potential but he left it in just a way this could be the conclusion of the world. But with just enough of a pleasant twist at the end to leave the door cracked. Definitely worth the read.

Oh so much to say, this book is
Rich with story telling so you won’t hate it. But I am very disappointed with the end of this book! Like the last 3-4 hrs felt very very rushed I’m also saddened that Adrian died abruptly, There was Still so much that could have been done with Adrian’s character! I at least hope the author finds a way to bring Adrian back into the loop. but what really made me angry was the fact Adrian fought off this dragon to finally go limp in the dragons mouth. (Probably means he’s dead) but then that’s it! You don’t hear about him again!! Not even a burial or anything.. wtf. Very disrespectful to his character.