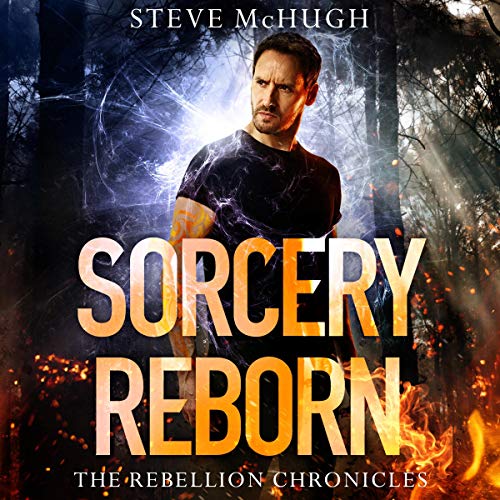 He doesn’t need a weapon. He is the weapon.

After losing his powers in an epic battle between good and evil, former sorcerer Nate Garrett finds himself living as a humble human in Clockwork, Oregon. While the world thinks Nate is dead, his friends continue to fight against Avalon and the evil it’s intent on spreading.

Avalon’s forces turn up in Clockwork, and Nate’s frustration grows with every passing day his magic doesn’t return. He finds himself trying to stop Avalon’s plans while hiding from enemies who would destroy everything in their path to see him dead.

Avalon’s darkness begins to threaten the people Nate cares about, and an old nemesis returns; magic or no magic, he has no choice but to fight. But will Nate see his magical powers reborn before the entire town - and everyone he loves - is destroyed?

What listeners say about Sorcery Reborn

good story with a 50% great performance

I hate the lady reading Layla's part so much it takes me out of the story. the over dramatic reading ruins it for me. "Layla walked in the room and TURNED ON THE LIGHT!"

Not first in series

I wish I'd known this wasn't actually the first book in the series before getting into it..
While listening to this Audible the whole time I felt like I missed something... the description says it's book 1, but there is actually a bunch of books that came before.
As far as the story - it's not bad, but not great. Somewhat predictable, lots of contradictions and gaps, and the characters' dialogue feels like it was written by someone who has only been exposed to second rate porn storylines. Also, the way the first person narrative is written is as if the narrator is unaware of what he's about to do, which is a bit annoying.
But, the book is still pretty entertaining. The Audible narration is pretty good.

NOT WORTH MY TIME

The Wheel of Time series succeeded with multiple narrators because the author wrote in the same voice, The Rebellion Chronicles feels like two different writers and they styles do not compliment each other. I find myself skipping chapters because I just hate the book.

This book carries on in this world created for us to laugh and cry with the characters. McHugh does an amazing job immersing his readers into this urban fantasy. I would recommend anyone whose read any of his other books to pick this up and see what happens when you piss a sorcerer off!

The female narrator is terrible

The book would have been far more enjoyable if all narrated by the male voice, he is great. The female narrator sounds like my mom trying to act out Disney books, too dramatic and breathy. I couldn’t stand the chapters with Layla simply because the narrator was so horrible, put me to sleep many times.

I loved this story and can't wait for the next one in the series. I thoroughly enjoyed the play on mythology.

If you haven't started the Helliquin books, go there first!
Best take on world mythology. Seriously. Nate and crew are amazing. My only complaint is waiting for the next damn book!

Good book. Enjoy the series. Simon is continuing to do a great job. Starting to enjoy Elizabeth narration.

i just looove me some Nate Garrett!!

this was the best book in the series so far and one of The best books Ever! you will flip ur switch at the end! the next book isn’t out til the end of next month tho ... sad face cause just, More! Plz!!

Loved the first book in this series and have been hooked since. Great story and characters. cnat wait till the next one comes out. A must read series.

Just awesome! Well worth the wait since the last in the series and I cannot wait for the next installment.

The story telling consisted of nothing more than "he said ....." and she replied "......" etc. There was no scene setting, no descriptive text that lets your imagination run wild. Overall it came across like it has been written by a junior school child. Other than a slightly imaginative twist on the different Gods and how they're intertwined it really lacked imagination.

I loves this book its brilliant I would read any book this man writes !

Twist on the familiar

Thank you Mr McHugh, once again an amazing book. I’ve nothing negative to say I love both Nate and Layla ( although not as much) and I absolutely adore Remy and the rest of the “Rebellion “. Can’t wait for the next books. Roll on February.
Again a really fabulous book and I thank you for the escapism it supplies. Thank you 🙏🏻

He’s back and he’s powerful

This is a fantastic continuation of a brilliant series. Worth a few reads definitely recommend this author to anyone

Keeps the action (and friendships) going

The parallel narration works nicely with our 2 lead heroes and their teams. I liked the ending with its promise of excitement to come.

Did not like this as much as earlier books

Having 2 narrators is a mistake....makes it more difficult to follow, plus not the best of female narrators !!!
Story was ok but not as strong as earlier Hellequin books.

Blown away yet again!!

What a follow up to an amazing series!! Literally jumping straight into the next one.

The one gripe I have is Leila Cassidys narrator, she struggles to do any accents but herself and is what I believe truly bad casting.

It just got worse

I kept hoping it would get better. Puerile characters, achingly bad dialogue. Don’t bother with this one.

Oh wow how do I hate her performance. It doesn’t match Steve’s writing style nor the other narrator. It’s cringeworthy and I’m ready to skip to Nate’s parts only and find the ebook to catch up on what “Layla” parts I miss...
Ugh! Thoroughly turned off. Her voice would suit a Jane Austen or Dickens book perfectly. But not a Steve McHugh.
Oh and the guy doing Nate’s part falls far from the excellence we’ve loved from James Langton... and his inability in previous books to get names right and the whiny teenage quality he gives to Nate vs the gravitas and grit he gives Mordred drove me quite mad. Have you noticed sometimes you can’t tell Nate from another female character until you hear “said Nate” 🙄 so annoying. Yet this female reading?... way way worse. 🤦🏽‍♀️

Omg I’ve been waiting for Nate to come back. Nate is back with his usual ar*e kicking flare and dark sarcastic humor. I’ve missed him so much.