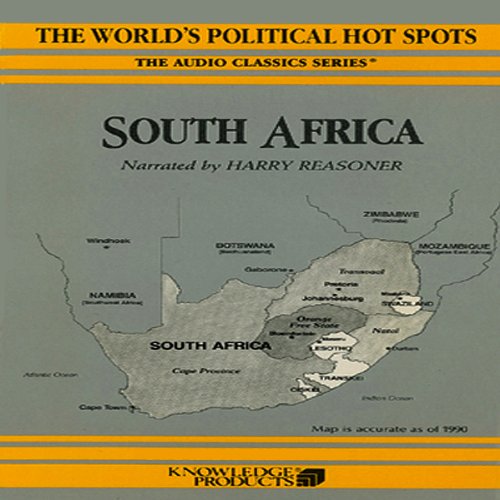 Before blacks were enfranchised in the 1990s, South Africa was the world's symbol of racism. From the moment the Dutch colonists set foot on the Cape in 1652, this nation steered a straight course toward apartheid, resulting in consistent civil unrest. This presentation explores the economic and social forces that brought South Africa's troubles into the international spotlight.

The World's Political Hot Spots series explains the basis of conflicts in some of the world's most politically sensitive areas. Many of these regions are in today's headlines, and tensions have recently become violent in many of them. Each presentation covers up to 10 centuries of background, revealing how and why today's problems occur.

Edited by Wendy McElroy and produced by Pat Childs.

The author makes many assumptions which have not been properly researched, for example:

* "... In 1962, Nelson Mandela, a leader of the band African National Congress, was on trial because he had left the country without permission..." If the author had done proper research he would have found that Nelson Mandela was indeed on trial, but NOT because he left the country without permission. He fled the country because he was wanted by the police for instigating industrial strikes -- a well documented fact that would have been found with the smallest amount of research. In any country in the world, if you or I or any reader instigates industrial strikes costing his home country many millions in lost wages, lost production, lost jobs and lost taxes, and then flees his home country, would the governemnt of that country not prosecute that person, regardless of skin colour?

* "...From the moment the Dutch colonists set foot on the Cape in 1652, this nation steered a straight course toward apartheid..." Letters of sailors and diaries of many ships' captains, the most famous being the "Scheepsjournael ende Daghregister" (ship's journal and diary) of Jan van Riebeeck, document the fact that the Cape of Good Hope was uninhabited wilderness when the Dutch settled there in 1652. After setting foot on the Cape of Good Hope, it was many days before they met some wanderers of the Khoi-Khoi and Khoi-San (Bushmen) -- these were wanderers and were not displaced from the land by the Dutch, because they did not inhabit it on a permanent basis. The Dutch later imported slaves from Malaysia because there was no local population to enslave. The Dutch established he first trading post to supply fresh fruit and food supplies to the benefit of all seafaring nations on the trading route to India. These facts are easy to find, had the author taken even the slightest trouble to do any unbiased research.