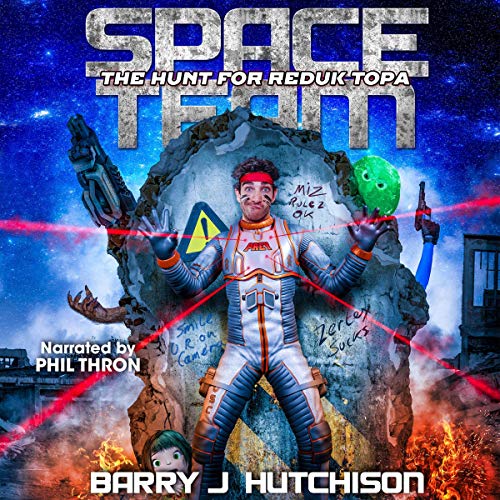 Featuring unexpected stabbings, maniacal puppets, and a dog with a head like a testicle, Space Team: The Hunt for Reduk Topa is the 12th book in the Space Team series, and the perfect jumping on point for new listeners.

Sick of the stress, aggravation, and multiple genocides they've had to put up with lately, accidental space hero Cal Carver and his crew set off to start a new life in a distant corner of the galaxy.

Six tedious days of warp-speed and board games later, they arrive in a sector filled with new hope, new opportunities, and new adventures. Too broke to take advantage of any of these things, they are forced to accept a series of increasingly demeaning jobs just to make ends meet.

When one such job leads them to the offices of a sector-wide TV network, Cal signs-up to star in smash-hit game show The Hunt, confident of winning the big cash prize.

What he fails to realize is that the show's premise involves him being chased and killed for the amusement of the viewing public and so Cal must run, fight, and occasionally beg for his life as he attempts to win the game, the money, and his freedom.

But in the entire history of the show, no competitor has ever survived The Hunt, and the network will stop at nothing to keep that record intact....

Space Team: The Hunt for Reduk Topa is the 12th book in the internationally best-selling series from award-winning author Barry J. Hutchison and perfect for fans of Guardians of the Galaxy, The Hitchhiker's Guide to the Galaxy, and The Golden Girls.

What listeners say about Space Team

I love this series. Barry is hilarious and Phil Thron is the absolute best narrator.!
the bloopers make me cry.

Another great adventure from Cal & the gang.

My favorite moment:
When they come upon the little lawn gnome people and Miz says they look, "Delicious."

I think Phil Thron's outtakes are wonderful! What a great idea. And my new favorite way to end a book. 🤣

I immediately related to the main character Cal, he is a perfect smart ass that is also somehow endearing. These books are mostly on the lighter side but have their moments of sadness and loss that really bring the storyline home. Great performance by Phil Thron, he has quickly become one of my favorite narrators.

They just get better each time.

There is no dip in this series. They are all home runs. This one doesn't disappoint. Phil Thron is a master on this series and quickly has shot into my top 5 narrators.

Hilariously funny, uproariously irreverent, and super enjoyable. Unlike most series that tend to taper off after 3-4 installments, the Space Team series just keeps getting better and better. I remember thinking, “where could he be going with this,” with Splurt nearly six books ago and then he went through and explained all the Splurt stuff and still managed to make the little bamston one of the best characters in the series. “Redunk Topa,” a clever play on “The Hunt for Red October,” cleverly plays off of the plot of “The Running Man” (or the SPACE Running Man). It’s a story you’ve heard before, but never with this level of sass and backtalk. You’ll want to wash the books mouth out with soap and spank it for being so naughty. Just buy it. It’s awesome.

I love this series and it has yet to disappoint. very funny, some great twists, and Phil Thron gives another awesome performance

What a fun ride!

I love this series! Barry just keeps coming up with new antics for the team. Phil Thron and his many voices is great. The “voice bloopers” at the end are priceless... wish there was video clip... (listening Phil?). Keep bringing it Barry!

Never almost shot my drink through my nose from laughter so many times.

Yep. Never almost shot my drink through my nose from laughter so many times. Just do it.

Cal has found his fair share of trouble this time! The crew of the Currently Untitled embark on their most hilarious adventure yet.

The book is hilarious and I love the blooper reel at the end. I would probably buy an audio book of Phil's bloopers.

Wish I would end now

After 12 books the jokes are becoming the same, with a few new moments every now and then.
It's just now got to the point where he's taking done before ideas and just doing that as a book. It's become a TV series with episodes that have no progression on the main story.

enjoyment at its best

I cannot express enough how good this whole series is. Narrator is superb, stories are wonderful and very funny, can't wait for the next instalment

I've listened to all the books in the series and felt this one took way long to get to the meat of the story. When we finally got to Reduk, my Alexa announced there was approx 4 hours left in the book. 7 hours of messing about with no real purpose and then a fairly swift ending.

This is fine if you take the book as a sort of slapstick comedy, but I like a good story to go with it, and I felt the first 3/4 of the book was just comedy and no story.

Don't get me wrong, if you are a fan of the series you'll enjoy it, as I did, but it felt like a bit of a con. I honestly can't remember what went on in the first 7 hours. That isn't great.

Phil Thron is masterful as always - what a tallented narrator.

This one was SO funny! Good work Barry - love you Phil! Cant wait for the next.

You will laugh out loud, then when you hear the out takes you’ll laugh again.... brilliant

When you get a brilliant writer with more wit than a sewer has shite and the aroma of smells that the brain comes alive with in its thoughts and pics. Then you get the skill of a narrative bringing it all together WOW. Barry and Phil I thank you, you are
A massive breath of fresh air during these troubled times.😉

Yet again a wonderfully silly space romp, characters are all really well thought out, the plot is marvellously ridiculous and the jokes spot on. Phil Thron is the perfect, PERFECT narrator. Absolutely brilliant, cannot recommend this series enough :)

Its Just so good

one of the best series out there. start at book 1 laugh your way through.....and don't spare the space horses.

Author, Barry J. Hutchison, is an absolute favourite of mine. I have listened to nearly all Barry's audiobooks to date and have thoroughly enjoyed everyone of them and will be listening to them more than once. I have had the best laughs listening to this book and the entire series. Makes a very entertaining drive to work.

Audiobook narrator, Phil Thron, is my all time favourite narrator after first hearing him with another of Barry's books "The Sidekick's initiative'. Phil is an amazing narrator, bringing the characters personalities alive and the bloopers he includes at the end of many of his narrations are an excellent touch. I follow Phil on Facebook and his appreciation of his audience is very evident.

See the team slug it is out, talk it out, yell it out, crash it out and generally do the same shizz they do in the other great books in the series, that you have grown to love. In another Space Adventure! Now with 30% more intelligent villains (well not as brilliant as Kevin) but still none the less smart and very very shiny.

Enjoy Cal scoffing down banoffee pie by the shipload, not getting killed too much and...oh look, cute little elves!

It's a great space space adventure and you won't be space disappointed.

NOT SUITABLE FOR ROBOTS!