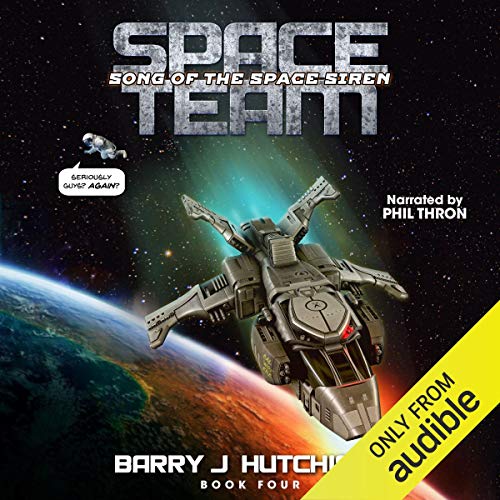 Cal Carver and his Space Team may have lost their ship, but they haven't lost their knack for attracting trouble.

Just hours after setting foot on a new planet, Cal and the crew find themselves caught up in an interplanetary kidnapping plot. Reuniting the suspiciously-silent young victim with her parents on their far-off home world will make Cal rich beyond his wildest dreams. Unfortunately, half the pirates and bounty hunters in the galaxy have the same idea, and they're more than happy to take the girl by force.

With their experimental new ship plagued by problems, a deranged space-warlord determined to watch Cal eating his own arm, and a whole lot of galaxy to get through, Space Team is about to embark on its most dangerous mission yet.

The fourth hilarious instalment in the best-selling Space Team sci-fi adventure series, and the perfect jumping-on point for new listeners.

What listeners say about Space Team: Song of the Space Siren

i love the wild ride of space team i feel like i am a fly on the wall and enjoying the show painted by the author.

I am rocketing through this series too fast! The characters are all well-developed. The stories are supremely entertaining and yet, for all the funny business, manage to contain some profound messages.

Good, but more could have been accomplished

While the book was undoubtedly as good as others in the series, I do feel like less was actually accomplished in the same listening time. This is one of a very few series that can get away with being a bit formulaic, which is good because it's starting to feel that way.

Reviewing the fourth book in a series can basically go like this: If you haven't listened to it listen to the first one. If you were happy with the series until now, carry on with it.

It's neither a shining star nor a turd, but it is in the top 4.

What an underrated gem! I binged this whole series in a month, and I wish there were more available! The characters are quirky, and the stories are compelling. I definitely recommend this series to anyone that enjoys light hearted fun.

I received a free copy of this book and am leaving a review of my own accord.

love these books! keep em coming!! and the performance is so great, the characters really come to life

Going through these fast.

Just buy it. Hilarious and action packed. Tons of crew development with a galaxy sized war kicking off. After the first book I picked up all the rest and each one has been better than the last. As a Bobiverse and Red Dwarf fan I can say these fit right in on the shelf ahh playlist.

I can't imagine after the first ones that you would be hesitating on this one. Really I'm shocked you didn't pre-order it unless you're late to the space party in that case come on catch up.

Ok, first off, I am loving this series so much!!! The cast of characters meshes so well together! I've even got use to the swear filter to the point where I even say "FONK" now! One thing that kind of bothered me a bit but is growing on me... I am a huge huge huge Hitchhiker's Guide to the Galaxy fanatic! For some reason, when I first started listening to Kevin, the ships AI, I couldn't help but think it was copied from Marvin. But he is growing on me. I would have to say that's the only thing that really bothered me. other than that... FONKING AMAZING!

You never know what outlandish aliens, adventure, and trouble the space team will find next. Big fan of the characters and hooked on the series

I enjoy the heck out if these books. The characters and the Star Trek references make it a blast! I recommend.

Getting better and better

I seem to have fallen into a bit of a trap with this authors books. I'm hooked.
Mez and macks character development is coming on nicely and it's full of little surprises and in jokes that keep me giggling.
I'm reading this during lockdown in the UK for Covid-19. This is just the little escape I need right now. It could be worse, could be space parasites. Or even in another relm, zombies.

if you like red dwarf you must try this. the storyline is suitably farfetched and the narration is really good. I will definately be getting the whole series

Terry Pratchett would enjoy these stories I'm sure, and would have been proud to have written them.

Fantastically written, similar humour to The Late Great Terry Pratchett. The scenes with the safety catch, Banoffee Pie, Kevin! So many moments of sheer joy I experienced in listening to this book. At several points I was laughing uncontrollably.
Simply put.... FUNKING AWESOME!!!

A most excellent book!!

Like those before, epic story, side spiltingly funny with awesome characters and narrated brilliantly. Cheers

I loved it overall. But it's not the best in the series. The narrator is great, has awesome comedic timing, bit struggles with the ladies voices. These books seriously need to become a Prime Original Series.

The Best So Far

Space Team Book 1 was the first audiobook I ever bought and I fell in love with the series instantly. With each book being a pleasure to hear, not just because of Phil Thron's amazing narration, but also from a writing stand point.

Book 4 - Song of the Space Siren, is easily my favourite so far. It was an amazing listen and managed to subvert my expectations a number of times. Phil Thron continues his stellar narration, and the writing is sublime. If you're a fan of Space Team, don't hesitate to pick this up. If you're new to the series, I recommend starting the series from the start. But only because the series has been a joy from the very start.

my favorite books series ever...read first 4 books in in 2 weeks..The audio version is well worth it