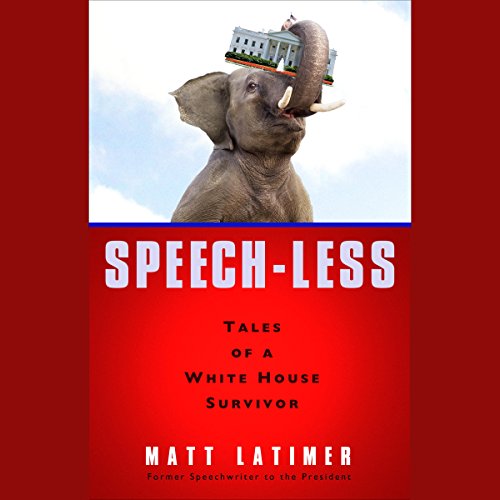 As a young political geek, Matt Latimer dreamed of one day heading to Washington to work for a conservative president and usher in another Reagan Revolution. With the support of his slightly mortified liberal parents, he tried to do just that - but his youthful exuberance began to cool as he moved up the rungs of power.

On Capitol Hill he worked for a Congressman who "misremembered" basic facts, assisted a U.S. Senator who hid from his own staff, and met another who cowed her male aides into carrying her purse.

Finally ensconced in the White House as one of George W. Bush's chief speechwriters, he soon realized that the post wasn't at all what he'd envisioned. Less like Aaron Sorkin's The West Wing and more like NBC's The Office, D.C.'s most prestigious address turned out to be a bizarro world in which the major players were in some ways mirror opposites of their public images.

I thoroughly enjoyed this book. Even though I clearly do not share Mr. Latimer's political views, I thought his insights were very elightening. As you might expect there are times where the author is clearly trying to defend both his philosophy and those who have been political allies, but on the whole the author is extremely honest and candid, which merits considerable respect.

One of the part of this book that I found most distressing was how Mr. Latimer was consistantly hired for jobs for which even he admits he was grossly underqualified. He then rails on the very same practice when Mr. Rove applies it to hiring for the Pentagon. An interesting bit of selective memory.

I recommend this book to conservatives, and especially to liberals, not because you will agree with him, but because it is a very interesting historical look at the inside workings of the Republican party and a presidency plagued by self-destructive tendencies.

I would warn prospective readers that the author speaks fondly (and consistantly defends) such unlta-conservatives as Ann Coulter, Don Rumsfeld, and the most conservative members of congress. If you strongly disagree with this approving view, you will find some views of the author to be frustrating. I would urge you to look past those views to fully appreciate the historical significance of the story and the observations.

On a personal note, I thoroughly enjoyed his perspective on the 2008 election, and specifically his views on one Sarah Palin. I wont give away the specifics, but I felt quite vindicated that I could find common ground with such a conservative individual as Mr. Latimer.

Summery: An excellent and candid perspective on a career in politics as a Republican. Very little "liberal bashing," so Liberals should feel safe reading and appreciating this book.

Yes, good inside stories of what goes on behind the scenes in D.C.

He sounded like he was reading to a bunch of kindergardeners

The book is interesting and well-written. I've recommended it to friends who are interested in communication and politics...but that narrator REEKS. Unlike a previous reviewer, I did not find him arrogant, rather I found him consistently LAME. His wimpy style did not work in this piece and he does the writer a disservice.

Political junkies will enjoy this book -- liberals will rejoice over the skewering of Karl Rove but gnash teeth over the worship of Don Rumsfeld. Conservatives will also have mixed feelings over the betrayal of confidences.

The choice of Lincoln Hoppe as the reader seems inspired as he captures Lattimer's voice(tone)and that of George W. Bush.

The frequent references of TV and movie characters offers a glimpse into Lattimer's worldview as one in which most problems can be resolved in 22 minutes.

The best parts of the book is when the author quotes someone else. Unfortunely, most of the book seems to revolve around what a great speech-writer he is, and how the other speech writers are jealous.

Also, I think he often misses the joke, when he recalls his employer's words literally.

Good book but the most annoying narrator!

This is a great book. Highly recommend it. But I was glad it was finished (the audio book that is) because the narrator's tone was the MOST annoying I have ever experienced. It was narrated in a glib, sarcastic, and at times arrogant tone. It sounded like that annoying guy in the old Isuzu commercials. I could not take it. I dont know if the author intended that tone in the writing or it was creative license, but do sample the audio before you buy and know that the tone you hear is throughout the audiobook. I would have recommended a more narrative style with maybe some dry humor, but not the relentless sarcastic pantameter!

Told from the perspective of a man who was something that amounted to a page in the white house, we are graced with his perspectives and opinions on politics, current events, and modern historical figures. The book came across as childish and the only thing that could have devalued the narration was the narrator himself. I was surprised to find that it was not the author actually reading the book. Very poor on both ends. I learned about this book through a Fresh air interview. The interview was much better than the book. The portions with Rumsfield were somewhat insightful but that was always clouded by the writer's shallow perspectives. You will find no major speeches authored by this fellow. He was more of a cue card type of writer making cocktail blurbs for famous people.

On the other hand, folks who are fans of Sarah Palin will find this a literary masterpiece.

Double the speed until Ch 4 then listen intently after from Rumsfeld, then to the GFC.