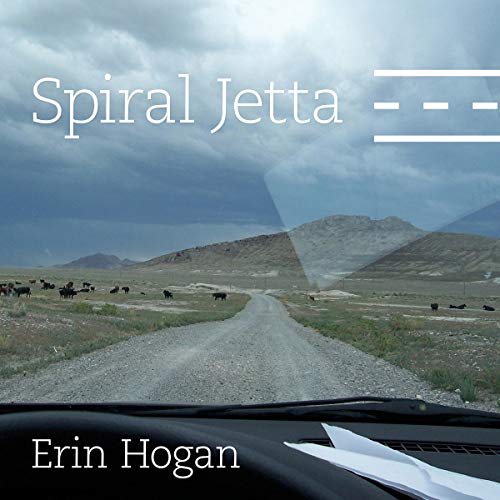 Erin Hogan hit the road in her Volkswagen Jetta and headed west from Chicago in search of the monuments of American land art: a salty coil of rocks, 400 stainless steel poles, a gash in a mesa, four concrete tubes, and military sheds filled with cubes. Her journey took her through the states of Utah, Nevada, New Mexico, Arizona, and Texas. It also took her through the states of anxiety, drunkenness, disorientation, and heat exhaustion. Spiral Jetta is a chronicle of this journey.

A lapsed art historian and devoted urbanite, Hogan initially sought firsthand experience of the monumental earthworks of the 1970s and the 1980s - Robert Smithson’s Spiral Jetty, Nancy Holt’s Sun Tunnels, Walter De Maria’s Lightning Field, James Turrell’s Roden Crater, Michael Heizer’s Double Negative, and the contemporary art mecca of Marfa, Texas. Armed with spotty directions, no compass, and less-than-desert-appropriate clothing, she found most of what she was looking for and then some.

“I was never quite sure what Hogan was looking for when she set out...or indeed whether she found it. But I loved the ride. In Spiral Jetta, an unashamedly honest, slyly uproarious, ever-probing book, art doesn’t magically have the power to change lives, but it can, perhaps no less powerfully, change ways of seeing.” (Tom Vanderbilt, New York Times Book Review)

“One of the funniest and most entertaining road trips to be published in quite some time.” (June Sawyers, Chicago Tribune)

“Hogan ruminates on how the work affects our sense of time, space, size, and scale. She is at her best when she reexamines the precepts of modernism in the changing light of New Mexico, and shows how the human body is meant to be a participant in these grand constructions.” (New Yorker)

What listeners say about Spiral Jetta