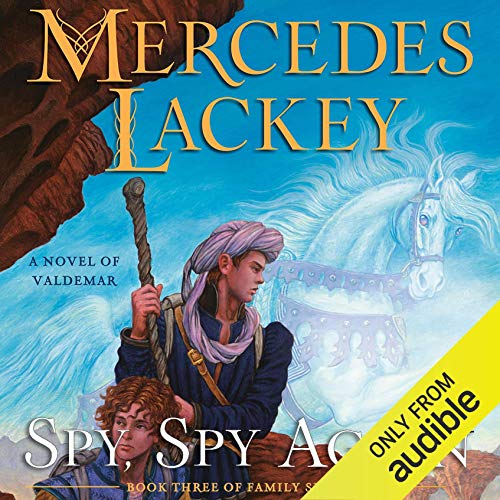 In this third novel of the Family Spies series, set in the best-selling world of Valdemar, Heralds Mags and Amily's youngest child must follow in his parents' footsteps to protect both his family and the realm.

Thirteen-year-old Prince Kyril and Mags and Amily's 14-year-old son, Tory, "share" the Gift of Farsight - although neither of them are Chosen. They are self-trained, though currently, their shared Gift only allows them to see what is happening with their immediate family members.

After much debate, the Herald's Collegium has decided to test and train them anyway. That's when the surprises start. They do not share a single Gift; they have two complementary Gifts working together in a way that the Heralds have never seen before. Tory is the Farseer - Kee's Gift is to extend his range beyond a few dozen feet.

Their Gifts become crucial when Mags gets a desperate message from his cousin Bey, the head of the enigmatic assassin-tribe, the Sleepgivers. Bey's eldest daughter has been kidnapped, but he doesn't know why or by whom. He's calling in the debt Mags owes him to find his daughter before it's too late.

Tory is certain that if anyone can find her, he can. But that will mean traveling out of Valdemar into an unknown, dangerous country. And it will mean taking a Royal Prince with him.

For the love of dog, can she not just

I love Valdemar, and I love Mags (who sounds like he has developed a two pack a day habit). I wish that there weren't so many inconsistencies. "It is the tale of twins who married twins." Except that now, Mags' father is an only child. It drives me batty! It is a problem in all of the books I have read. I. e. Bazie fought with the Tedrals 20 years ago, but Elspeth is 8 years old. (Take a Thief) Ms. Lackey needs a fan group to help her keep it all straight. Or, she could just read the relevant passages in the earlier books.

This was a wonderful story-but the person who narrated it was not so good. Odd times for adding infliction, mispronouncing words (who sees the word briskly and pronounces it as BRUSKLY?!?) The story had a lot of new information about Mag's family and filled in some gaps as well as giving us a good grounding on his extended family with updates on how they are now. I really enjoyed the story line, it had adventure, fun, and some interesting new characters who I hope we get stories on later to finish out the family.

I was worried that NP's narration skills had fine but when I heard the sample, but fortunately he's performance is on par with his previous ones.

People... BRUSQUELY is, in fact, a real word. NP is not mispronouncing anything.

I'm also happy to report that this is much better than Eye Spy in my opinion.

What’s not to love?

Another wonderful addition to an already brilliant series! You can’t write them fast enough for me!

Storyline was a bit disjointed to start but improved over time. It was nice to pick up some previously developed characters and bring them back! I felt the ending was rushed and could have had more storyline this was disappointing. As always I love the Valdemar stories and characters!!

Mercedes Lackey continues into the next generation after Mags and Amelie, following the adventures of their children into the hazardous realm of Karst. Apparently the female Sunlord has moved, as the Karst priests and their demons are back to their old tricks. Lackey and her masterful narrator Nick Podehl once again spin a tale of Valdemar that is a pleasure to hear.

interesting read. leaves it open for more stories after. such a great author. been reading this author a long!

One of Mercedes Lackey's best yet. I may have to go back and listen to this series again immediately to recapture the emotions.

What Happened to Nick Podehl??

I have all the Mag's audio books (The Collegium series, The Herald Spy series and the first two Family Spies books), and up to now they have all been brilliantly performed by Nick Podehl, until this one. For some reason Mr Podehl just sounds as though he's never read a book before, really amateurish. Nick Podehl is one of my all time favourite Narrators, (the man of a thousand voices and characters and always very professional) so I don't understand what happened with this audio book. The printed version of the book has received fantastic reviews, and the audio version should have been awesome. I couldn't listen to it. I am so disappointed. I'll read the printed version and hopefully I'll enjoy that more than this audio version. :-{{