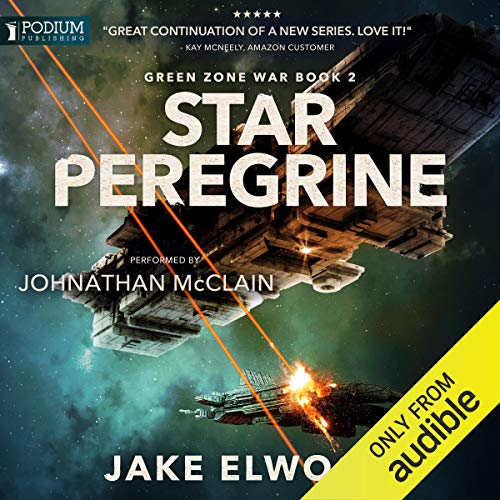 A desperate captain. A crippled ship. An impossible choice.

The frigate Kestrel has been shot to pieces. She’s out of fuel, stranded deep behind enemy lines. It looks hopeless. But Tom Thrush, junior lieutenant and acting captain, has sworn he’ll get his people home.

Escape means fuel, and that means taking it from the enemy. A daring raid gives the Kestrel a fighting chance - but a rescued prisoner has some disturbing news. A ragtag local militia has put together a fleet. The fleet is gathering - and it’s about to blunder into a trap.

There’s only one way the militia fleet will survive. The battered, exhausted crew of the Kestrel must turn their backs on safety and plunge once more into battle. They’re hurt. They’re scared. But they have their duty. The Kestrel is a ship of war, and she will not die easy.

Having liked the first book I was disappointed in the 2nd. The book does little to advance the plot, it seems to constantly spin its wheels on the same topics and some characters, including Tom, show no growth. The science is also terrible. I don’t expect perfect science in a Space Opera but its pretty bad. As an example. There is a planet located in deep space with an atmosphere. No planet would have such as it would have frozen and been locked up in the planets surface. It is also highly unlikely such a planet would have a molten core for that reason and the lack of gravitational tidal forces acting on the planet. This is all basic stuff. Hard Pass.

Tom has finally, albeit uncomfortably, accepted his responsibility as commander of the Kestral and is often faced with life and death decisions as he attempts to make all correct decisions when faced with saving stranded civilians in the path of Dawn Alliance (DA) invasion and returning his reduced crew and refugees back to home base Garnet. We find out that Garnet was attacked but were able to repel DA but the extent of the damage to the United Worlds (UW) fleet is unknown. Tom also rescues some other merchant ship captives from DA and he becomes infatuated with one of its crew which adds another layer of difficulty to his decision making challenges. Also, Alice Rose role has blossomed into that of a secondary MC character even as she faces distrust from the Kestrel crew and disfavor from some of her pirate crew members.

Although he had been lucky on his decisions to save captive civilians over heading straight to Garnet, his luck eventually runs out and his crew and refuges pay a steep price.

Tech makes no sense and actor’s performance is terrible.

Windows on warships in space make no sense. The tech is inconsistent and nonsensical. The author’s idea of space combat is odd. The supporting characters are all one-dimensional and frankly boring.

The actor doing the reading constantly puts the wrong emphasis on the wrong word or the wrong syllable within a word. It’s distracting. He sounds like a bad William Shatner impersonator. He also changes accents for characters, sometimes mid-sentence.

Okay! I saw a rating for the first book that gave only 1 star! Thankfully; I ignored it or I would have missed an excellent and well thought out story. I enjoyed this book so much I WILL be buying the third too.

Please do not be misled by people who rate books as 1's I think it reflects more their character and not the books. There are only a few authors that can tell a good story in science fiction and Jake Elwood is certainly one of them. I have enjoyed all three of his previous books and I am eager to get this review finished so I can start the forth (3rd in this series).

Do yourself a favour, This series is well written and narrated and the story is far from slow. It is in my opinion more than worth either the credit or purchase price.