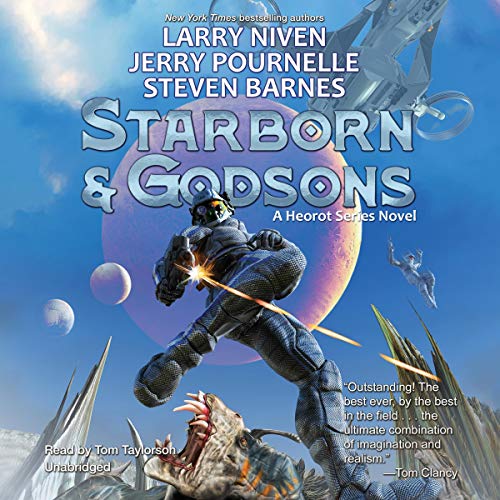 Avalon was thriving. The cold sleep colonists from Earth had settled on a verdant, livable world. The fast and cunning predators humans named “grendels” were under control, and the mainland outposts well established. Avalon’s new mainland hydroelectric power station was nearly complete, and when on-line would compensate for the nuclear power systems lost in the Grendel Wars. Humans would have power, and with power came the ability to make all the necessities for life. They would survive.

They would not survive as a spacefaring people.

What they were losing faster than they knew was the ability to get to space. But unbeknownst to the planet-bound humans, something was moving out there in the stars, decelerating at a rate impossible for a natural object. And its destination was Avalon. The most probable origin was Earth’s solar system.

This is a novel of first contact - between the human Starborn and the self-named Godsons who followed on, between the first generation of Avalon-born humans and their descendants, and between humans and the almost ineffably alien species native to their new world....

What listeners say about Starborn and Godsons

excellent read, my only problem is that the narrator tended to talk a little too quickly and was just short of tripping over his own word.

The addition of Steven Barnes is so seamless it took three chapters before I could distinguish his out of the three voices. something I always loved with Niven & Pournelle you never new who was singing harmony and who was carrying the tune.
I hope Steven Barnes and Grand Master Niven collaborate again or at the least Mr Barnes continue writing known universe stories.

A good wrap up

I enjoyed the story and narration. if you enjoyed the first (and even if you skipped the second) you'll probably like this. there were a couple of kumbaya moments but it wasn't bad.

Third in the trilogy. Follows the storyline with a few edits. Excellent if you enjoy the author’s collaborative work. Very good character development, plenty of action consistent with the story.

Really enjoyed this. Great way to end the series. It's a shame there won't be more.

When I read the first book

When I first read book one years ago I was impressed. Then again, there are a bunch of books by these guys I love. I’m sadden to understand that this will be the last in the series as it seems to be the gateway to another set of books.

Excellent story and it works into the entire mythos of Avalon.

truly a fine ending to a great series

from the very beginning this book started out strong all in its own but when it meshed in with the existing stories before it it became a full circle series. I only hope the Larry Niven will do the same thing for the interval trees series.

It’s always a poignant thing to read somebody’s swansong. This then, the final canonical instalment in the Avalon universe, can be forgiven for the shortcomings that make it the weakest of the four. Despite The relative inconsistency in pacing and character development, and the somewhat strained plausibility of the interactions between those characters, this was the conclusion to the series that it had to have, a series I first discovered in 1993 when I first read Legacy of Heorot. I still enjoyed this greatly, and found generation to be of a particularly high standard.

Struggled to pause and attend to real life.

I heartily recommend the entire series, but I felt the most satisfaction with this book.